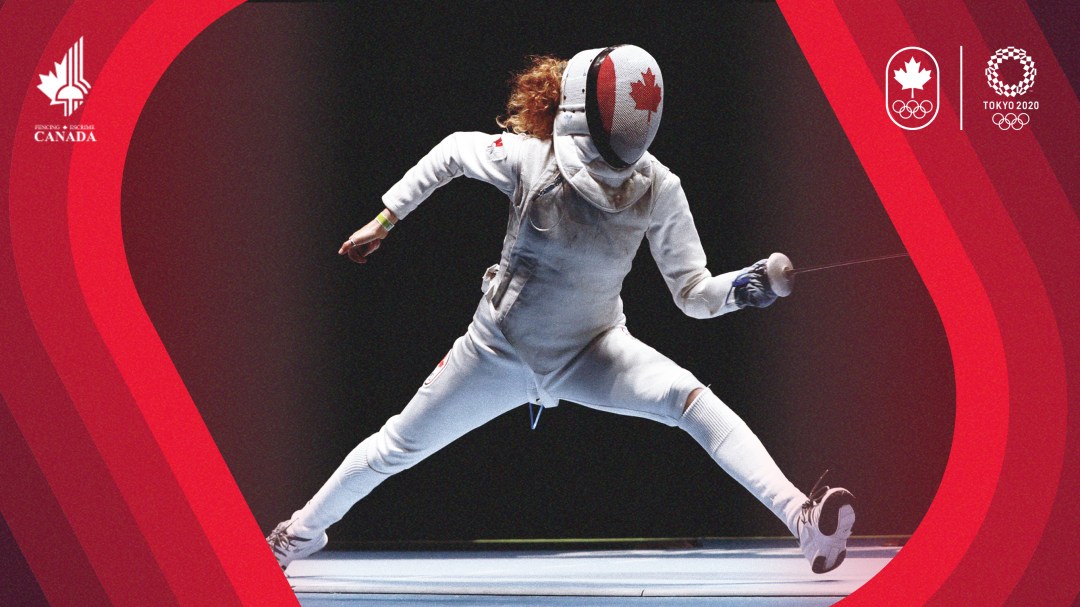 This summer, Canada will have its largest Olympic fencing team since Beijing 2008.

Five men and four women will wear the maple leaf on the piste at Tokyo 2020.

The size of the team can largely be attributed to Canada qualifying both the women’s and men’s foil teams, the first time since Seoul 1988 that Canada has achieved that.

The women’s foil team will be composed of Jessica Guo, Eleanor Harvey, and Kelleigh Ryan, who all helped Canada to be ranked sixth in the world. They will also compete in the individual foil event. Alanna Goldie will be the travelling alternate.

Set to make her Olympic debut at just 15 years old, Guo is currently the top-ranked Canadian in women’s individual foil at number 15 in the world. This year, Guo was crowned the 2021 World Champion at the cadet level and won a world championship bronze at the junior level. At 14, she became a double silver medallist for Team Canada at the Lima 2019 Pan Am Games in the team and individual foil events.

Harvey will be competing in her second Olympic Games, where she will look to pick up right where she left off at Rio 2016. During her Olympic debut, she earned Canada’s best-ever Olympic result in an individual fencing event, finishing seventh after upsetting world number one, Arianna Errigo of Italy, in the women’s foil competition.

Following the Games, Harvey continued to write her name in the history books, becoming the first Canadian female foil athlete ever to win a FIE Grand Prix medal when she finished third at an event in Shanghai in 2018. At the 2019 Pan American Games, Harvey captured three medals, including individual foil bronze and team foil silver.

Ryan is also set to make her first Olympic appearance this summer. As a member of the national team for over a decade, Ryan has competed at each edition of the FIE World Championships since 2009. She also previously represented Canada at the 2011 and 2015 Pan Am Games At the latter, she won a gold medal in front of a home crowd for her efforts in the team foil competition.

On the men’s side, Maximilien Van Haaster, Eli Schenkel and Alex Cai will compete in foil. Blake Broszus will be the travelling alternate.

Van Haaster will be making his second consecutive Olympic appearance. After achieving a career-high world ranking of 23rd during his 2017-18 season when he also had a career-best finish of 16th at the world championships, the Montreal native captured two bronze medals at Lima 2019 in the individual and team foil events.

Schenkel, who was also part of that team foil bronze at Lima 2019, will be competing in his first Olympic Games. He also represented Canada at the Toronto 2015 Pan Am Games and four editions of the FIE World Championships. .

Cai is also making his Olympic debut. Just three years ago the 20-year-old made his senior international debut at a Grand Prix event in Anaheim, California. Since then, Cai has been named to the senior national team and helped Canada win silver in the team foil competition at the 2019 Pan American Championships.

Gabriella Page and Shaul Gordon are set to represent Canada in the women and men’s individual sabre events, each qualifying through the FIE world rankings.

At the 2019 Pan American Games, Page won individual sabre bronze and competed in all three team events, winning silver in foil and bronze in sabre. She also won the individual sabre bronze at the 2019 Pan American Championships. Page competed at her first senior world championships a decade ago when she was just 16 and will make her Olympic debut ranked in the top-30 in the world.

Gordon has represented Canada at two Pan American Games, six FIE World Championships and will now add the Olympic Games to his resume. At Lima 2019, he helped Canada win a team sabre silver and captured a bronze medal in the individual sabre event. He’s currently ranked 22nd in the world.

Canada will have one entry in epée courtesy of Marc-Antoine Blais Bélanger, who qualified by winning the Americas Zone qualification event at the beginning of May. Blais Bélanger is a seven-time Canadian champion who was part of Team Canada at the Lima 2019 Pan Am Games.  In 2018, he posted a top-10 finish in individual épée at the FIE World Championships.