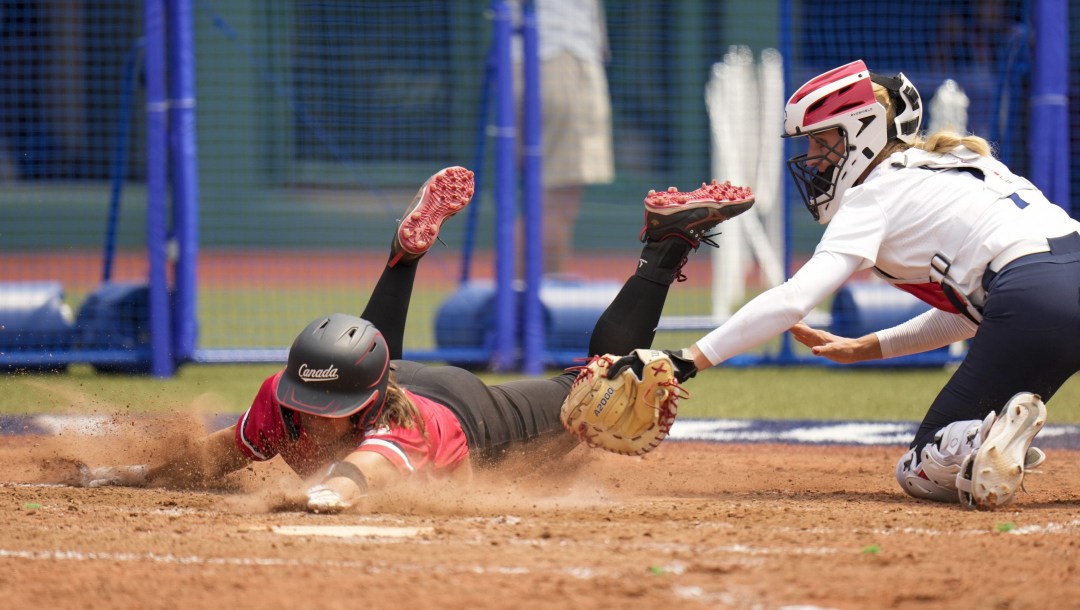 A sixth-inning rally came up just short for Canada’s Tokyo 2020 softball team on Wednesday, falling 1-0 to the United States at Fukushima Azuma Stadium.

Sara Groenewegen, who started the game and recorded three strikeouts through two scoreless innings, pinch hit in the sixth with Joey Lye already on first. Groenewegen hit a double that rolled to right field wall, allowing Lye to try and score on the play. The Americans quickly got the ball home and were able to tag Lye out before she could touch the plate. Groenewegen moved to third on the play but the Canadians were unable to bring her home and tie the game.

“Obviously I hit it well but sometimes that’s not good enough because they make a good play,” Groenewegen said. “It is what it is.”

The sixth inning was the only blemish on American Monica Abbott’s performance. Abbott was nearly unhittable all game long, allowing just one hit and three walks in seven innings of work. While Canada’s pitching staff took the loss, Groenewegen, Jenna Caira, Lauren Regula and Danielle Lawrie combined to allow only one run on seven hits against a powerful United States offense.

Canada’s record now sits at 1-1 while the United States improved to 2-0.

In the top of the first, the Americans had runners on the corners with only one out. After Groenewegen struck out Valerie Arioto, Ali Aguilar was hit by a pitch to the load the bases. Groenewegen worked her way out of the jam, getting Michelle Moultrie to strikeout swinging to end the inning.

After Canada went down 1-2-3 in the bottom half of the first, Delaney Spaulding hit a double off the wall to start the second. Like the first, Groenewegen worked her way out of trouble, striking out Janie Reed to end the inning with two Americans left stranded on base.

Canada got a runner on base for the first time when Erika Polidori walked with two out in the second – but Emma Entzminger struck out swinging to end the inning.

After neither team produced a base runner in the third or fourth innings, the Americans found the scoreboard in the fifth. Haylie McCleney singled to shortstop and then moved to second on a sacrifice bunt. A base hit by Amanda Chidester scored McCleney from second to give the United States a 1-0 advantage. The Americans continued to threaten in the fifth but Regula ended the inning with a strikeout of Bubba Nickles.

Canada nearly tied the game in the sixth when Lye was thrown out at home. Groenewegen remained at third with one out but Abbott worked her way out of trouble, first getting Victoria Hayward to fly out to left field and then getting Kelsey Harshman to strikeout.

“It felt really good going around the bases and I was just hoping that they didn’t make a perfect throw,” said Lye in reference to the well executed relay throw by the Americans.

Abbott returned for the seventh, finishing off her complete game shutout with a 1-2-3 inning.

Canada is back in action on Friday night (Saturday morning in Tokyo) when they face Australia. The squad completes opening round play with a Sunday matchup against No. 2 ranked Japan and a Monday meeting with Italy.