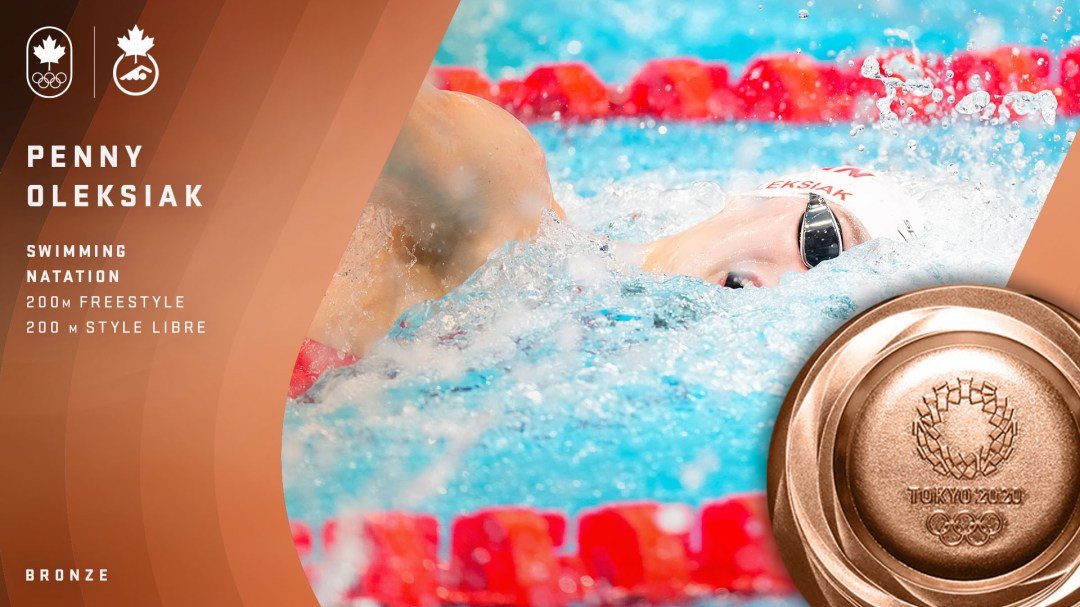 With her second podium finish of Tokyo 2020, Oleksiak now has six career Olympic medals after winning four in her Olympic debut at Rio 2016. She started these Games by winning silver with the 4x100m freestyle relay. Still ahead for her is the 100m freestyle and potentially three more relays — the women’s 4x200m freestyle as well as the women’s and mixed 4x100m medleys, the latter of which is being included on the Olympic program for the first time.

Oleksiak was swimming in lane 7, after qualifying for the final with the sixth-fastest time from the semifinals. She was first to the turn at 50m, ahead of world record pace. At the midway mark, she found herself in third place, but then was fourth at 150m. In a three-way race for bronze, she touched in 1:54.70 to take the last spot on the podium behind Australian Ariarne Titmus, who swam an Olympic record 1:53.50 for the gold medal, and Hong Kong’s Siobhan Haughey, who finished in 1:53.92.

Oleksiak surpasses rowing coxswain Lesley Thompson-Willie and runner Phil Edwards, who each won five Olympic medals in their illustrious careers. She is now tied for all seasons with speed skater Cindy Klassen and dual-sport athlete Clara Hughes, who both own six Olympic medals.

This is Canada’s fourth medal in the swimming pool at the Tokyo Aquatics Centre. After the silver by the 4x100m freestyle relay, Maggie Mac Neil won gold in the 100m butterfly and Kylie Masse added a silver in the 100m backstroke.