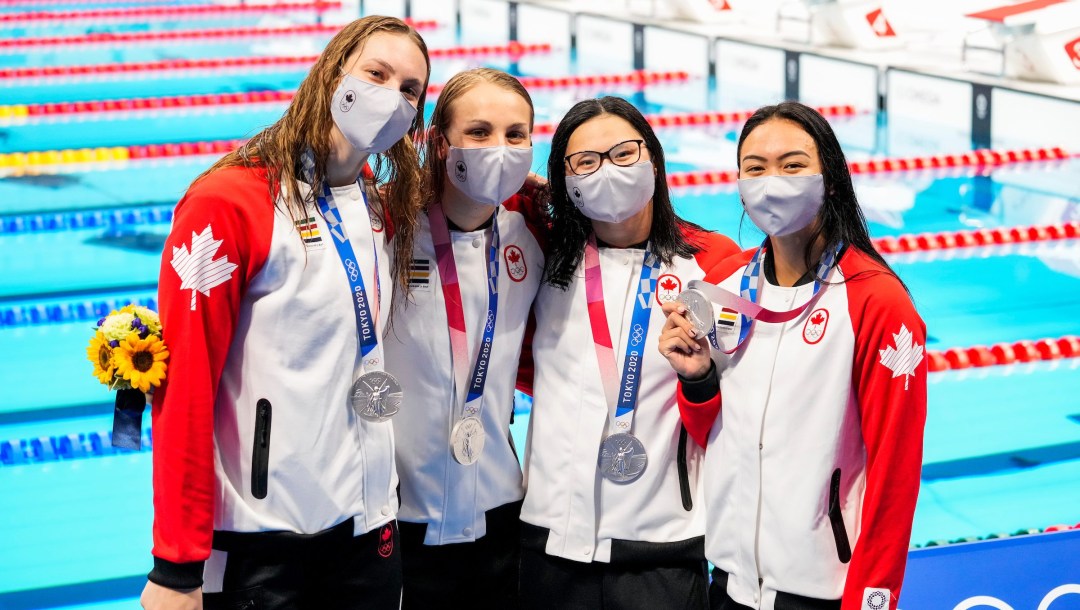 Even while making individual history, Penny Oleksiak was thinking about her team.

The team of Oleksiak, Kayla Sanchez, Margaret Mac Neil and Rebecca Smith raced to silver in the women’s 4x100m freestyle relay on Day 2, Canada’s first medal of Tokyo 2020. Oleksiak swam a dramatic anchor leg in which she overtook American rival Simone Manuel to help Canada achieve its best-ever result in the event.

It’s the fifth Olympic medal of Oleksiak’s career, following her breakout four-medal performance at Rio 2016. She now joins rower Lesley Thompson-Willie and runner Phil Edwards as the only Canadians to win five medals at the Summer Olympics.

But that was hardly top of mind for her as she celebrated with teammates at the Tokyo Aquatics Centre.

“I honestly kinda forgot that I have four others,” said Oleksiak. “I’m excited to bring this one home.”

“We were all hopeful that we were going to medal. We didn’t know what medal it would really be, I think we all just wanted one.”

The group, which also includes heat swimmer Taylor Ruck, are all aged 20 or 21 and have spent half their lives together as friends and teammates. That camaraderie and sense of cohesion helped propel them to the podium in Tokyo.

“We have a lot of faith in each other, a lot of trust in each other,” said Oleksiak. “It’s just crazy now, 10 or 11 years together, on an Olympic team together and winning a silver medal, it’s wild.”

Added Sanchez: “I’m just so proud to be part of this team and swim with these girls. I have a lot of faith in these people.”

Still to come in Tokyo is the 100m freestyle event, in which Oleksiak won gold and set the Olympic record five years ago as she tied with Manuel. There’s also the 4x200m freestyle relay, in which she was part of the bronze-winning side in Rio.

If Oleksiak earns one more medal in Tokyo, she’ll stand alone as Canada’s most decorated summer Olympian. If she earns two, she’ll surpass Cindy Klassen and Clara Hughes to become the nation’s most decorated Olympian of all time.

But when asked about what other hardware could be coming in Tokyo, Oleksiak didn’t speak of an “I”, she spoke of a “we”.

“Hopefully we can get a few more [medals] going and see what we can do.”