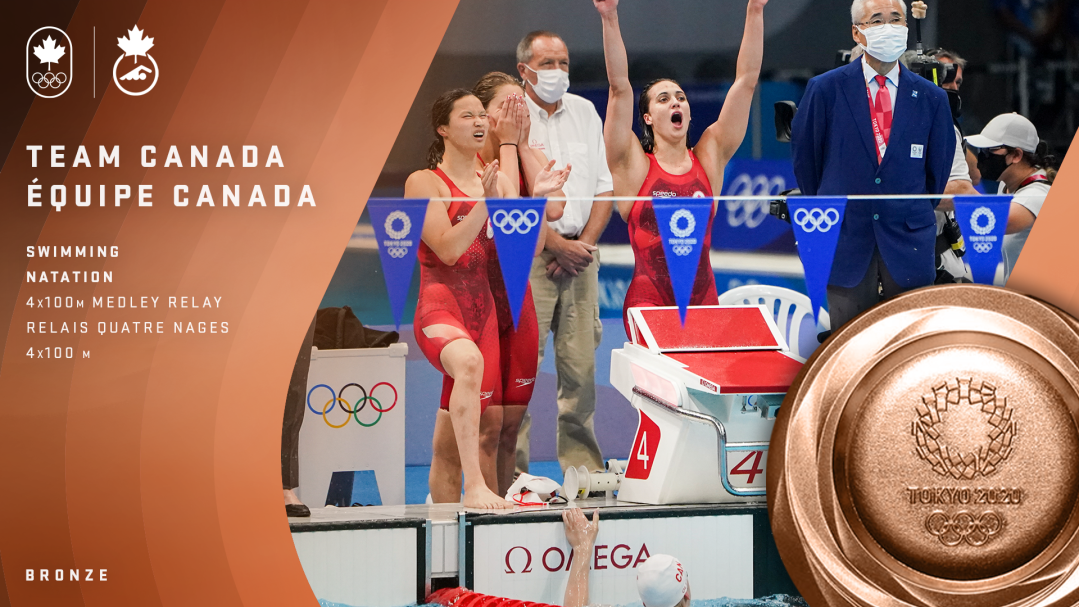 Canada has won its sixth swimming medal of Tokyo 2020 with the women’s 4x100m medley relay adding bronze on the last day of competition in the pool.

The quartet of Kylie Masse (backstroke), Sydney Pickrem (breaststroke), Maggie Mac Neil (butterfly), and Penny Oleksiak (freestyle) finished in 3:52.60. That breaks the national record that that foursome set in winning bronze at the 2019 FINA World Championships.

Swimming in lane 4, Masse was quick off the start and, as she had been in her individual races, was first to the turn. She touched the wall first after her leg as Pickrem dove in. She was third to the turn after her first 50m and was still in that position when she handed the race over to Mac Neil. The Olympic champion in the butterfly kept Canada in bronze medal position throughout her leg as she gave the race over to anchor swimmer Oleksiak. Though she gave chase to Australia and the United States, Oleksiak touched in third place, one second behind the Australians who set an Olympic record in the victory, and 0.87 behind the silver-winning Americans, but well ahead of fourth-place China.

For Oleksiak, the medal is the seventh of her Olympic career and she now stands as Canada’s all-time most decorated Olympian in any sport, surpassing the six won by speed skater Cindy Klassen and dual sport athlete Clara Hughes. Oleksiak has added three medals in Tokyo to the four she won at Rio 2016, winning silver with the 4x100m freestyle relay and a solo bronze in the 200m freestyle.

But she is not alone as a three-time medallist at these Games, a mark also achieved by Masse and Mac Neil. The medley relay medal follows Masse’s two silvers in the 100m and 200m backstroke events. Mac Neil memorably won Canada’s first gold medal of Tokyo 2020 after being part of the silver medal-winning 4x100m freestyle relay.

Also receiving medals will be Taylor Ruck and Kayla Sanchez, who swam the backstroke and freestyle legs during the heats when Canada beat out the United States by 0.01 of a second to qualify for the final with the top time. This is the second medal of Tokyo 2020 for both as they also were key to the silver in the 4x100m freestyle relay.

The six medals match Canada’s total won in swimming at Rio 2016, tying for the third-best output ever in the pool after the 10 from the boycotted Los Angeles 1984 Games and the eight won home at Montreal 1976. For the second straight Games, all of the swimming medals have been won by women.

This is the fourth Olympic medal Canada has won in the women’s medley relay, but the first since Seoul 1988. That bronze followed bronzes at Montreal 1976 and Los Angeles 1984.