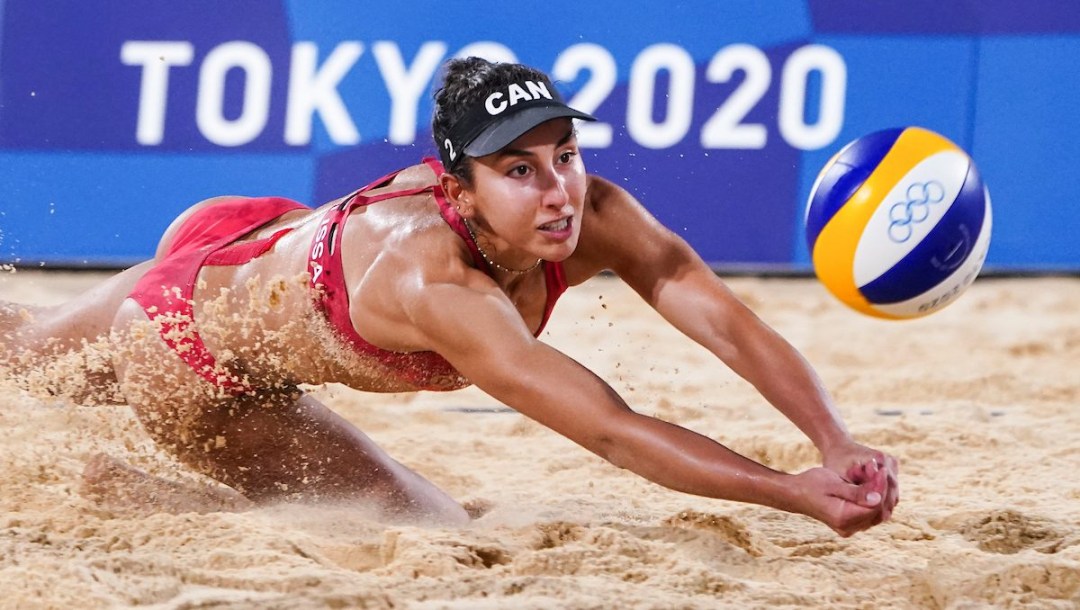 It wasn’t meant to be for Team Canada’s beach volleyball teams on Day 11 at Tokyo 2020.

Both teams will finish the tournament in a tie for fifth place, matching Canada’s best ever women’s Olympic result. Pavan and Bansley finished fifth at Rio 2016, a result first achieved by Guylaine Dumont and Annie Martin at Athens 2004.

Pavan and Humana-Paredes struggled out of the gate, dropping their first set of the entire tournament, 21-15. Canada fell behind 5-1 early and couldn’t dig themselves out of the hole. The Australians never allowed their opponents to gain any momentum.

Canada fell behind early again in the second set but were able to rebound this time. The team built up at 12-8 lead but the Australians never went away, grabbing the next three points to get within one. The two sides would be deadlocked 17-17 and 18-18 before the Canadians were finally able to grind out the win.

In the third set, Australia once again built an early lead. The Canadians were able to get within two points late but could not get any closer, dropping the set 15-12.

Pavan and Humana-Paredes, who were the top seeded team remaining in Tokyo, finished first in their preliminary round group with a 3-0 record and defeated Spain’s Liliana Fernandez Steiner and Elsa Baquerizo McMillan 2-0 (21-13, 21-13) in the Round of 16.

In the earlier quarterfinal, Bansley and Wilkerson struggled to gain any momentum in the opening set. They turned things around in the second, winning 21-18.

The Latvians built an early lead in the third. Canada was able to cut the deficit to 10-8 before Latvia got the next three points and eventually the set and match victory.

“Right now it hurts a lot,” said Bansley. “I was disappointed in my performance today. I think it will take some time to reflect and be proud of what we’ve accomplished. I’m so grateful to be here with Brandie and for the five years that we’ve committed to get here and worked hard together.”

If both Canadian teams had won their quarterfinal matchups, the two would have met in the semifinals. While the final result in Tokyo is disappointing, Wilkerson hopes this is just the beginning of strong Canadian play in Olympic beach volleyball.

“It’s beautiful,” said Wilkerson. “I’m so happy that the whole world will remember and see this. Us four women have known that this was coming for quite some time. We’ve been putting in work for years. All four of us have been putting ourselves out financially, emotionally and mentally to be on the world stage and represent this country. I hope for women in sport it will inspire them and inspire Canadians to pursue beach volleyball as a summer sport and (show) that we’re just a badass country.”