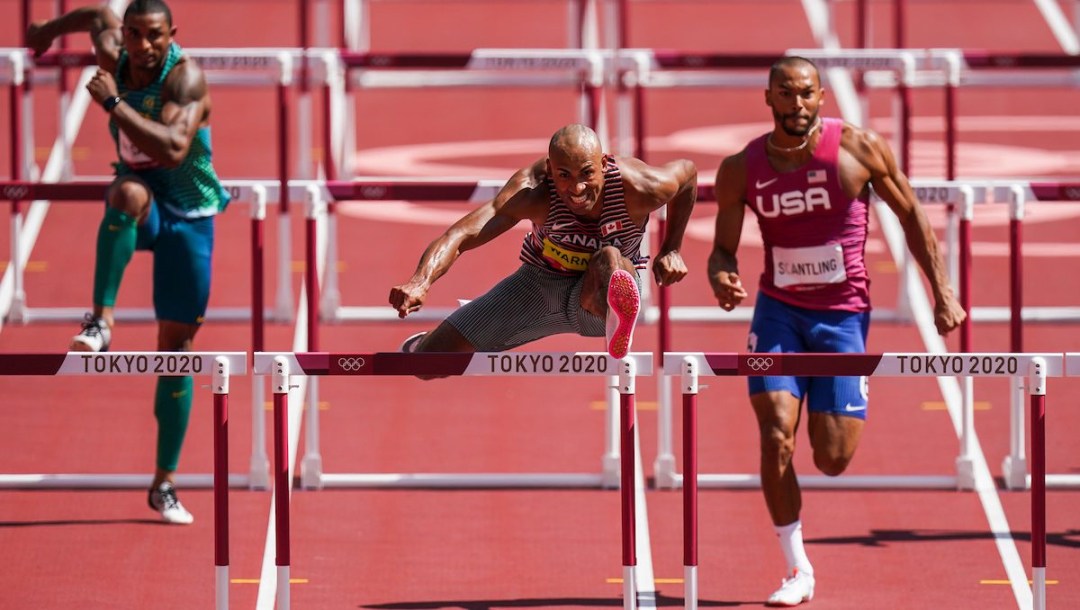 The seventh day of Olympic athletics began with more Canadians in medal contention, highlighted by Damian Warner and Pierce LePage in the decathlon.

The leader after five events, Warner started day two of the decathlon the same way he started the first, racing away from the competition.

Marks of 48.67m (843 points) in the discus and a pole vault personal best clearance of 4.90m (880 points) concluded Warner’s morning. With two events remaining, the javelin and 1500m, Warner sits in the lead with 7490 points heading into the evening session. He has a 221-point margin over Australian Ashley Moloney, currently in second place.

“It was a slow start, my warm up in the hurdles wasn’t the greatest but I had a solid start in the race, and Olympic best which is always a great thing,” Warner said. “Discus was really consistent, it’s what I’ve been doing all year and then pole was a great experience in the heat and personal-best to boot, at the Olympic Games, it’s what we’ve been training for, it’s really special.”

He said the results in the events weren’t the most ideal results, but LePage is still positive with two events to go.

“They didn’t go too bad, I’m still in it so just got to look forward to the next two events to see what I can do,” said LePage.

There was little time for rest for Aaron Brown and Andre De Grasse after the dramatics of the 200m final late on Day 12. They were back inside Olympic Stadium for the men’s 4x100m relay. Jerome Blake and Brendon Rodney completed the Canadian squad for relay the qualification heats.

Going with the order of Brown, Blake, Rodney, De Grasse, Canada got off to a strong start in its heat, executing clean hand-offs to finish in second place, advancing into the final with a season-best time of 37.92, just 0.002 behind China.

“[Andre and I] only had two to three hours of sleep last night so to come out here and run that is pretty good,” said Brown. “Going to get rest and recovery, and be ready for the final.”

“We gave it our best shot,” added De Grasse. “We feel pretty good about our chances so we’re looking forward to tomorrow night.”

In the heptathlon, Georgia Ellenwood got started in the long jump, jumping 5.86m (806 points) before a javelin mark of 44.11m (746 points) set her up with 5243 total before heading into the final 800m event later this evening.

“Right now it’s about finishing the event as strong as I can and having a happy way to end the year,” said Ellenwood. “Every heptathlon I finish no matter how bad it’s going. I’m just happy to be here and I’m going to do my best in the very last event.”

Warner, LePage, and Ellenwood will return once more this evening to close out the decathlon and heptathlon. Anicka Newell will also be in action in the women’s pole vault final.