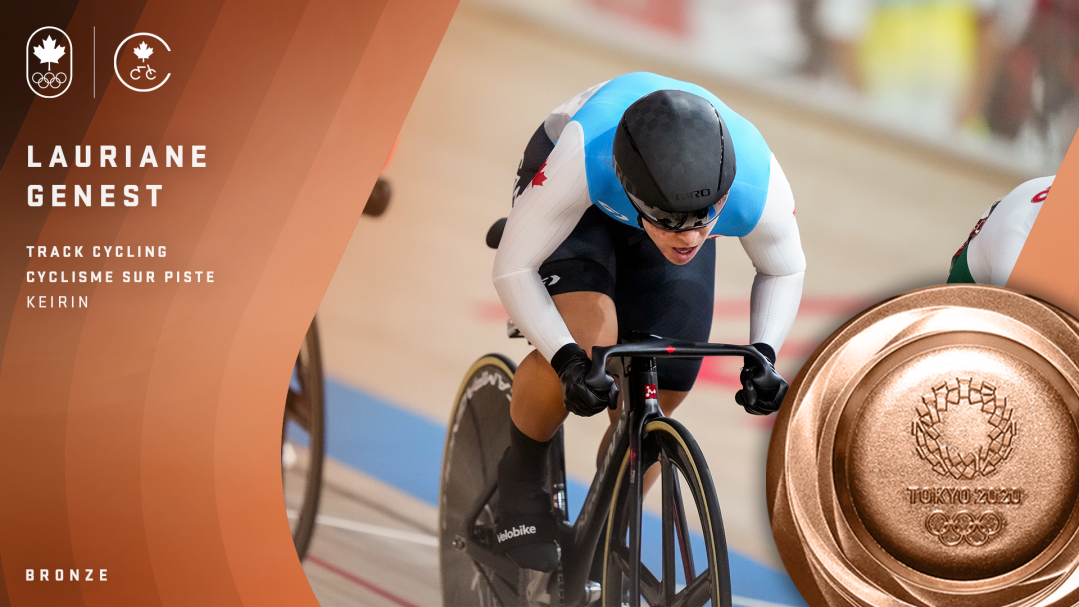 Lauriane Genest has won Canada’s first ever Olympic medal in the keirin, taking bronze at Tokyo 2020, while teammate Kelsey Mitchell finished an impressive fifth in the final.

The eight-lap race begins with six cyclists riding behind a motorized pace bike, called a derny, which gradually accelerates from 30 km/hr to 50 km/hr. With two and a half laps to go, the pace bike pulls off, leading to an all-out sprint to the finish as the riders maneuver for positioning.

In the final, Genest was at the back while Mitchell found herself in the middle of the line behind the pace bike. When it left the track, Mitchell was the first of the two to break, moving herself to the front. But by the bell lap, Genest had gotten herself into position to come across the line in third place behind Shanne Braspennincx of the Netherlands and Ellesse Andrews of New Zealand.

On Day 12, Mitchell and Genest had each won their first round heats to move onto the quarterfinals in their very first Olympic races. When they returned to the velodrome on Day 13, Genest just got through her quarterfinal heat as she finished fourth, the last place that would move on to the semifinals. Mitchell had an easier time of it, as she was first to the line.

The two Canadians were placed in the same semifinal. In a wild finish, Mitchell and Genest finished second and third, just edging out Daria Shmeleva of the ROC to get the last two spots in the final.

Only one Canadian woman had previously won an Olympic track cycling medal in an individual event. That was Lori-Ann Muenzer who won sprint gold at Athens 2004.

These are just the third Olympic Games to include the women’s keirin. Monique Sullivan had been a finalist in the event’s debut at London 2012.

Mitchell and Genest were both identified by Cycling Canada through the RBC Training Ground program. Genest joined the national team in 2018 and won her first career World Cup medal in the keirin in December 2019.