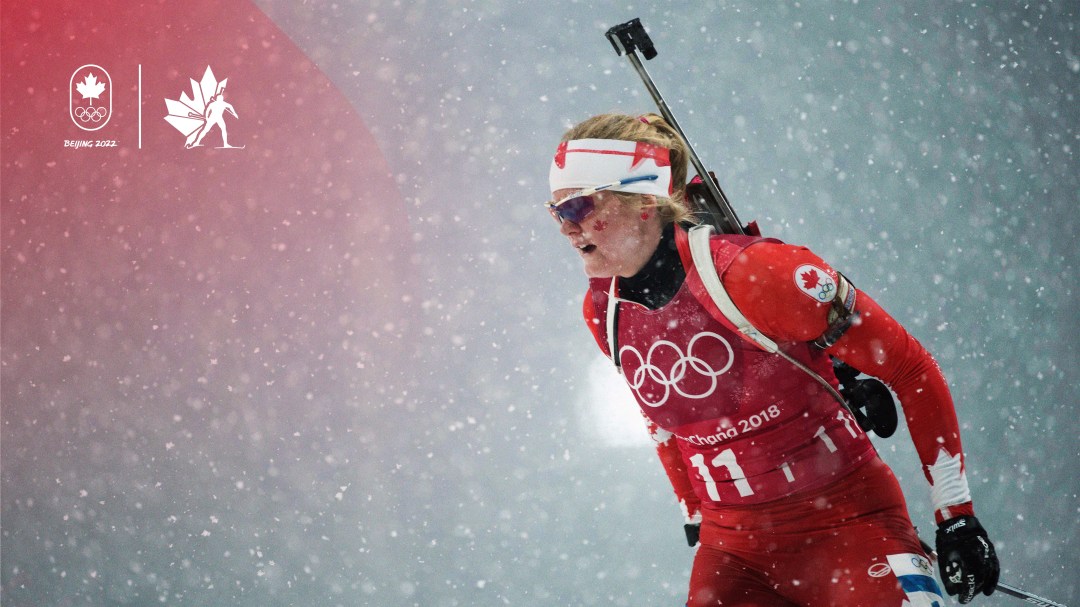 Four returning Olympians will be joined by four newcomers on Team Canada’s biathlon squad for Beijing 2022.

Back for their second straight Games on the women’s team are Sarah Beaudry and Emma Lunder, who will be joined by Megan Bankes and Emily Dickson. Brothers Christian and Scott Gow will welcome Jules Burnotte and Adam Runnalls to the men’s Olympic team for the first time.

Lunder kicked off this season with a career-best sixth-place finish on the IBU World Cup circuit. She hit that high note in the 15km individual event in Oestersund, Sweden. That followed a pair of top-10 results last season for Lunder in two World Cup 10km pursuit races.

“Being nominated to a second Olympic Games feels amazing. I’ve had a great team behind me for the last four plus years helping me achieve this goal, and I have so much gratitude for all of the teammates, coaches, staff, family, and friends who have been with me on my journey!” said Lunder.

Bankes made history in 2017 when she became the first Canadian woman to win a gold medal at the IBU World Junior Championships, taking the crown in the 12.5km individual event. She’s competed at the last three senior world championships.

Beaudry is also a former medallist at the world junior championships, winning bronze in the pursuit in 2014. In the season following her Olympic debut in PyeongChang, she recorded a career-best 12th-place finish on the World Cup circuit in the 7.5km sprint.

Dickson competed in her first World Cup events in 2020, just ahead of her debut at the senior world championships where she, Lunder and Bankes were part of a ninth-place finish in the women’s 4x6km relay.

The older of the Gow brothers, Scott, had a breakout moment at this season’s World Cup opener in Oestersund as he shot a perfect 20-for-20 in the 20km individual event en route to a career-best fourth-place finish on the circuit. He had earned his first World Cup top-10 result last season in the mass start in Oestersund.

Younger brother Christian achieved a career highlight at the 2021 World Championships where he finished 11th in the mass start. He opened this season with a 10th-place finish behind Scott in the 20km individual event in Oestersund.

Burnotte and Runnalls are both recent graduates from the junior ranks. Burnotte competed at his first senior worlds in 2019 while Runnalls didn’t make his first appearance there until 2020.

“It is a much talked about and amazing celebration. I cannot wait to see it from the inside and experience my first Olympic Games,” said Runnalls.

Team Canada has won three Olympic medals in biathlon, all of them by Myriam Bédard. She won bronze in the Olympic debut of women’s biathlon events at Albertville 1992 and then claimed two gold medals at Lillehammer 1994.

Biathlon will take place at the National Biathlon Centre in the Zhangjiakou Zone. Competition begins on February 5 and continues almost daily until February 19.