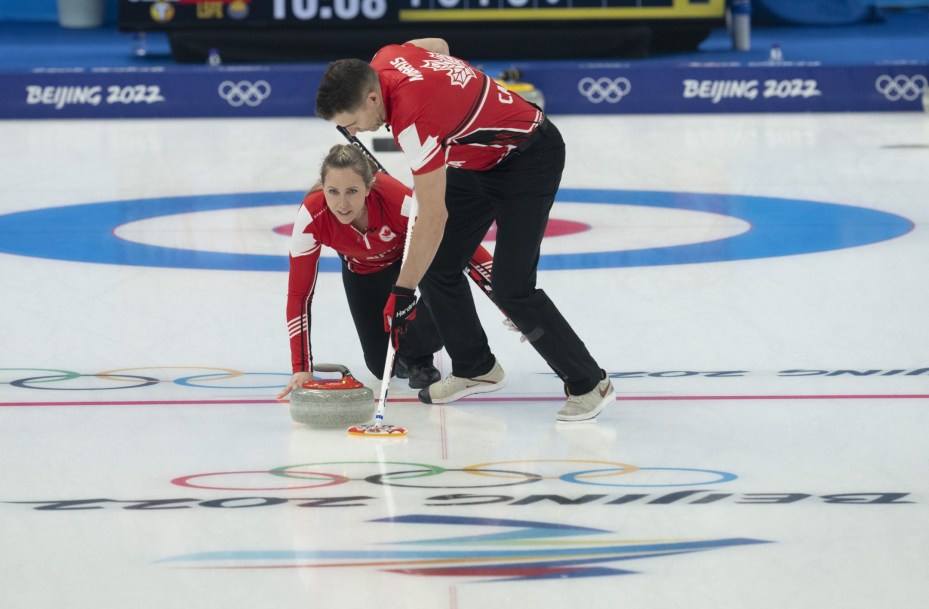 Curlers often speak of being on the “wrong side of the inch” but for Rachel Homan and John Morris it was mere millimetres Monday morning that ended their hopes of defending Canada’s Olympic gold medal in mixed doubles curling.

The Canadian duo lost 8-7 to Italy on a measurement in an extra end.

Homan and Morris gave up a deuce to Italy’s Stefania Constantini and Amos Mosaner in the eighth and then allowed a steal in the extra end when Homan’s last-rock draw was millimetres heavy. It required two measurements to determine Italy had the winning point.

“We were fighting for every inch out there,” Homan said. “I just guessed wrong in a couple of them. That’s kind of the difference. It’s a game of millimetres out there. And yeah, one more shot and we’re in the playoffs. So that sucks.”

The result left Italy unbeaten at 9-0 and Canada fell to 5-4, tied with Sweden for the fourth and final last playoff spot. Sweden beat Canada 6-2 earlier in the round robin to advance into the semifinals.

“Probably the toughest loss I’ve ever had,” said a naturally disappointed Morris. “I just really enjoyed the week besides the heartbreaking finish. We had some opportunities and I felt we managed the game great.

“I really liked the way we played against Italy. With one half a break or one millimetre here or there and we’re playing the semifinals. So there’s no point beating a dead horse. The bottom line is we’re so proud to represent Canada.”

The task before Homan and Morris going into the game was simple: win and keep alive their hopes of defending the Olympic gold medal won by Morris and Kaitlyn Lawes in 2018. Lose and their 2022 Olympic Winter Games experience ends in failure.

Not so simple was trying to find a way to beat Italy, the surprising twosome who had rolled unbeaten through their first eight games of the round robin.

Homan and Morris played their most consistent game of the tournament and got off a good start, holding Italy to a single with hammer in the first and then scoring two in the second. But Italy got one in the third and stole two in the fourth when Morris and Homan both missed runback attempts for a 4-3 edge. For the fifth straight game Canada hasn’t held a lead at the fourth-end break.

But first Morris and then Homan executed excellent draws to the edge of the button to score two in the fifth. Canada got three in the seventh on their powerplay after Constantini’s try for a triple got only two and left Homan a draw for three.

Canada looked in decent shape to take the win in the eighth after a Morris triple and then a runback left Italy with only one stone in the house. Homan passed on a hit-and-stick in favour of a freeze but came up significantly light. Constantini only had to draw the full 12 to get the deuce and force the extra end.

“We were down 4-2 and we had a really good comeback,” said Morris. “I’m really proud of Rachel, she hung tough and fought really hard all week”

The game came down to skip rocks. Constantini, the best shooter in the tournament, made a perfect draw to shot on the side of the button, frozen. Homan had the narrowest of margins to get to shot rock with her draw and was a fraction off.

While the loss to Italy was the final blow that eliminated Canada, Homan and Morris had been struggling to keep their playoff hopes alive for the last several draws of the round robin. They were inconsistent through the first eight games, at times showing the brilliance that was expected of them, at other times seemingly unable to even execute a routine draw.

By the time they got to the Italy game the pair were emotionally drained after their previous two games, both requiring late-end heroics. They escaped with a 6-5 extra-end win over Czech Republic that Morris called the “most dramatic” game he’s been involved in.

Just hours later they went up against Australians Tahli Gill and Dean Hewitt, who Morris had been coaching for the last five months leading to the Olympics. The students schooled the teacher early, building a 7-0 lead that Morris and Homan eventually erased. But Homan was heavy with a last-rock draw in the extra end to hand the win to Australia and turn the Italy game into a win-or-go-home situation.