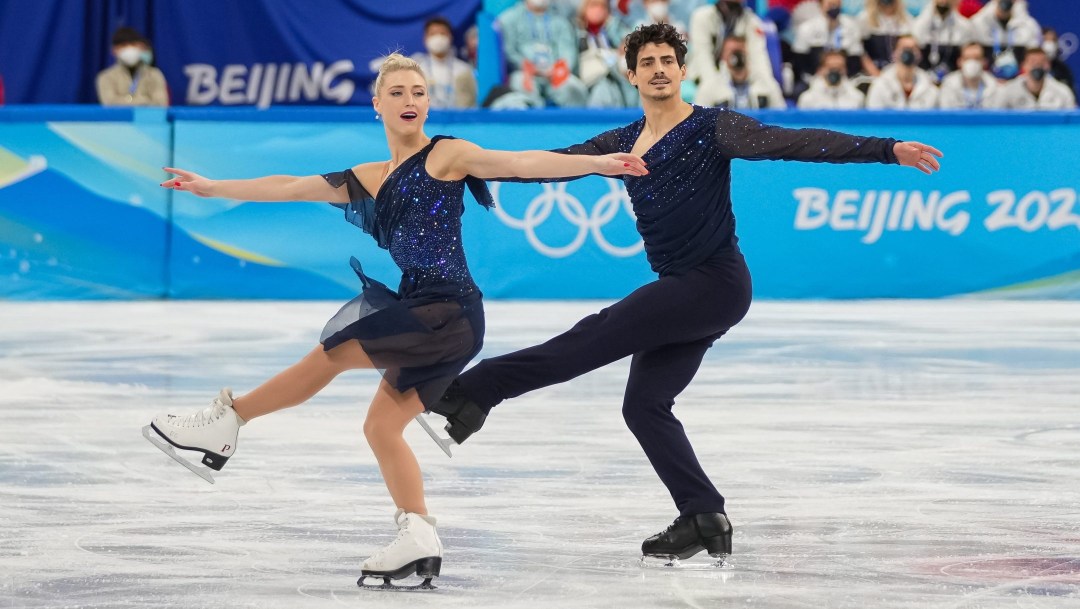 For the first time since it was added to the Olympic program, Team Canada did not win a medal in the figure skating team event.

But there were plenty of positives to take away from the final day of free skates in the pairs, ice dance, and women’s singles events as Canada finished fourth overall.

In their first Olympic skate together, Vanessa James and Eric Radford had perhaps their best performance of the entire season. It was only in April that they announced they would be forming a pairs partnership with the intention of competing at Beijing 2022. Throughout the fall, they were still working through their newness and struggled to skate consistently in their Grand Prix events.

But on Olympic ice, they showed what they are capable of, landing their side by side triple jumps as well as both throws successfully. That performance came a day after James was involved in a collision in practice with an Italian team, which she said left her “a little scatterbrained”.

“To skate like that even with all the bruises and a bit of shock from yesterday, it gives us confidence in the next week and a half leading into the next competition,” said James. “It wasn’t perfection but it’s close to what we wanted to do so we are very, very happy.”

“It’s a big accomplishment for us. It’s a great first part of the competition and of our time here. We started skating together 11 months ago and it has been a super fast development,” said Radford. “Every week we are trying to improve and for it to come together and be able to skate a long program like that at the Olympics it felt really good.”

The individual pairs event won’t start until February 18. In a change from traditional scheduling, the pairs event will be the last to take place at the Games, rather than the first.

Team co-captains Piper Gilles and Paul Poirier finished third in the free dance. But despite their satisfaction with how they performed both their Elton John rhythm dance and their ‘Long and Winding Road’ free dance, they know they haven’t peaked yet in Beijing.

“We are really thrilled to have completed our first event at the Olympic Games. It’s such a mixed feeling to be able to do both of these programs again in the individual event. That’s a special feeling for us. Both programs were really strong, but there were a few moments where we felt could be stronger,” said Poirier. “We are excited there are things that we want to improve upon before the next event. I think it’s mission accomplished.”

“The last quadrennial we had called them ‘programs for the people’,” Gilles said of their recent free dances, for which they have chosen songs that so many people know and love, including Joni Mitchell’s ‘Both Sides Now’ that helped win them a world bronze medal. “So being able to skate them and share the programs that we truly love with them is an absolute honour.”

The ice dance event will begin on February 12.

Madeline Schizas followed up her outstanding short program with another solid performance that again had her finishing third among the women. The 18-year-old Olympic rookie didn’t let an early mistake affect her as she shook off doubling a planned triple lutz to skate clean the rest of the way.

“I’m so happy with the way I skated today. I came into this event knowing that it was really just an opportunity to go out there and skate. Obviously it went pretty well,” said Schizas. “Mathematically, we were staying in fourth place. So I just took it as an opportunity to show what I could do as a skater and put out the kind of performance that I’ve wanted to put out.”

The women’s singles event will start on February 15, the day after Schizas’ birthday.

In other news, Keegan Messing has arrived in Beijing and took to the practice ice for the first time. He’s endured his own long and winding road to his second Olympic appearance. He did not travel on the charter flight from Vancouver with the rest of the team when he was unable to produce the necessary negative COVID tests. But with that finally done, he made it in time to compete in the men’s short programs alongside Roman Sadovsky when those take place on Tuesday morning in Beijing.