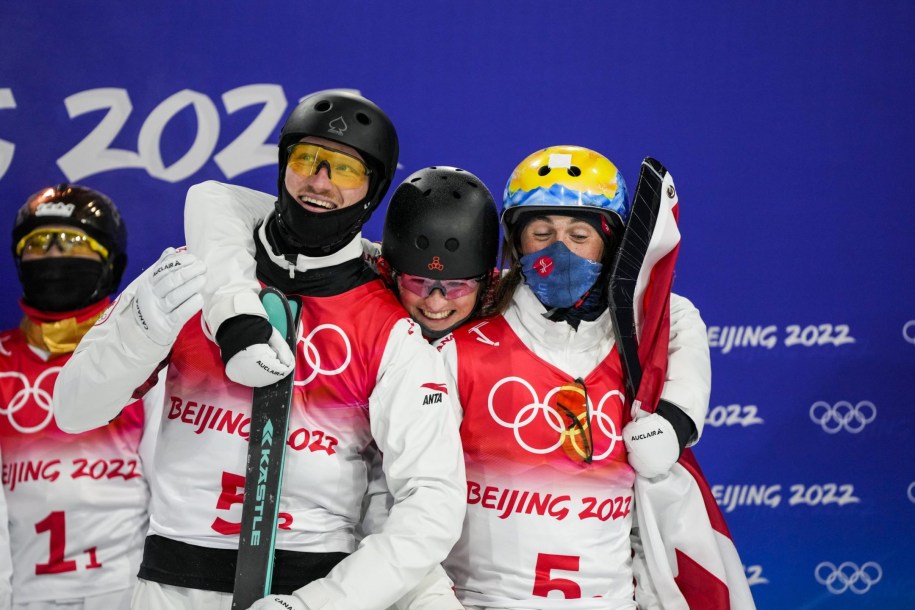 It was an evening of firsts for Lewis Irving, Marion Thénault and Miha Fontaine, bronze medallists in the mixed team aerials event at Beijing 2022, and not just because this was the first time the event had been included on the Olympic program.

To start, it’s the first Olympic medal for the three Canadians. For Irving, it was his first competition of the season, following a difficult year. “It’s incredible, he said. I tore my MCL at the start of the season, and I haven’t jumped once since. So, to come out of this with a bronze medal – I couldn’t ask for more.”

While this marks Irving’s second Olympic appearance (he finished 24th overall in the individual event at PyeongChang 2018) in his 13-year career, Thénault and Fontaine are making their Olympic debuts in Beijing. However, this was the first time competing in a mixed team final at any level of competition for all three.

It’s even more impressive considering the 21-year-old from Sherbrooke, Quebec has only been practicing the sport for about four years. She was recruited by Freestyle Canada through RBC Training Ground program in 2017, just over four years ago. But her 14 years of experience in gymnastics gave her a head start.

“It’s crazy,” she said. “I’ve worked so hard over the last few years. I’m really proud of what I’ve accomplished. It was a quick progression, but I think I have lots left to give the sport. It’s only the beginning for me.”

Fontaine and Irving: Olympism in their blood

Fontaine and Irving had one more weapon in their arsenal: their DNA. Fontaine is the son of Nicolas Fontaine, three-time Olympian in aerials who won silver when his event still had demonstration status at Albertville 1992 and member of the storied “Quebec Air Force”. Irving’s father, Bobby, is a Paralympic alpine skier.

Fontaine was proud to pay homage to his roots with a dazzling team performance. “It’s incredible because everyone performed so well,” he said. “The level of competition was really high, but we also managed to land all of our jumps and take third place. To follow in the footsteps of my family in freestyle skiing is incredible. There are no words to describe it.”

In addition to the natural talent among the trio, the medallists add that it’s thanks to the close-knit nature of their team that they were able to crack the podium. They are proud to show the world that Canada deserves a place among the best of the best in their discipline.

“Everyone gave their all,” Irving said. “Everyone went for those big jumps and landed them – it’s because of this that we won. We’re all friends and all want to see our teammates perform well, and I’m happy that we finished at the top. It’s wonderful to be able to accomplish that with these people [Thénault and Fontaine]. I feel great and I don’t think I could ask for anything else at this moment.”

It’s a special feeling, given that this medal was anything but expected, as Thénault explained: “It’s clear that we weren’t favourites to win, we weren’t even favourites to medal because our team is so young. We put a lot of pressure on ourselves because we know what we’re capable of, but we were definitely the underdogs today.”

While she’s stepped on the podium with two teammates looking to honour their family’s legacy, Thénault sees what her team’s triumph in the mixed event could bring for the future of the sport.