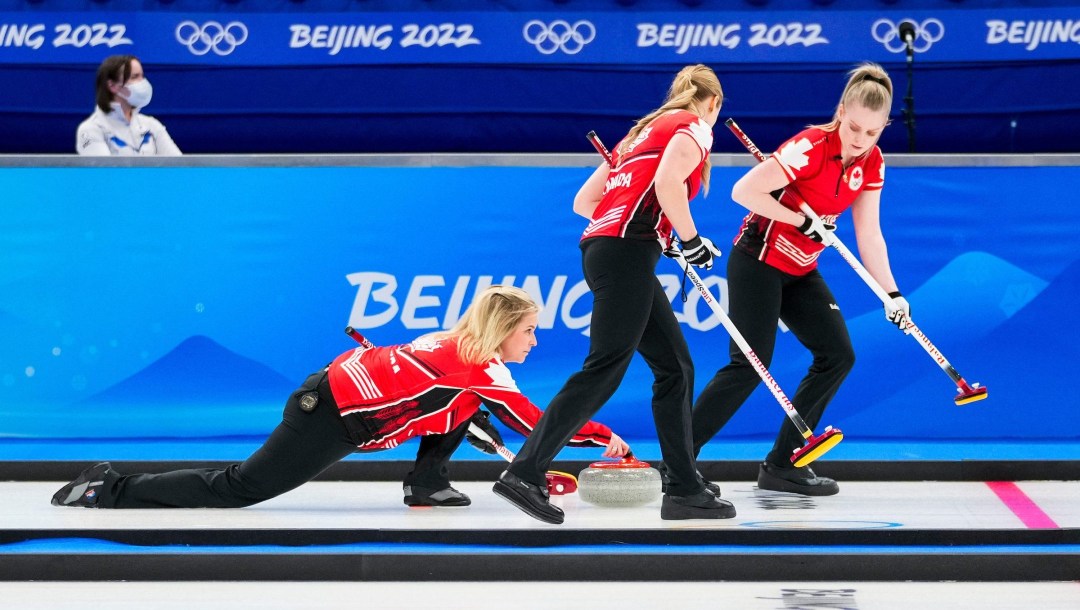 Jennifer Jones bailed Team Canada out of a potential monstrous hole in the first end but couldn’t rescue her teammates in the final end of a 7-6 loss to Anna Hasselborg of Sweden in women’s curling at the 2022 Olympic Winter Games.

Four missed shots by Sweden in the 10th gave Jones a shot for an angled double that would have scored two and given Canada a tie. She got one but missed the second Swedish stone that a measurement showed was second counter.

“We felt really good about it, we had seen that shot before. Just a little unfortunate, just hit it a hair too thick,” said Canadian third Kaitlyn Lawes who is usually very accurate in determining shot rocks. “We thought we were second shot so thought we could go after it. Kind of surprised the measurement didn’t go our way, actually pretty shocked. I would have bet my house we were sitting second shot.”

Three hours earlier Jones, the cool-headed veteran skip from Winnipeg, faced four Swedish counters and calmly drew the edge of the button, totally buried. Swedish skip Hasselborg’s only shot was an in-off that missed. A potential game-killing five-ender for Sweden turned into a steal of one for Canada.

Games are rarely decided in the first end but give up five to Sweden and Canada’s comeback task would have been monstrous.

“I thought the last five ends, even the last nine ends, were pretty good,” said Canadian coach Viktor Kjell. “A bit of a slow start, but the good thing is we’re close in everything we’re doing.”

In a match-up of two of the best women’s teams in the world and the last two Olympic champions – Jones in 2014 and Hasselborg in 2018 – Sweden was in control most ends but couldn’t shake loose of Jones in the later part of the game.

Through seven ends Sweden hadn’t given Canada a real opportunity to score more than singles in three ends while scoring a deuce in the third, three in the fifth and one in seven for what seemed a comfortable 6-3 margin

A wrong technical decision by Sweden in the eighth opened the door for Team Jones to score two and create a hectic chase to the finish. Rather than block Canada’s route to a double, Sweden elected to block the route to score a single.

Desperately needing two to stay alive, Jones executed the perfect double takeout and saved her shooter to count the deuce. Hasselborg drew the full button to out-count two Canadian stones inside the four-foot for a crucial single in nine.

“We fought to the very end, never gave up, made some good shots the last half to give ourselves a shot,” Team Canada second Jocelyn Peterman said of the team’s resiliency and their refusal to panic. “It’s a long week, we’ll take a lot of information from this game and into the next game.”

With the win Sweden improved to 2-1, in a three-way tie for third behind front-running and unbeaten United States and Switzerland, both at 3-0. Canada falls to 1-2 in the 10-team round robin to determine the top four teams that will advance to the semifinals.