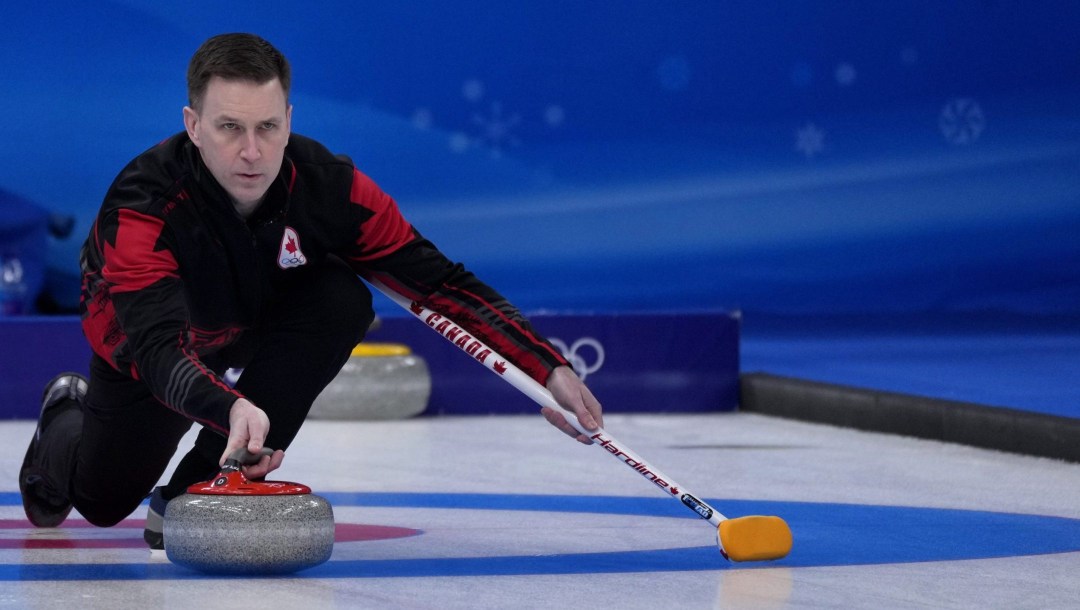 It was a struggle from the first stone through the last, but Brad Gushue made the final shot to get by a stubborn Team China,10-8. That is Team Gushue’s third straight win in men’s curling at the 2022 Olympic Winter Games Tuesday morning in Beijing.

In a game that saw seven multiple-scoring ends, Gushue had to make a precision tap back to score one in the tenth end to preserve the victory. That improved Canada to 5-2 and kept them alone in third place with two games to go in the 10-team round robin.

Canada needs one win in its last two games – against Russia and Great Britain – to advance to the semifinals.

The tenth end got interesting after a runback miss by third Mark Nichols had allowed China to sit two in the four-foot and force Gushue to make the final shot.

“The mistake there was we left the centre guard on Mark’s runback and made it a lot harder than we needed to,” said Gushue, the 2006 Olympic gold medallist. “Fortunately (China skip Ziuyue Ma) over-curled on his last one and left me a relatively easy tap back.”

That nervous ending came after Canada had scored three in the eighth end for what seemed to be a comfortable 9-6 lead. But Gushue played it cautious in nine and that allowed China to score its third deuce of the game to make it a one-point difference into the tenth.

Canada trailed 5-4 at the fifth-end break but once again outscored its opposition in the second half to earn the win.

“It’s the patience we’re shown, but I think it’s more that we’re not giving ourselves as good a chance early on,” said Nichols. “A couple of loose throws by myself trying to maybe be a little too perfect and not getting the right shots. We have to clean up those shots.”

Gushue agreed it has been a grind with no easy games played and no easy ones to come.

“It is patience, it’s a grind,” he said. “You know at the end of this week, whenever you’re done, when your head hits the pillow you’re going to be exhausted. It’s a matter of being patient, trying to make every shot, I know it sounds cliche but that’s what you’re trying to do. We’re trying to play everybody as if we’re playing Brad Jacobs or Niklas Edin or Bruce Mouat.”

Canada, once again starting without the hammer, forced China to take one in the first end before the teams went on a two-point scoring spree. They traded deuces for five ends with the lead changing hands every end through six.

Then Canada got the big game-changing three-ender. Three consecutive missed shots by China, including two runback double attempts by Ma, left Gushue a draw to the four foot for the three.

“Mark made a nice draw, we got a miss from their third and then Mark made another good draw,” Gushue said of how the end developed. “He (Ma) hit it right on the nose, left me a draw for three. That was quite fortunate, we were just hoping to get a deuce there and even if we only scored one we felt we were in control.”

Gushue, who shot a game-high 90 percent, was impressed by the Chinese foursome he hadn’t seen play before.

“I was impressed, they throw the rocks really good. It seems every rock they threw they gave it a chance to make it. They made a bunch against us. We were a bit of sloppy at times.”

Both teams shot in the mid-80 percentile and took advantage of each other’s half-shot misses to get their deuces.

“It probably looks to the viewers like we’re struggling but the numbers aren’t showing that,” said lead Geoff Walker who shot 89 percent. “It seems we’re playing well; it just shows how good the rest of the teams are.”

Canada shot a collective 89 percent while China was at 87 percent.