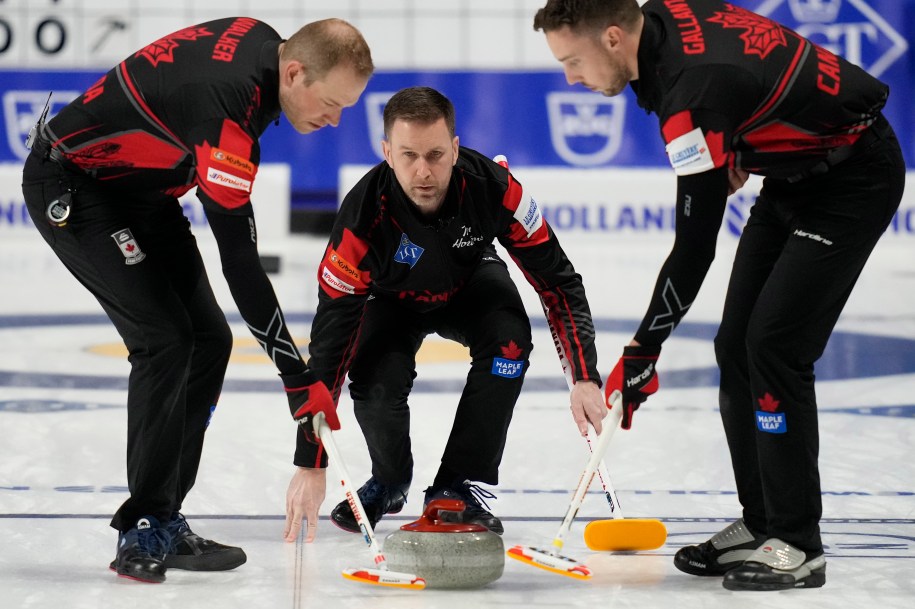 Fresh off an Olympic bronze medal at Beijing 2022, Team Gushue is in the hunt for another accolade: the title of world champion.

The Canadian rink of skip Brad Gushue, third Mark Nichols, second Brett Gallant and lead Geoff Walker qualified for the playoffs at the World Men’s Curling Championship late Thursday night with a resounding 10-2 win over South Korea in six ends. It was a welcome bounceback after a 10-6 loss to the United States earlier in the day.

Canada heads into Friday’s final day of round-robin play atop the standings, with eight wins and two losses. Their final two draws, against Scotland (6-4) at 9 a.m. PT / 12 p.m. ET and Denmark (2-8) at 7 p.m. PT / 10 p.m. ET, will determine where they sit heading into the weekend’s playoffs.

Their closest competitors are second-place Sweden (8-3), who also qualified for the playoffs on Thursday with a dramatic 5-3 victory over the United States. But, as the Swedes have only one draw left, the Canadian rink can assure themselves of first place with two wins on Friday.

A familiar spot to be in

These Canadians have experience in the big events. In addition to the podium finish in Beijing, Gushue and Nichols famously won Olympic gold for Canada at Turin 2006, alongside Russ Howard and Jamie Korab.

This is a third world championship appearance for the quartet of Gushue, Nichols, Gallant and Walker. They won it all in 2017, then finished second in 2018. Both of those gold medal games were showdowns against Niklas Edin’s Swedish rink.

That same Swedish rink handed Canada its first loss at these world championships, back on Wednesday. Could the stage be set for a dramatic rubber match this weekend?