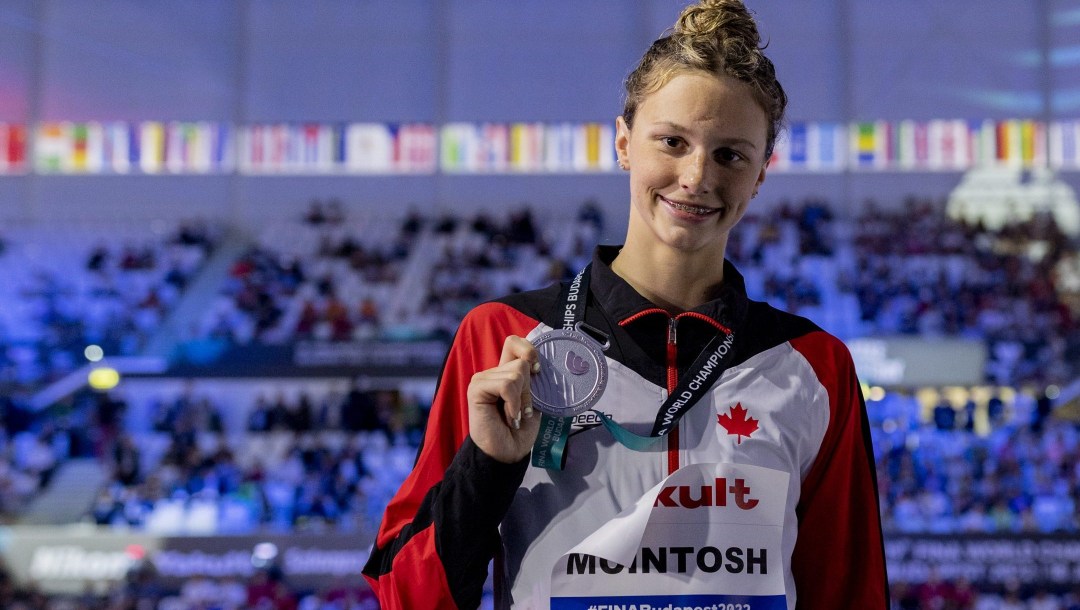 McIntosh is the youngest Canadian to medal at the FINA World Championships since 1986, when 13-year-old Allison Higson won bronze in the women’s 200m breaststroke. At 14-years-old, McIntosh finished fourth in the 400m freestyle event at Tokyo 2020 setting a Canadian record with a time of 4:02.24.

On Saturday, she broke her own National record, while capturing her first-ever long course medal at the World Championships. 15-year-old McIntosh touched in 3 minutes and 59.39 seconds to land on the second step of the podium. With this result, the Canadian becomes one of four women to ever swim the event in under four minutes. Ex-world record holder of the event, American Katie Ledecky won gold and lowered the championship record with a time of 3:58.15.

In the third 50 metres, McIntosh forced her way into second position. At the halfway mark the Canadian and the American held a comfortable lead over the rest of the finalists; Ledecky with a lead on McIntosh of 0.92 seconds and McIntosh 1.19 seconds ahead of Australian Lani Pallister. McIntosh kept with Ledecky to confirm her silver medal, while American Leah Smith pulled into third position to finish in 4 minutes and 2.08 seconds.

The current 400m freestyle world record holder, Ariarne Titmus of Australia was not in competition at these World Championships.

The Canadians were in third after the Sanchez and Ruck finished their lengths. Up third, Mac Neil closed the gab between the Canadians and Americans, who were unable to resist Oleksiak’s final push. Rebecca Smith and Katerine Savard swam during the preliminary races to help qualify the Canadian relay team.

Swimming events at the FINA World Championships will continue until June 25. Next up for the Canadians will be the Commonwealth Games in Birmingham, UK, which begin on July 28.