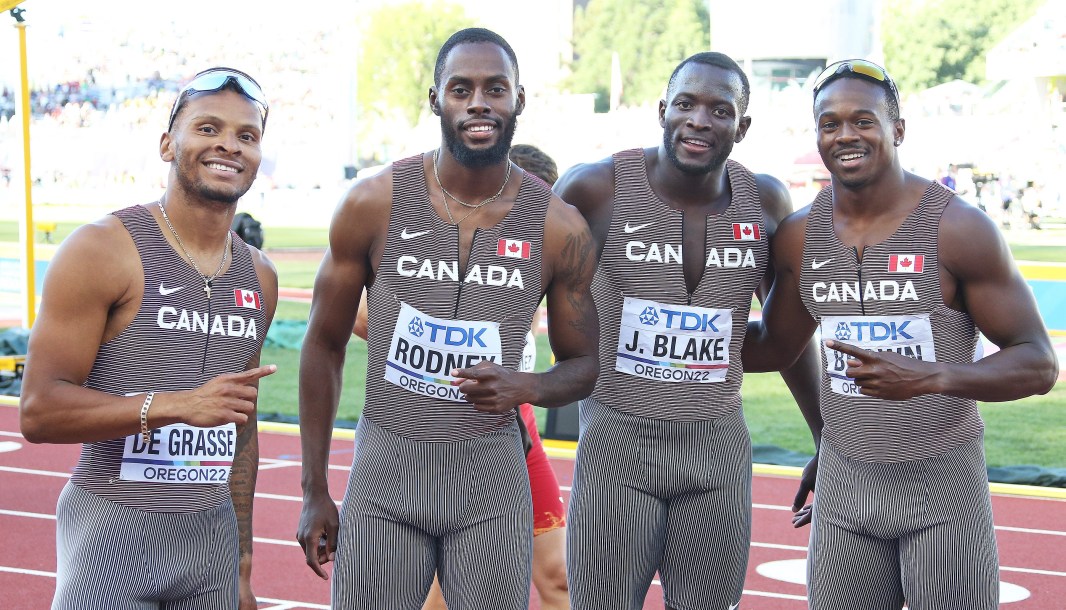 It was a successful night of finals for Team Canada on Day 9 of the 2022 World Athletics Championships in Eugene, Oregon. World Champions were crowned and a bronze medal was won!

The men’s 4x100m relay team of Aaron Brown, Jerome Blake, Brendon Rodney, and Andre De Grasse won the gold medal in 37.48 seconds, setting a Canadian record. The Americans took second place finishing in 37.55 seconds, ahead of the British runners who clocked in at 37.83 seconds.

The Canadian quartet — and silver medalists at Tokyo 2020 — were in third place at the halfway mark, as the British led the race. De Grasse ran the last leg of the race and quickly caught up with the American Marvin Bracy to finish first.

This gold medal caped off a difficult week for De Grasse who was recovering from contracting COVID-19 just a few weeks before the Championships which affected his preparation for this competition. The reigning Olympic 200m champion skipped the event in Eugene this week after failing to qualify for the 100m final.

It is the first gold medal in 25 years for Canada at this event at the World Championships. Robert Esmie, Glenroy Gilbert, Bruny Surin and Donovan Bailey had claimed the title of World Champions in 1995 and 1997 — also claiming gold at Atlanta 1996.

The last Canadian podium in this event at the Worlds dates back to 2015, when Brown, Rodney and De Grasse teamed up with Justyn Warner to win bronze.

Earlier on the evening, Marco Arop claimed third place in the men’s 800m finishing with a time of 1:44.28. The 23-year-old Edmonton-born athlete has been on a roll after only beginning his career six years ago.

The Canadian took the lead after the first 300 meters. He was caught by his rivals in the last 100 meters, unable to keep up with the imposed pace. Managing to hang on to third place he finished on the podium at Worlds for the first time in his career, having finished seventh at the 2019 World Championships.

In the decathlon, Canadian Pierce Lepage currently sits second overall after the first of two days of competition.

After having started the competition strong, reigning Olympic champion Damian Warner was forced to retire — being unable to complete the 800m due to a hamstring injury.

The World Athletics Championships wrap up Sunday evening with the women’s 4x400m relay as the final event. 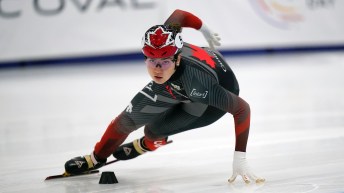