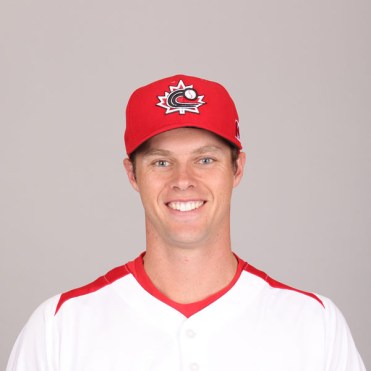 Andrew Albers currently plays for the Buffalo Bisons, the AAA affiliate of the Toronto Blue Jays, after signing with the Canadian MLB team as a free agent in 2015. He was drafted in the 10th round of the 2008 MLB Draft by the San Diego Padres. He made his MLB debut in 2013 with the Minnesota Twins, starting ten games and posting a 2-5 record with 25 strikeouts and 27 earned runs in 60 innings. Albers spent the 2014 season with the Hanwha Eagles of the Korean Baseball Organization. He was inducted to the Canadian Baseball Hall of Fame in 2012 along with the other members of the gold medal-winning team from the 2011 Pan Am Games. Albers posted 10 strikeouts in Guadalajara, third-most in the tournament. He has also represented Canada at the 2013 World Baseball Classic and the 2011 Baseball World Cup.

Kyle Lotzkar had a busy year with Team Canada in 2011, winning a gold medal at the Pan Am Games...