Carmelina Moscato made her Olympic debut at London 2012 where she started all six of Canada’s games, helping the team win bronze for Canada’s first Olympic medal in a traditional team summer sport since Berlin 1936.

Moscato made her debut with the national team in 2002. She was a tournament all-star at the 2002 FIFA U20 Women’s World Cup as Canada won silver on home soil. Moscato went on to make three appearances at the FIFA Women’s World Cup, helping Canada finish fourth in 2003 and advance to the quarterfinals at home in 2015.

Moscato made 94 international appearances for Canada before she retired in 2015. Her club career saw her win the USL W-League title with the Vancouver Whitecaps in 2004 and the Australia W-League Premiership title with the Sydney Wanderers in 2015. In her time at Penn State University, where she earned a degree in Communications, she made two appearances in the NCAA Final Four while winning four Big Ten titles. In 2019, she served as an analyst for the Canadian broadcast of the FIFA Women’s World Cup. 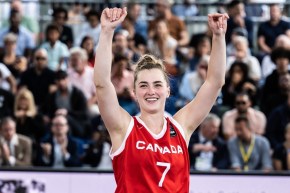 Melanie Booth made her Olympic debut at London 2012 and captured bronze with the women’s national team. The defender had…