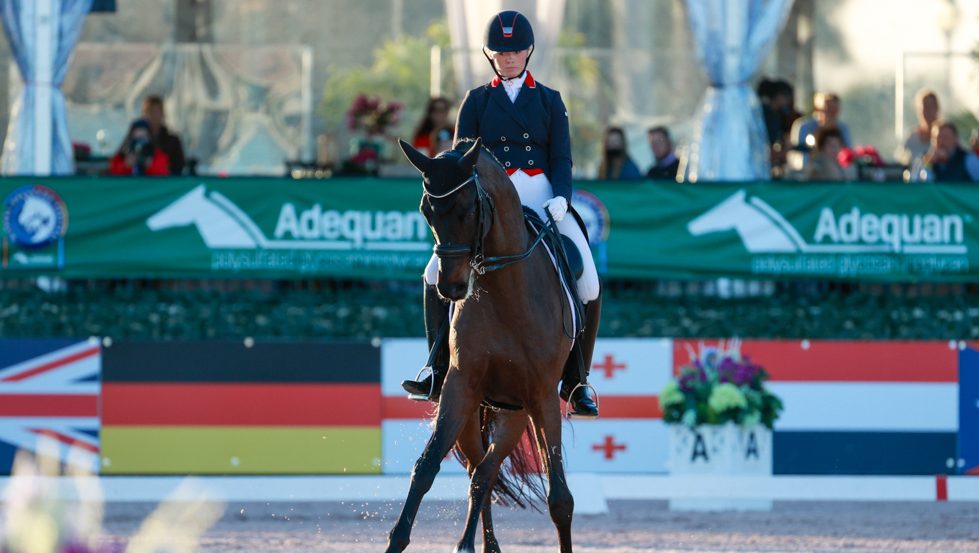 Lindsay Kellock made her Canadian Dressage Team debut at the young age of 22, representing the maple leaf in the 2013 CDIO 3* FEI Nations Cup in Wellington, Florida, riding Hunter Douglas Rhapsody. After taking a short break from competition, she returned to the ring stronger than ever. Partnered with Royal Prinz, Kellock earned a string of top-three finishes at prestigious competitions including wins at the 2016 CDI 1* in Tryon, North Carolina, the 2016 CDI 3* in Saugerties, New York and the 2017 CDI 1* at the Adequan Global Dressage Festival (AGDF) in Wellington, Florida.

Kellock returned for a brief but powerful run with Floratina in 2019, during which the combination scored above 70% on every single test performed at the FEI level. Their consistency bolstered Team Canada to a silver medal finish at the Wellington FEI CDIO 3* Nations Cup. Next, Kellock and Floratina tackled the Lima 2019 Pan American Games in Peru, bringing home the team gold medal to qualify a Canadian dressage team for Tokyo 2020 and earning a notable top-10 finish as individuals.

Kellock’s current top mount is Sebastien. They have made their way to the winner’s circle at numerous events, including the 2019 Saugerties CDI-W, 2019 Dressage at Devon CDIO-W in Devon, Pennsylvania, the 2021 AGDF CDI 3* and 2021 World Equestrian Center Dressage III CDI 3* in Ocala, Florida. Most recently, the combination posted an impressive personal best of 79.025% at the Tryon Spring Dressage 1 CDI 4* in Mill Spring, North Carolina.

A Little More About Lindsay

Getting into the Sport: Started riding at age 6… Mother was a dressage rider and managed Sunnybrook Stables in Toronto with aunt, Sue Bundy… Outside Interests: Used to ski race before dressage… Enjoys running… Odds and Ends: Traveled to Beijing 2008 as groom for Jacqueline Brooks and Gran Gesto… Worked as assistant trainer and barn manager for Ashley Holzer for seven years…

Jill Irving has gone from a national level hunter and jumper competitor to one of Canada’s top dressage talents.

In 2007, Tina Irwin broke onto the FEI competition circuit with a splash on Amicelli, and the horse-and-rider combination made…