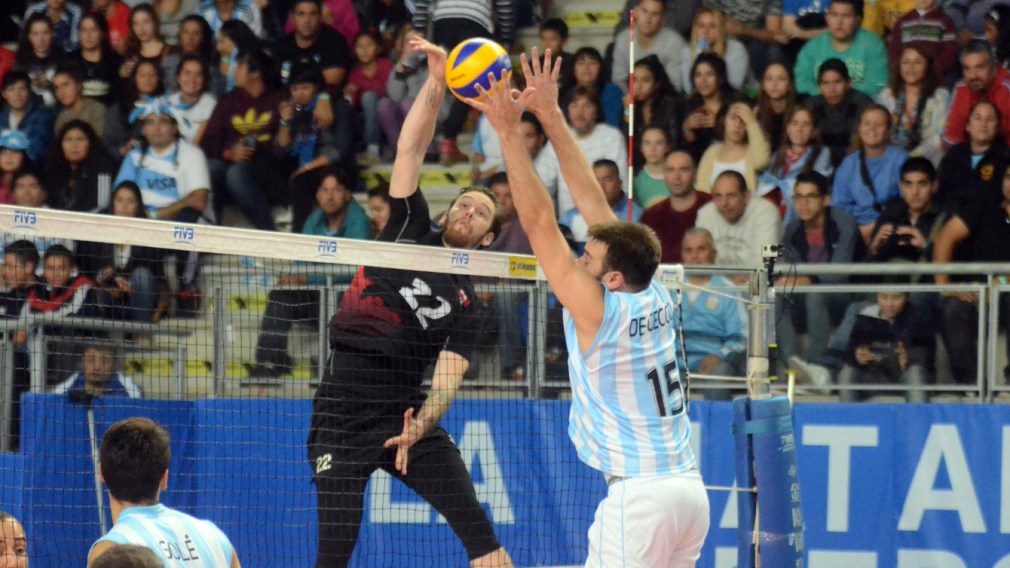 Canada finished its pool play in the FIVB World League this weekend in Argentina, but must wait to learn if it will advance to Group 2 finals.

Desperate to take maximum points in Pool C, Argentina won both matches, first Friday (3-1), then Saturday (3-2). That gave the South American team five of six points from the weekend, while Canada took just one for losing in five sets on Saturday. 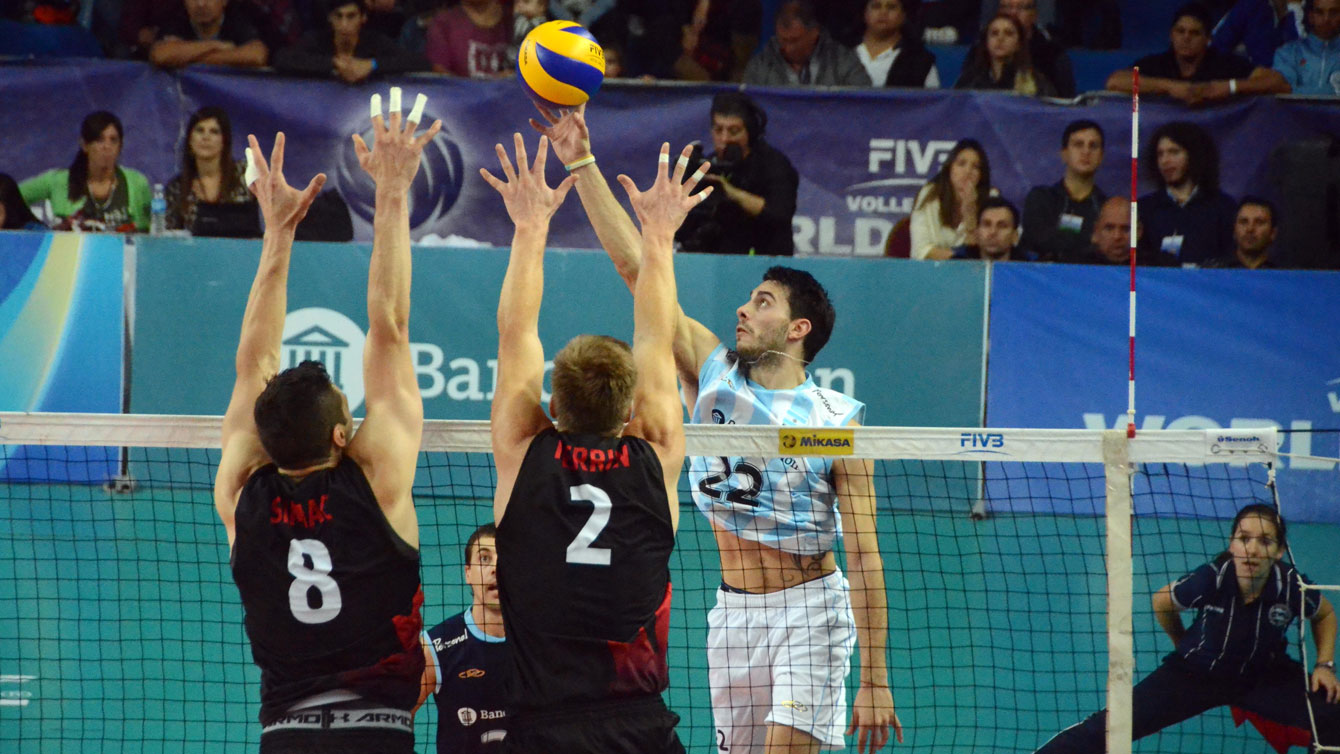 Adam Simac and Gord Perrin get up to block an Argentina hit on Saturday in FIVB World League, June 27, 2015 (Photo: FIVB).

Canadian players conceded they weren’t at their best on Friday night, with Canada captain Fred Winters admitting “everybody knows they can do better, so it should be easy to improve.” On Saturday, a controversial call on match point for Canada could prove to have major implications on the season.

Canada was up two sets to one in the fourth on Saturday leading 24-23, but what looked to be the winning point from Justin Duff was called out and soon, Argentina prevailed 27-25, before winning the fifth set to take the match along with two of three points on offer. 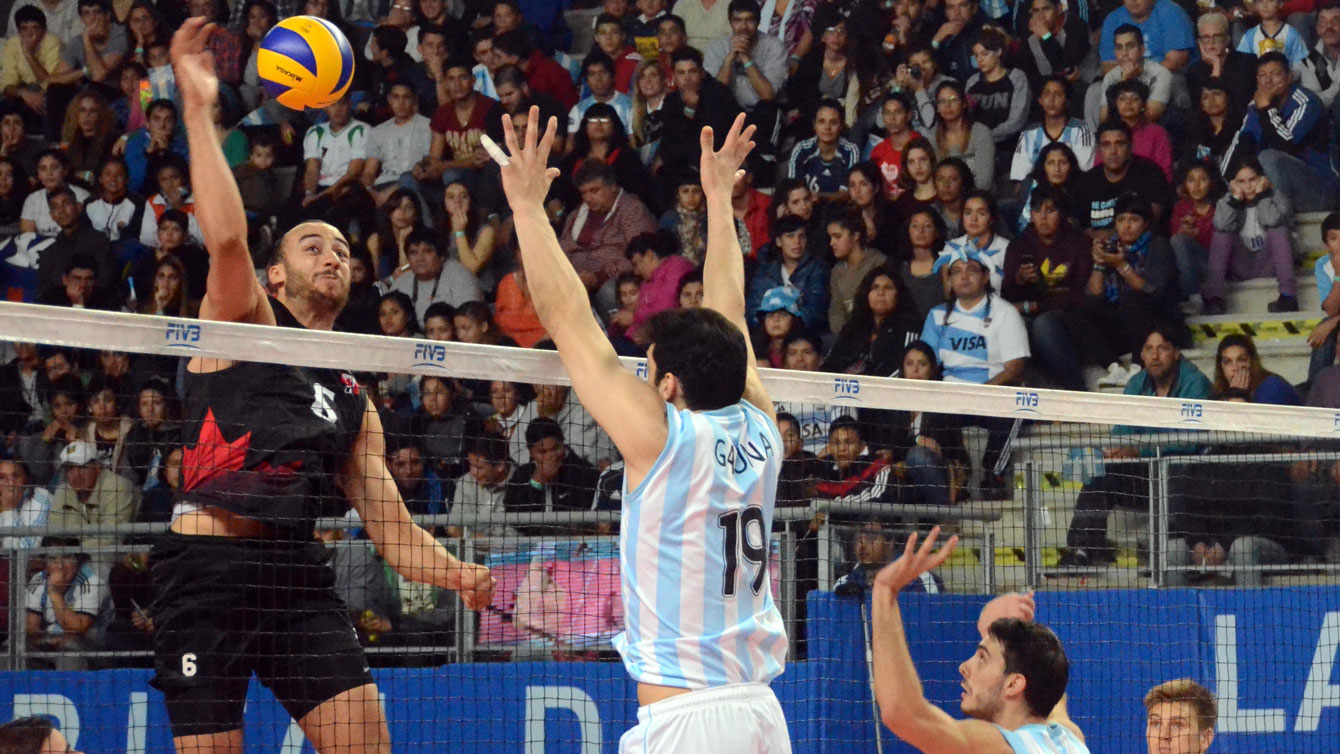 Justin Duff goes up for a spike against Argentina in FIVB World League on June 27, 2015 (Photo: FIVB).

Had Canada won in four sets, it would’ve taken the full three points on Saturday and wrapped up Pool C. Now, with 23 points, it must wait for Argentina and Bulgaria – each with 18 points – to face each other next weekend. If Argentina gets all six points from the two ties in Bulgaria, it will advance to the finals at Canada’s expense.

Volleyball tickets for Pan Am Games in Toronto

Group 2 finals will give teams a chance to advance to the elite Group 1 of the World League next season. Cuba has finished last in Pool C with seven points and is not eligible for the finals.

Controversial call helps condemn Canada to wait in World League
Ana Padurariu: Facing the never-ending challenges of 2020
Team Canada Athletes Train at Home
20 Team Canada Olympic Moments of Pride
What is the difference between racquetball and squash?
Shuttlecock and balls: The fastest moving objects in sport