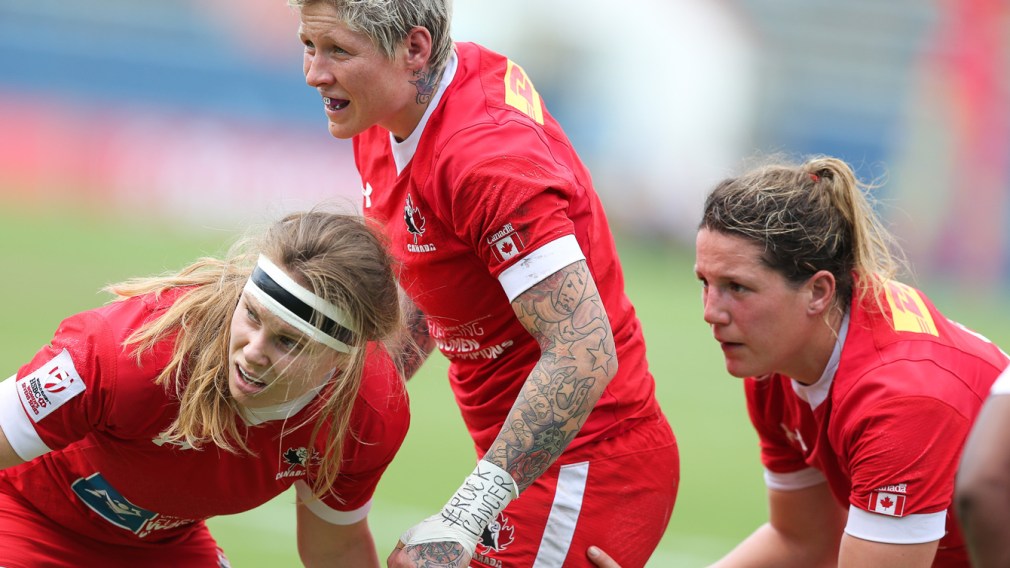 Although they fell to Australia in the Cup final this weekend in Brazil, the women made history after beating one of their toughest competitors, New Zealand, for the first time ever. They rounded out the tournament finishing second overall and moving up in the World Rugby series rankings. 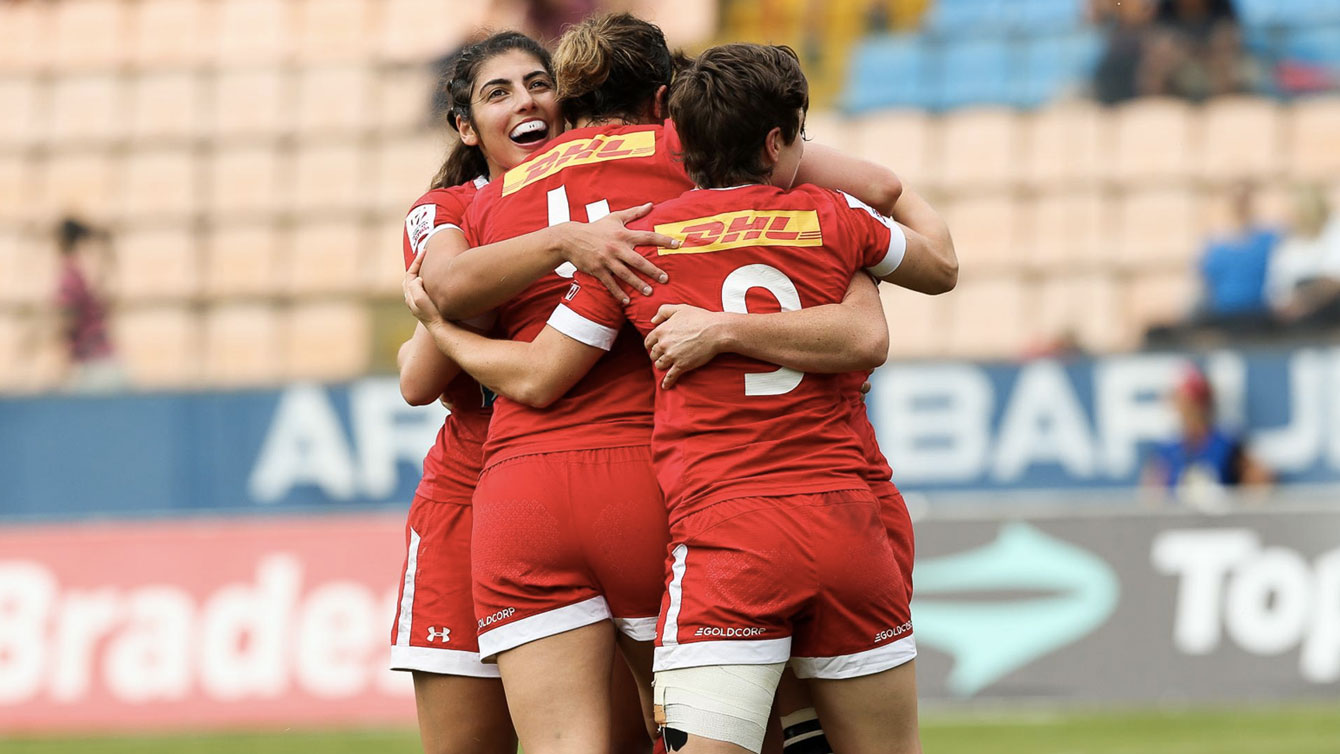 Australia leads the series with 40 points having won both Dubai and Sao Paulo tournaments. Canada is tied with New Zealand at 28 points, leaping up to tie the Kiwis after finishing sixth in Dubai.

Here is how the latest tournament went for the Rio 2016 bound Canadians:

Bianca Farella kicked this match into high gear after receiving a pass from Ghislaine Landry and running it the entire length of the field to score Canada’s first try against France. Kelly Russell added to the scoreboard by completing the conversion for 7-0. Britt Benn and Jen Kish scored a try each in the second half and Landry secured one last conversion before the time was up to shut out France 19-0.

Canadian women followed the France victory by beating New Zealand for the first time ever in rugby sevens history. It was a tight match that saw New Zealand score first, but missing their first conversion opportunity. The second try of the match was scored by Canada’s Landry who followed it up with two conversion points for a 7-5 lead. Kayla Moleschi scored the next one and brought the Canadian total to 12 points, followed by a Landry conversion for a 14-5 lead. In the second half Kish scored what World Rugby is calling a “wonder try”. The match ended with New Zealand scoring a try to bring the score to 19-10.

RELATED: Get to know Jen Kish and Ashley Steacy 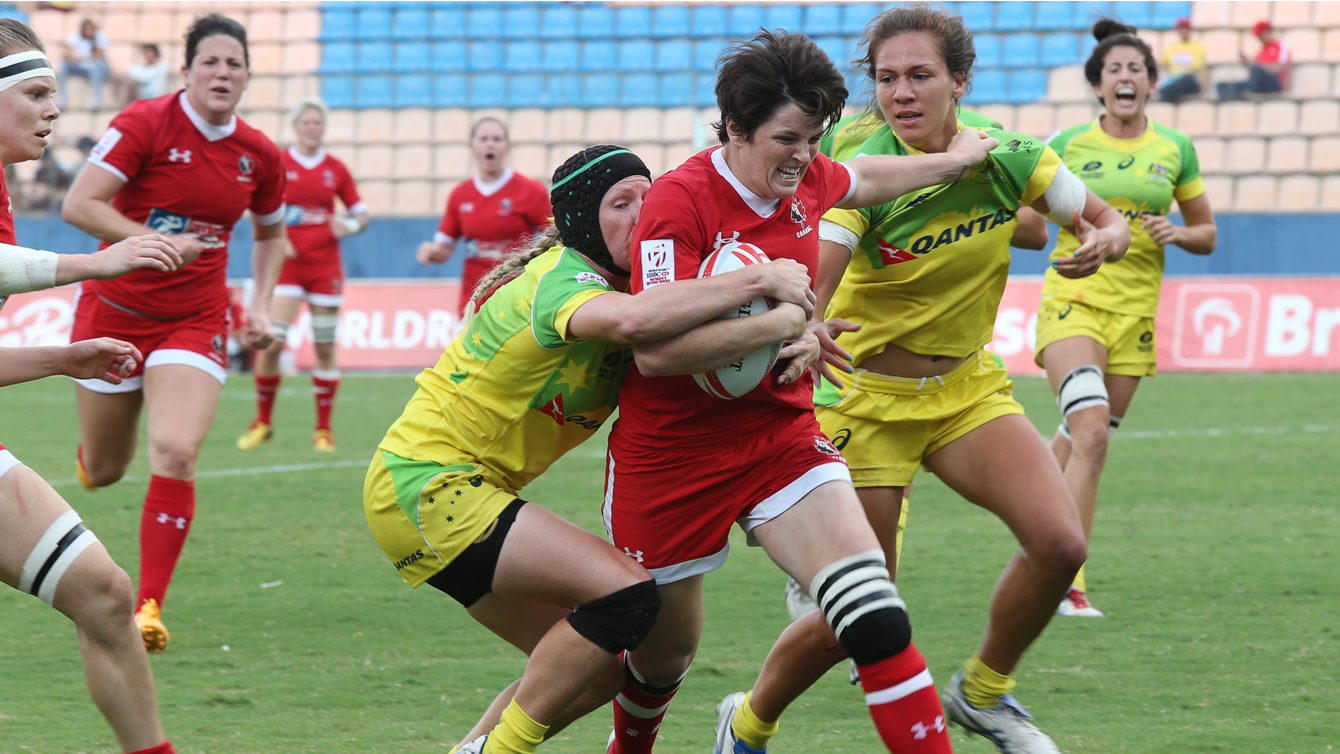 Conditions changed just before the cup final as the weather shifted from sunshine to pouring rain, forcing both teams to adapt. Australia struck first scoring a try and conversion three minutes in and went on to shut out the Canadians scoring four more tries and a conversion. 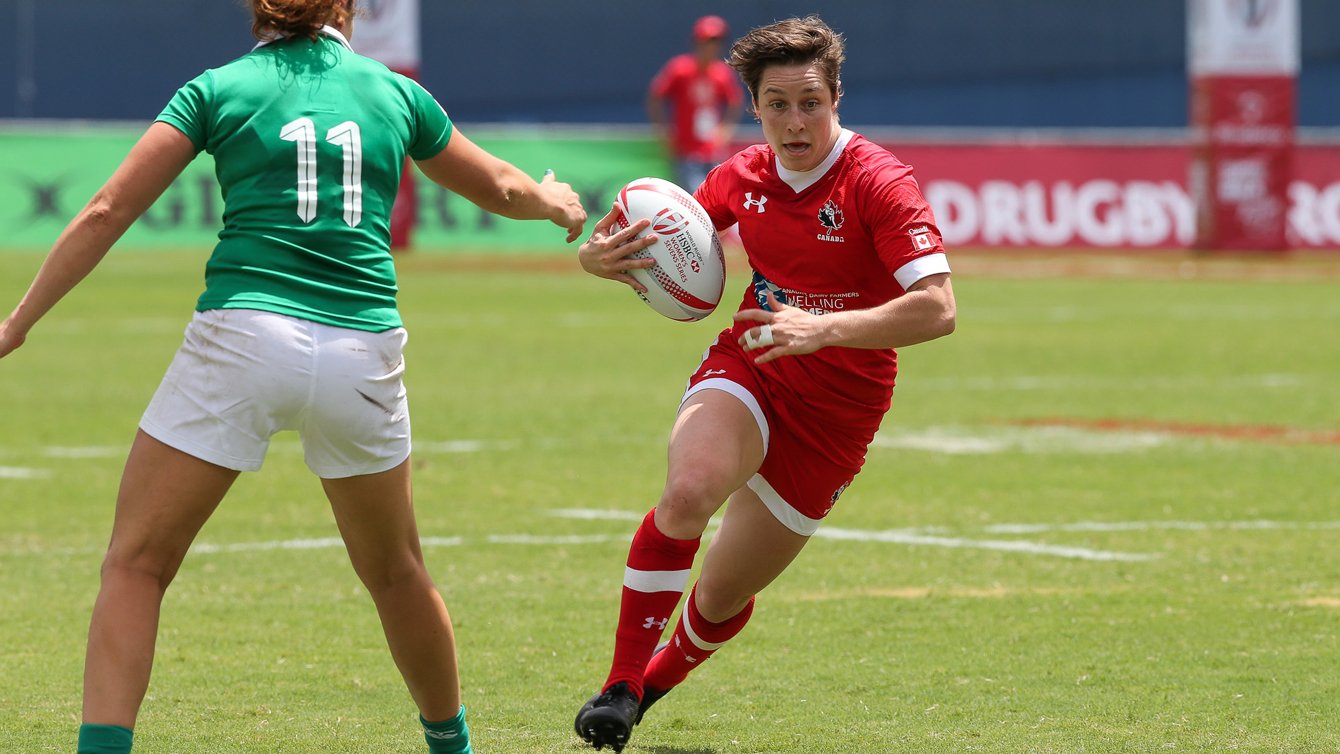 Karen Paquin opened the scoring for Canada in their first match of the series about 1 minute and 20 seconds in. Landry followed her scoring lead shortly after, sandwiching a try, a conversion, and another try in before the half way whistle. Russell got the conversion off of Landry’s second try. Benn scored the final try in the second half with Russell kicking between the uprights to bring the score to 26-0. Ireland scored a try and a conversion before the final whistle to end the match at 26-7. 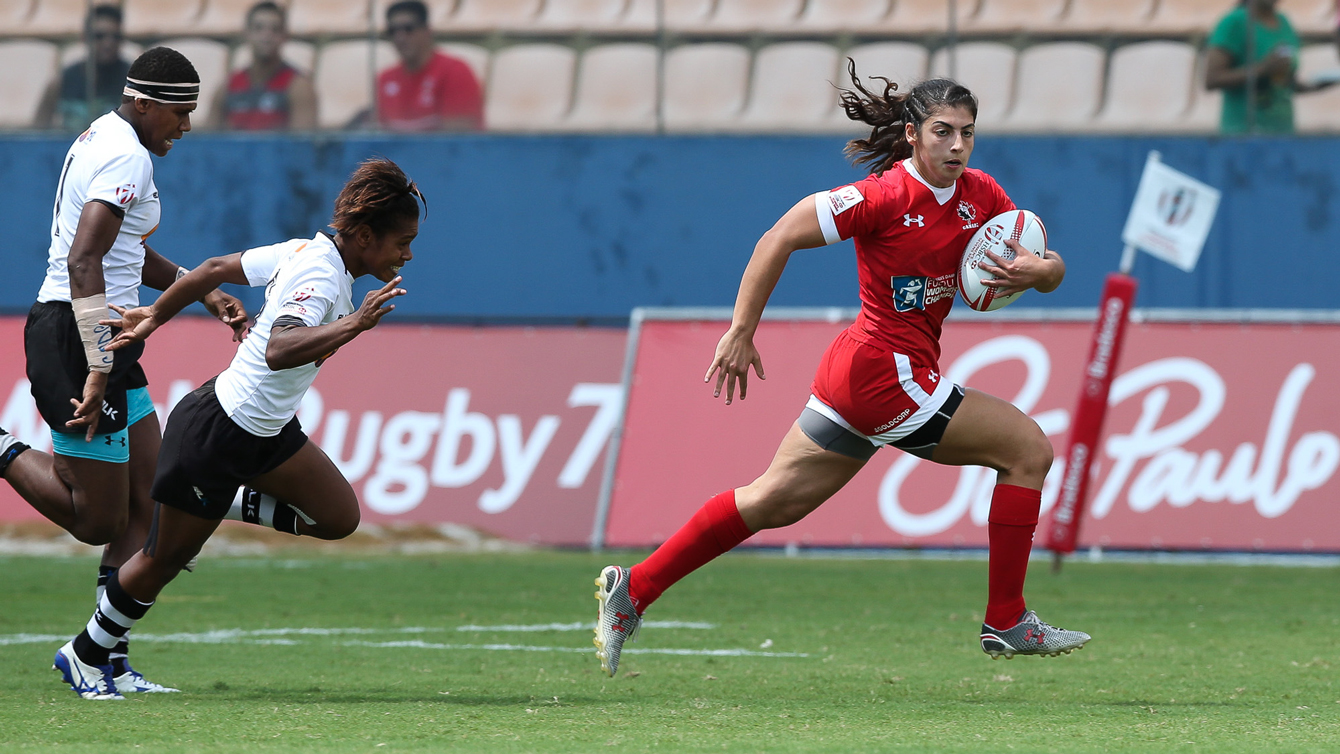 In their second pool match Bianca Farella swooped in to pick up a missed pass and carried the ball across the try line for a successful 5 point return, Landry followed it up with a conversion. Fiji evened up the match before half with another try and conversion combo. The second half was full of action from Benn (1 try), Landry (2 tries), and a conversion from Russell. 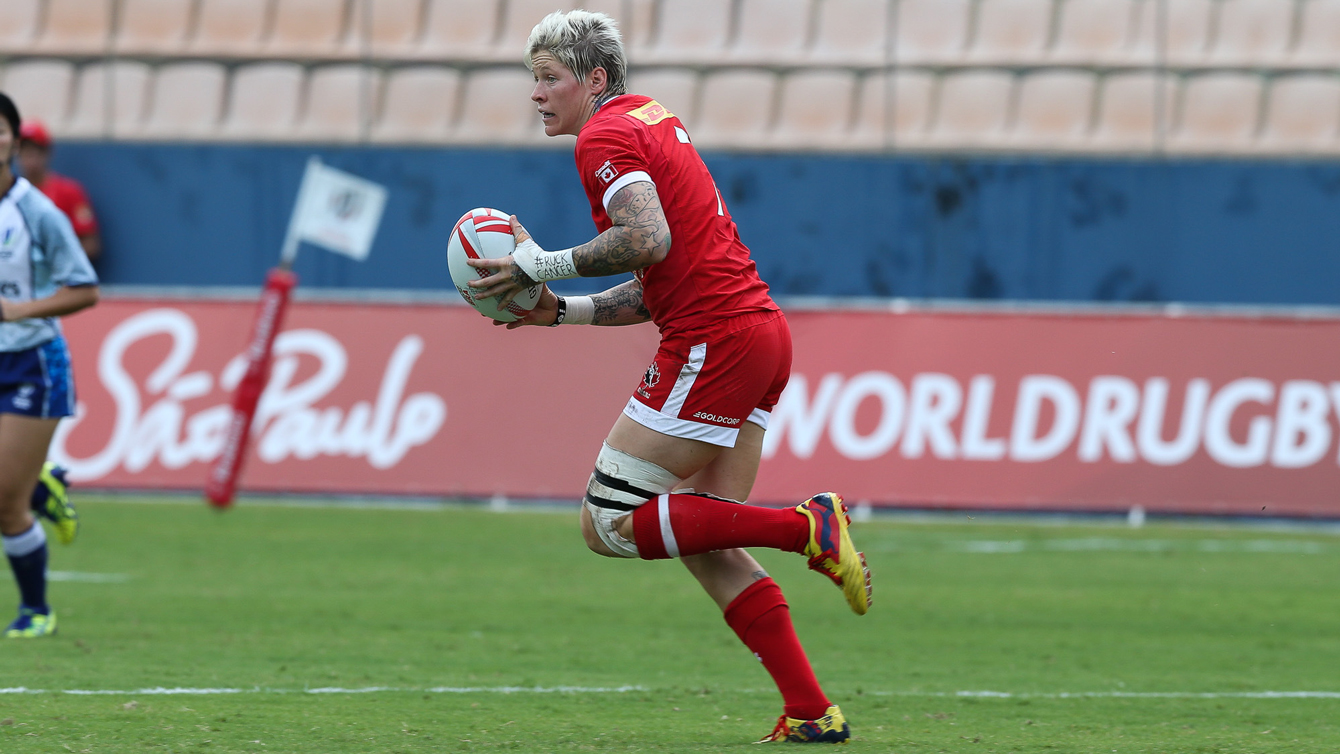 Australia got the momentum moving in this match scoring within the first minute of play and following that up with another try not long after Kish brought the momentum back to the Canadians as she powered through the Australian team to score the first Canadian points. Russell got the second try and Landry got conversions on both. Unfortunately for Canada, Australia dominated the pitch for the last seven minutes of play, scoring three more tries and two more conversions.

No doubt the squad has walked away from São Paulo this weekend with more determination for Rio 2016 than ever. Be sure to follow Canada on their road to Rio as the women’s sevens series touches down in Atlanta April 7-8 and then at home in Langford, BC April 16-17.

Sevens success continues with second place in Sao Paulo
What is the difference between racquetball and squash?
Canada’s National Sports Organizations plan for safe return
Shuttlecock and balls: The fastest moving objects in sport
Brandon McBride: Keeping His Head on a Swivel
Adventure, culture and food: 9 things Peru is famous for