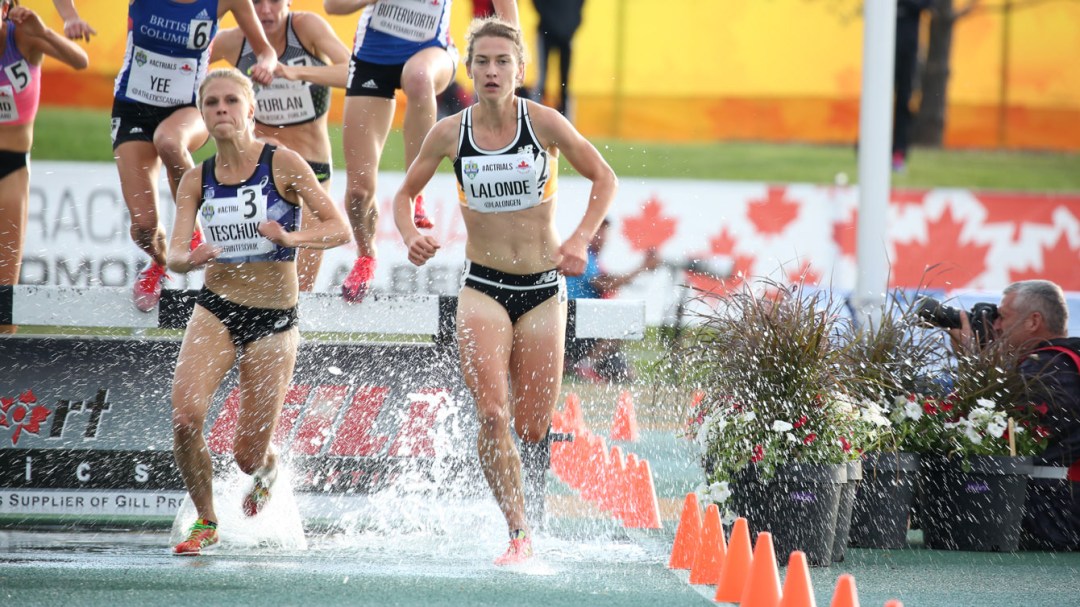 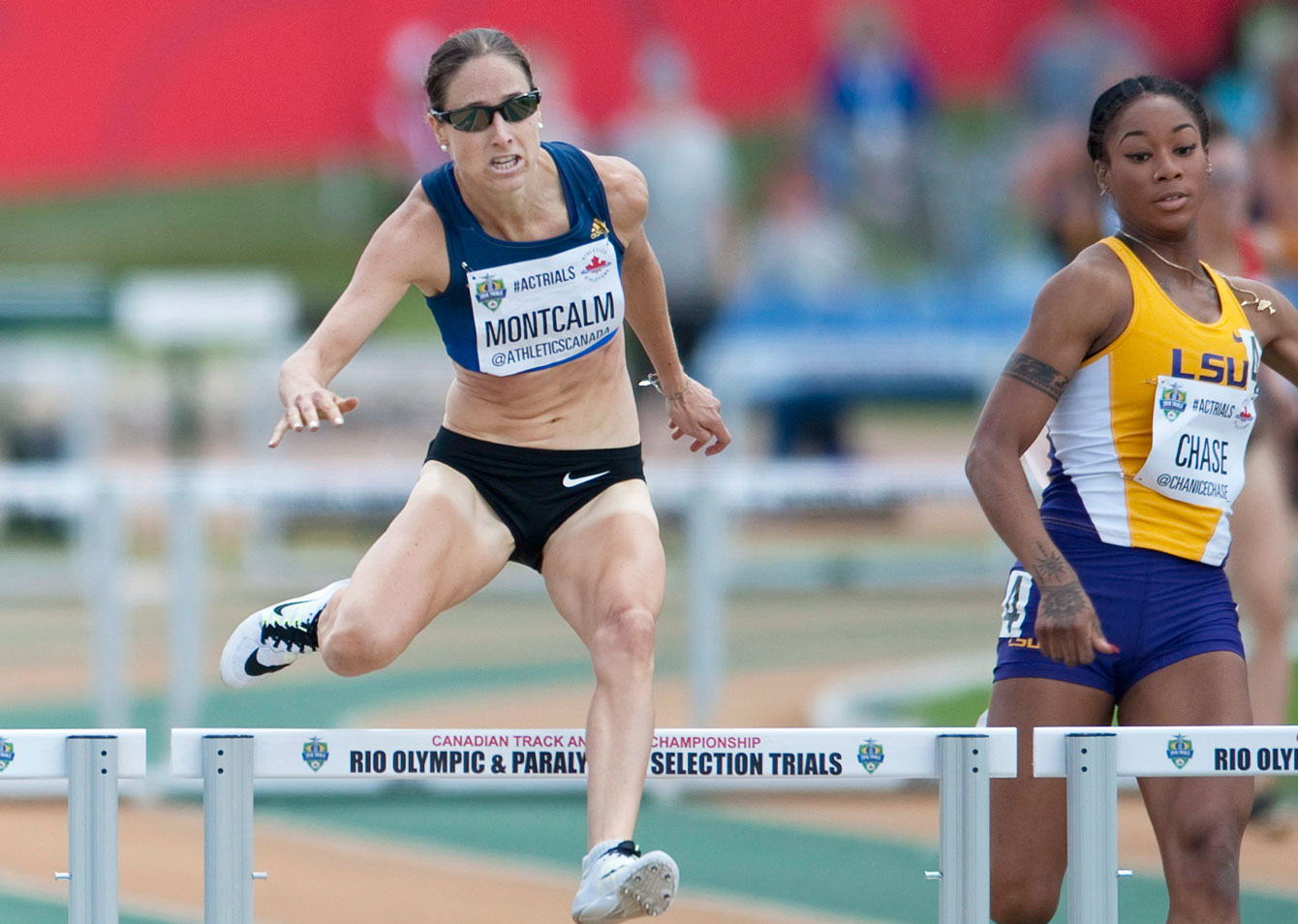 After coming agonizingly close to achieving Olympic standard on Thursday, Noelle Montcalm not only cleared that barrier a day later, she won the women’s 400-metre hurdles national title outright.

Running in 55.83 seconds – well under the 56.20 required to punch a ticket to Rio – Montcalm claimed a national title after missing out on the standard by 0.02 the previous day. 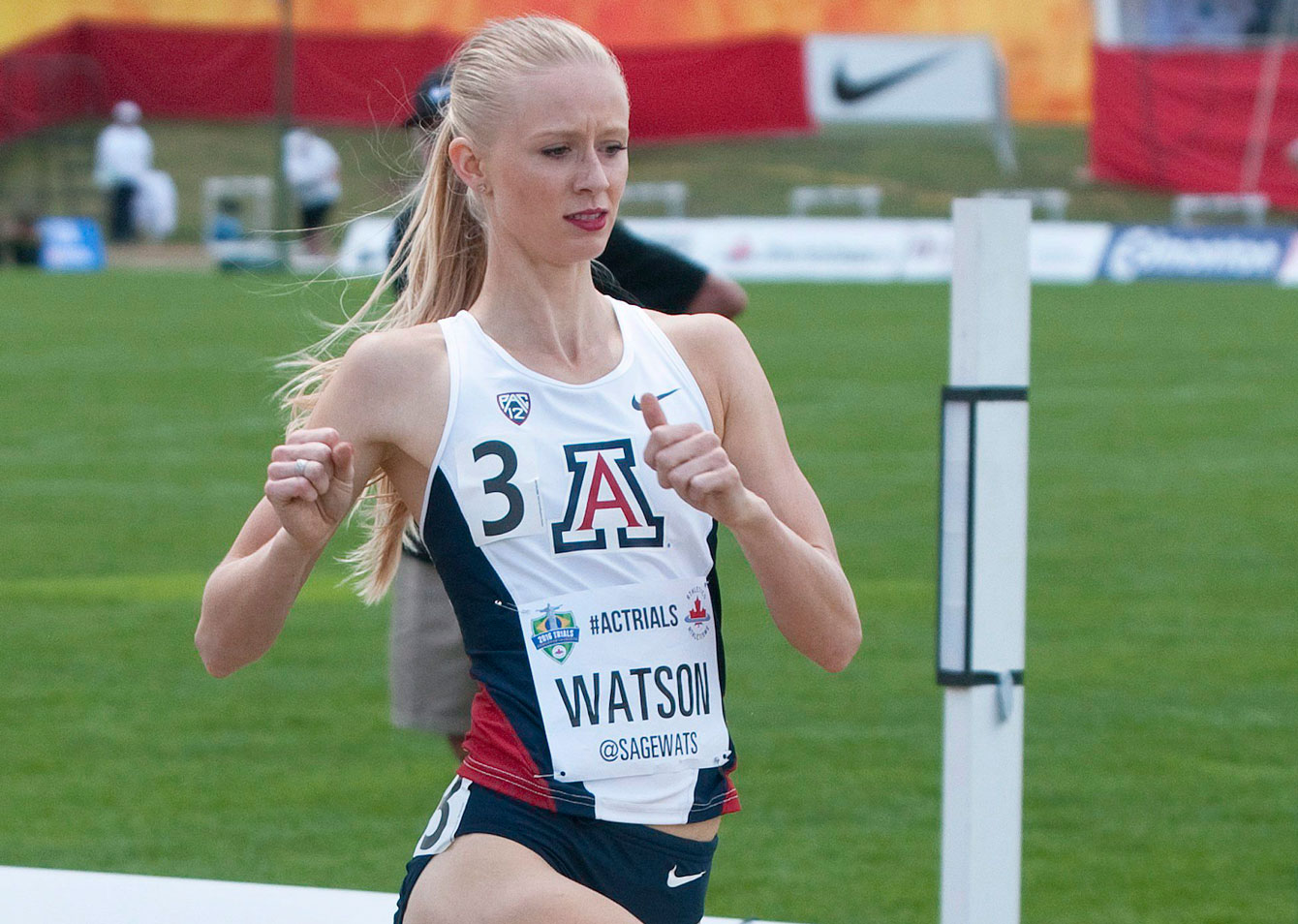 Sage Watson as she finishes second at the Olympic trials on July 8, 2016.

Montcalm also beat the race favourite, Sage Watson, who has the fastest time run by a Canadian in the discipline this season at 54.82. On Friday, Watson clocked 55.88 and Chanice Chase was third in 56.06.

Per Athletics Canada rules, Montcalm and Watson will both head to Rio. Meanwhile, a case can be made for Chase, and she could be nominated to Team Canada provided the Athletics Canada’s national team committee decides she has the “competitive readiness” to warrant an Olympic inclusion. 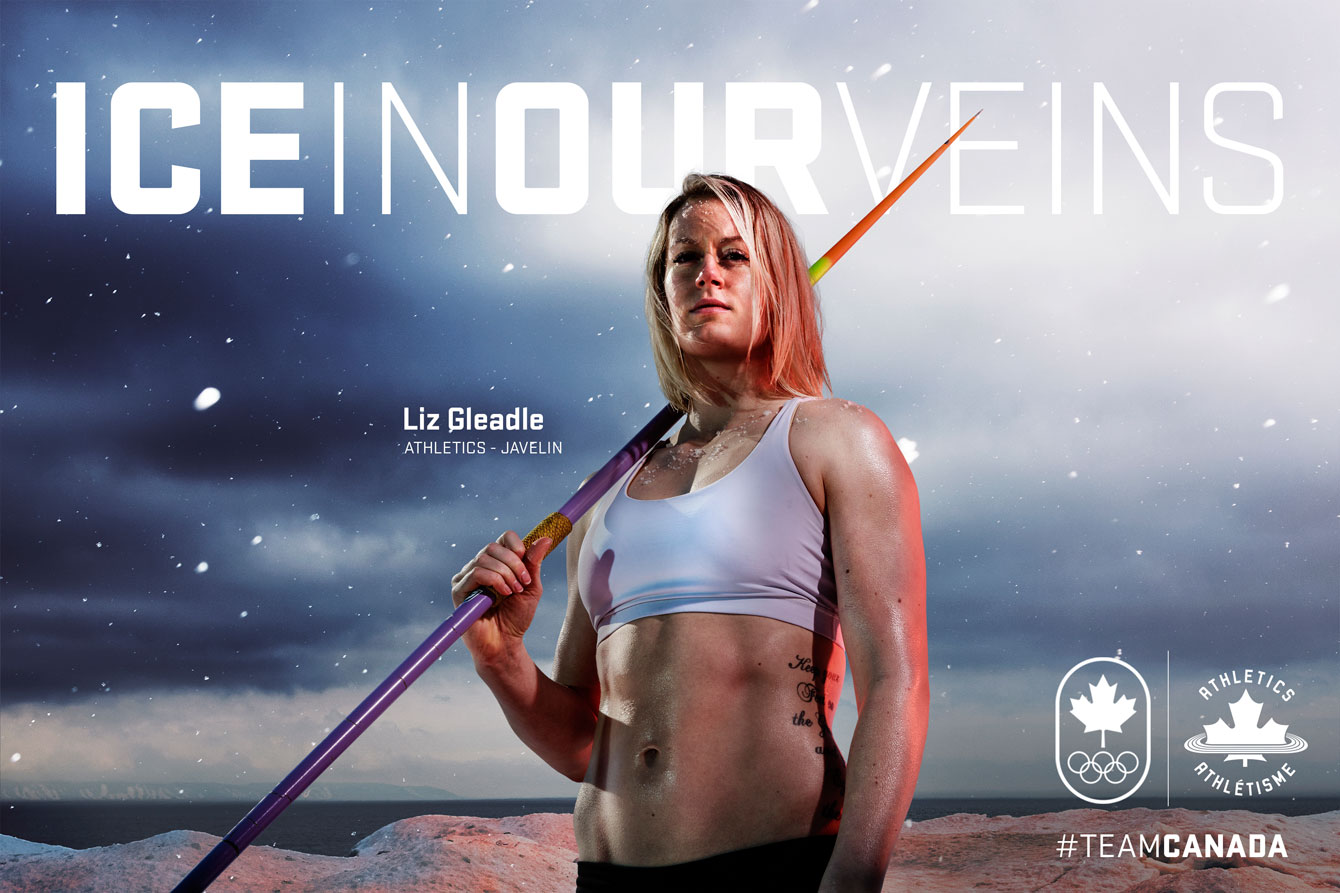 Liz Gleadle’s Ice in our Veins poster for Rio 2016.

Canadian record holder Liz Gleadle will be heading to her second Olympic Games. The London 2012 thrower launched for 59.36 metres in soggy Edmonton conditions following thunderstorms on Friday. Nonetheless, having already achieved the standard, Gleadle simply needed a top-two finish for an Olympic spot. 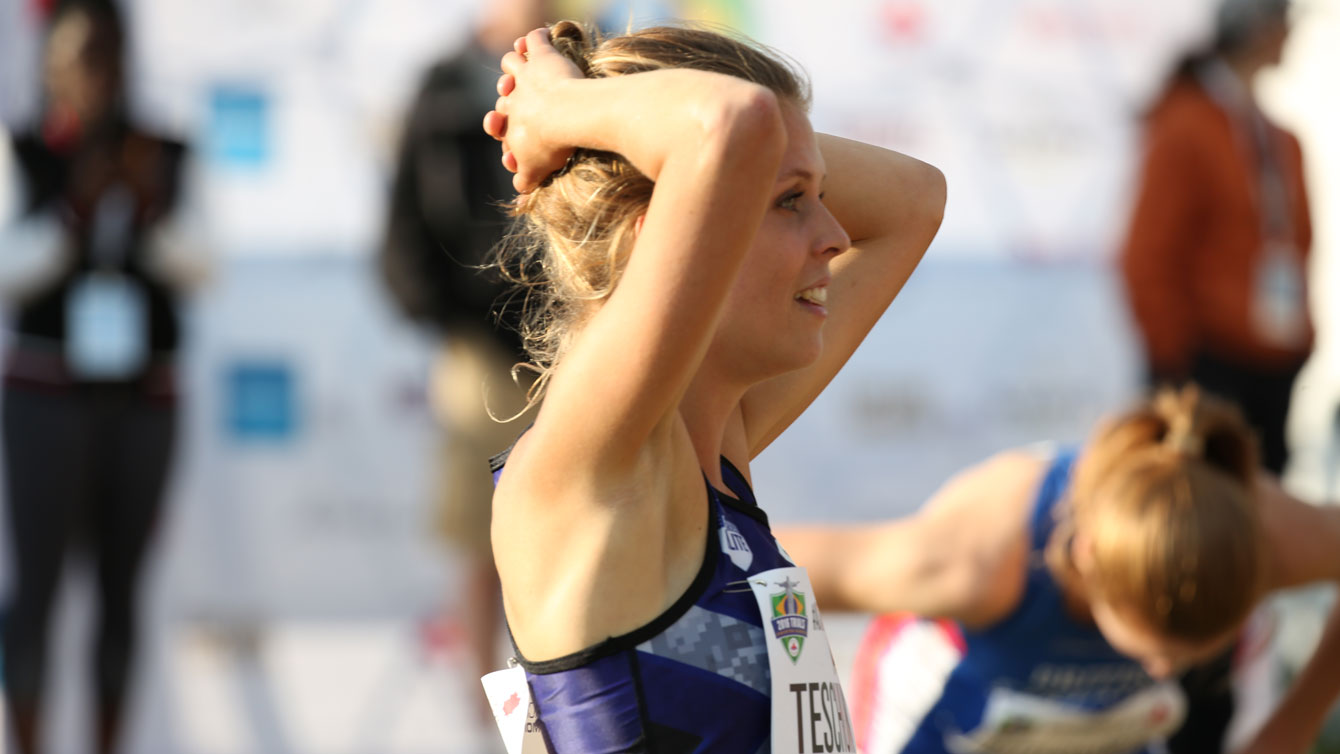 A relieved Erin Teschuk after winning women’s steeplechase at Olympic trials on July 8, 2016.

With all three runners having met the Olympic standard prior to the race, Teschuk and Bernard should expect to receive their nomination call on Monday, while Lalonde – who had the fastest seed time heading into the event – will be a national team committee decision. 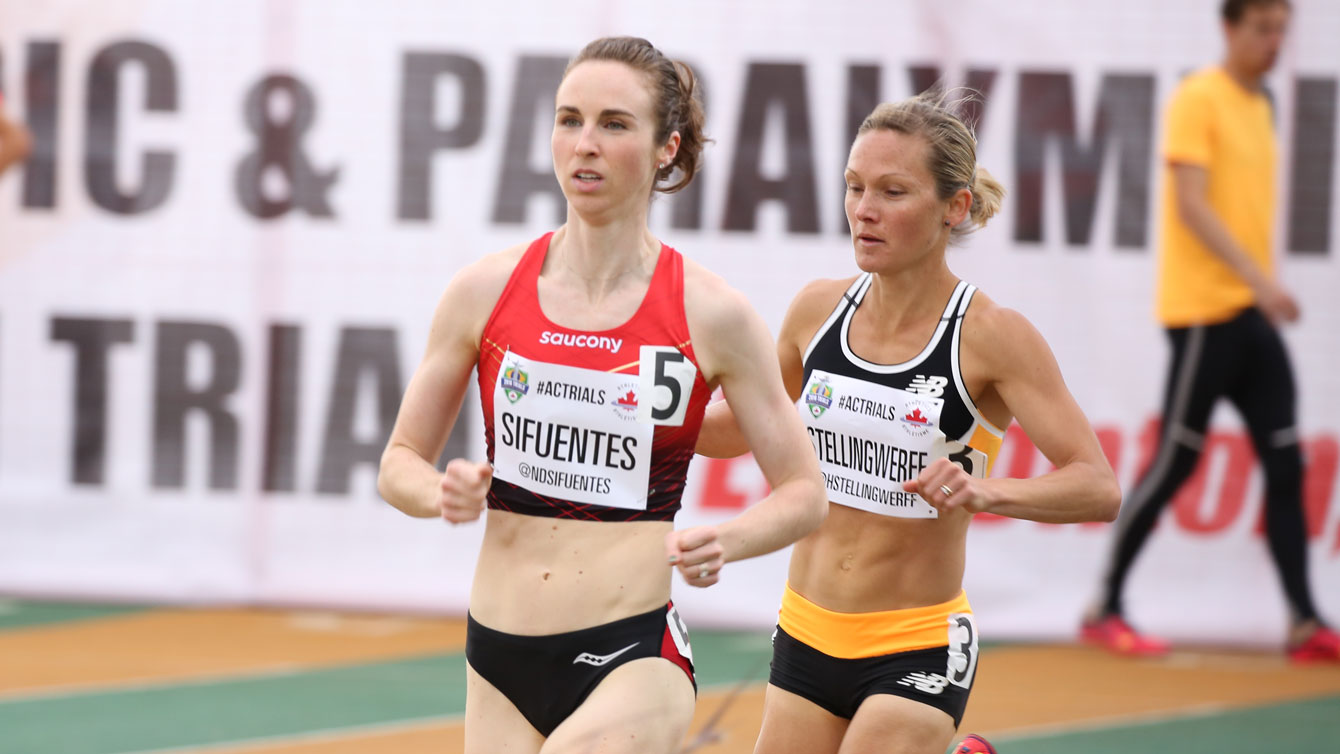 Nicole Sifuentes and Hilary Stellingwerff in the 1500m semifinals at Olympic trials on July 8, 2016.

Nicole Sifuentes (4:20.40), Hilary Stellingwerff (4:21.94) and Gabriela Stafford (4:22.33) were the top three leaders after the semifinals, all comfortably advancing to Saturday final. Stellingwerff is an Olympian, made her debut at the Games at London 2012.

Missing from the semifinals was Olympian Sheila Reid, who had the fastest seed time heading into trials. 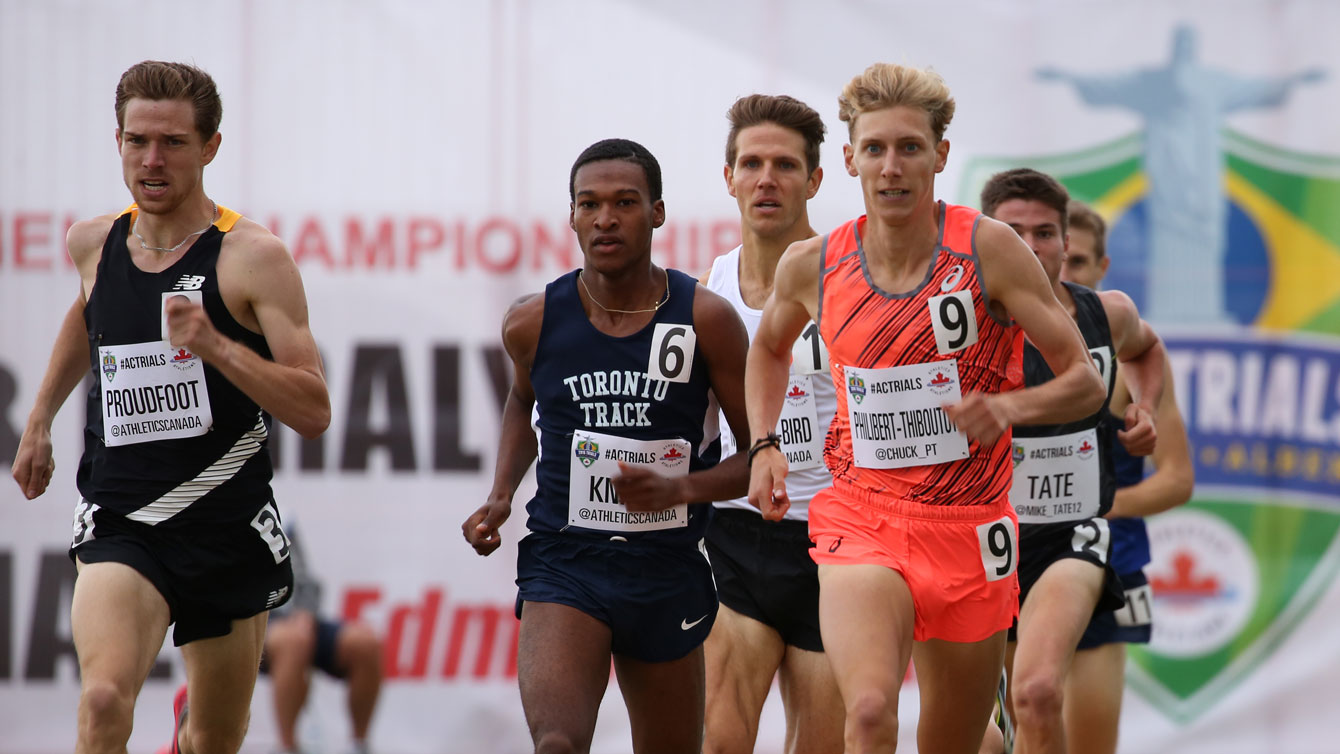 Charles Philibert -Thiboutot (number nine) in the men’s 1500m semifinals on July 8, 2016 at the Olympic trials.

Charles Philibert-Thiboutot led the way with a run of 3:48.31 heading into Saturday’s final.

Philibert-Thiboutot and Brannen are the only runners to have met the demanding 3:36.00 standard to qualify for Rio 2016. Of the other runners closest to that barrier, Thomas Riva, has also qualified for the final. Riva’s seed time heading into trials is 3:37.34. Ross Proudfoot and Justyn Knight are the other two sub-3:40 runners in the field. 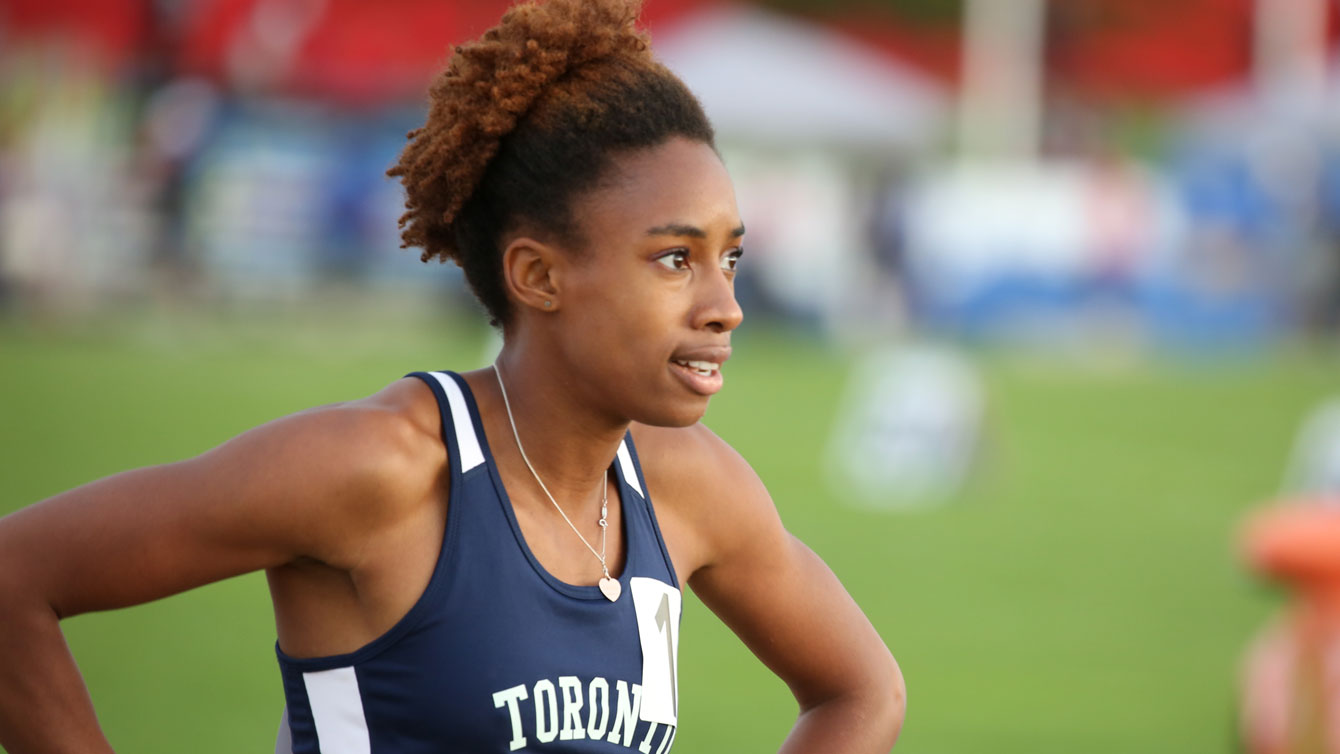 Micha Powell’s reaction after her 400m semifinal race at Olympic trials on July 8, 2016.

In a semifinal of upsets, two of four runners with Olympic standards will miss the final. Audrey Jean-Baptiste and Aiyanna-Brigit Stiverne had the ninth and 10th fastest times, missing the top eight for Saturday’s final.

The other two runners who have made the Olympic benchmark – Carline Muir and Micha Powell – just made the cut finishing seventh and eighth respectively. Muir represented Canada at Beijing 2008.

Kendra Clarke (52.97) posted the fastest time of the semifinals.