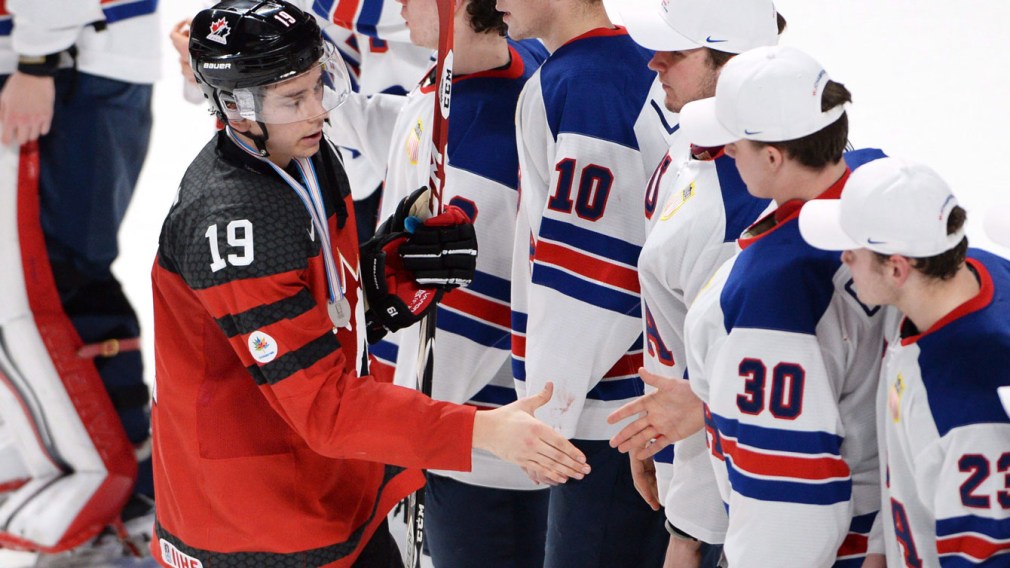 Erasing a pair of two goal deficits, the United States used the shootout to beat Canada and win its fourth gold medal at the IIHF World Junior Championship.

In another classic Canada-USA matchup, overtime solved nothing at 2017 World Juniors and USA took the best-of-five shootout 1-0 to win the game 5-4 at the Bell Centre in Montreal, leaving the largely home crowd heartbroken. It was also USA’s second win of the tournament against Canada, following a 3-1 group stage victory on New Year’s Eve. The Americans finished the tournament winning all seven of its games.

The game however, started with Canada firmly ahead. A fast start with a couple of shots by the speedy Americans was quickly sedated by Canada thanks in large part to a pair of defencemen from Quebec.

At 4:58 of the opening period Thomas Chabot was the first to light the lamp. The defenceman dumped an American player in his own zone, skated up the ice to join the rush led by Mathieu Joseph and Mathew Barzal. The latter “Mat” picked out Chabot streaking toward the net and it was 1-0 Canada on the country’s first shot of the game. It was Chabot’s fourth goal and ninth point of the tournament, getting on the scoresheet during every Canada game of the 2017 World Juniors.

Failing to clear the puck form its zone just over four minutes later, USA conceded its second goal when Jeremy Lauzon pounced on a loose puck and blasted it past Tyler Parsons in the American net for 2-0 to Canada. Lauzon’s second of the tournament was assisted by Mitchell Stephens, who picked up his fifth point at World Juniors, all of them coming in the three knockout games.

Canadian goaltender Carter Hart gave up his first goal since relieving Connor Ingram early in the semifinal against Sweden when Charlie McAvoy wired one past him 3:04 into second period to cut Canada’s lead in half at 2-1. Canadian forwards were caught on a line change and McAvoy made the most of his chance with Jordan Greenway setting up the goal. For Greenway, it was his fourth point in two games against Canada, after featuring in all three goals in the group game victory for USA on New Year’s Eve.

The US found an equalizer a little over six minutes later when Kieffer Bellows deflected a shot from Adam Fox at the blue line past Hart to make it a 2-2 game. Hart was effectively screened on the play and the Americans, having just won a faceoff in the Canadian zone, maintained possession and leveled the game.

Canada narrowly outshot USA 21-19 through two periods while struggling on the power play through 60 minutes, unable to score on its first three attempts.

The man advantage drought ended early in the third when Nicolas Roy rifled a shot past Parsons over his blocker hitting the roof of the net for a 3-2 lead for Canada at 1:52 of the final regulation period. A tripping penalty to Bellows on a knee-on-knee hit to Joseph set up Canada on its fourth power play and Roy converted with his third of World Juniors after taking a pass from Jake Bean.

Having recovered from his collision with Bellows, Joseph returned to the ice in a triumphant fashion, parting two turned around US defenders using his speed, before breaking in on Parsons to make it 4-2 for Canada only 73 seconds after Roy’s goal.

The Americans seemingly out of sorts, recovered just 39 seconds later with the game’s next shot, as Bellows redeemed himself for his penalty by burying a pass from McAvoy past Hart to cut Canada’s lead to one at 4-3.

The third period became even more wild two minutes and 23 seconds later when Colin White scored his seventh goal of the tournament for the Americans, tipping in a smartly delivered point shot from Fox – who picked up his third assist of the game – and the Americans erased a two-goal lead for the second time on the night, with the score at 4-4.

A delaying the game penalty to Casey Fitzgerald of the US gave Canada a chance to go ahead again, but a tap in for Pierre-Luc Dubois on a Barzal pass skipped by the yawning cage with the Canadian unable to redirect. Soon thereafter the game went to overtime and ultimately the shootout.

Neither team could seem to score in the best-of-five until Troy Terry beat Hart. Terry has been a shootout hero throughout the tournament, earlier helping USA to three goals in this format against Russia in the semifinals. Every other skater participating in the shootout was either stopped or missed the net.

In the bronze medal game, Russia beat Sweden in overtime 2-1 to take third place behind USA and Canada.