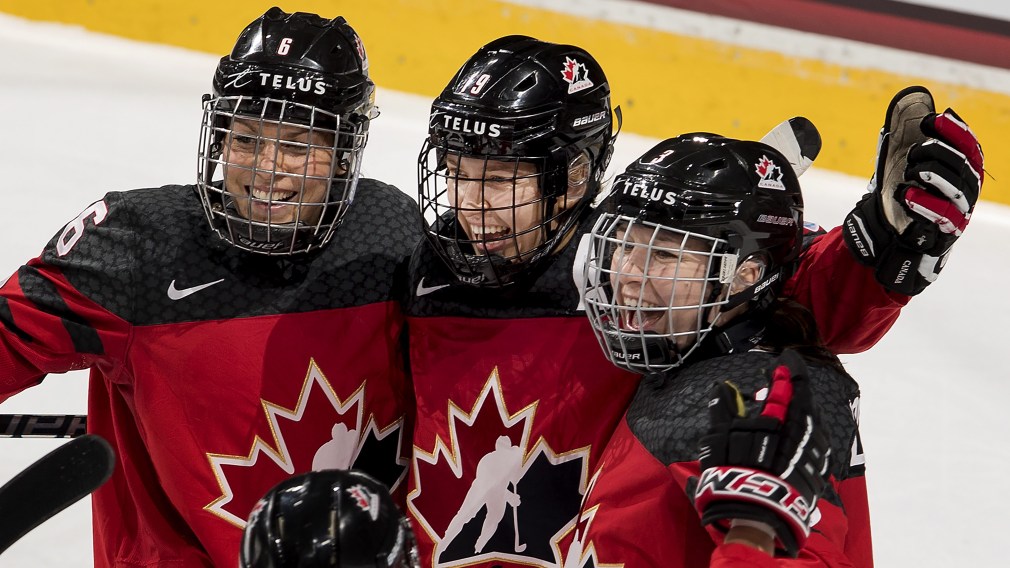 Whether in winter sports or summer sports, at home or halfway across the world, Canadian athletes put down some great performances this past weekend.

The ISU World Cup circuit came to Calgary and Canadian fans certainly had something to cheer about. Alex Boisvert-Lacroix captured his first career World Cup gold medal, winning the men’s 500m on Sunday. That followed a bronze medal on Saturday by the trio of Ivanie Blondin, Kali Christ and Isabelle Weidemann in the women’s team pursuit.

FINAL | @briannejenner scored 37 seconds into overtime to lift 🇨🇦 to a 2-1 win in Game 3 versus the United States. RECAP: https://t.co/4S48e5pTcJ #RedWhiteUnite pic.twitter.com/PaHvY5PI1Y

Canada’s National Women’s Team earned a 2-1 overtime win over the United States on Sunday evening in St. Paul, Minnesota, with Brianne Jenner scoring the game-winner. Canada had been down 1-0 with just over two minutes to play in the second when Marie-Philip Poulin tied it up. Shannon Szabados was back between the pipes, making 27 saves.  Team Canada now has a 2-1 series lead on Team USA with the next game between the two countries on December 5 in Winnipeg.

“I was definitely happy with how we played tonight, the energy shift was key for us. It’s going to be important for us to continue to bring that energy going forward to continue to be successful,” said head coach Laura Schuler.

How does he do it? 🤷‍♂️@markmcmorris takes top spot at 🇨🇳’s Banana Open Slopestyle event! 🍌

Mark McMorris made it two wins in a row in his comeback to competition, taking slopestyle gold at the Banana Open in China. McMorris stood atop the podium ahead of a pair of Norwegians, Stale Sandbech and Torgeir Bergrem. Darcy Sharpe and Michael Ciccarelli were also in the top 10, finishing sixth and eighth, respectively.

The UCI World Cup circuit brought the world’s elite track cyclists to the Milton velodrome for the first time. The home team captured four medals, highlighted by the gold in the women’s team pursuit by Ariane Bonhomme, Kinley Gibson, Annie Foreman-Mackey and Allison Beveridge after they caught New Zealand in the final. Kirsti Lay and Steph Roorda were also medallists after racing in an earlier round.

A New Canadian Record in Men’s Team Pursuit set on Canada’s Home Track! 3:58.359! It’s been a remarkable weekend so far for Team 🇨🇦! So much more to come! pic.twitter.com/LefZxlrFYq

The men’s team pursuit squad of Derek Gee, Adam Jamieson, Jay Lamoureux and Michael Foley, along with early-round racer Bayley Simpson, took the silver medal. Less than 30 minutes after her team pursuit triumph, Beveridge was back on her bike earning a silver medal in the omnium. Jasmin Duehring won silver of her own in the points race.

Arthur Margelidon claimed silver in the 73kg category at the Tokyo Grand Slam. It is his first career Grand Slam podium, following a Grand Prix silver he took in early July, and moves him up five spots in the world ranking to crack the top 10. It’s all part of a great comeback season for the judoka who missed competing at Rio 2016 after breaking his arm shortly before the Games.

Canadian Roundup: Success in all seasons of sport
Team Canada and Hudson’s Bay unveil Tokyo 2020 uniform kit
Wearing the maple leaf: Team Canada through the decades
What is the difference between racquetball and squash?
Shuttlecock and balls: The fastest moving objects in sport
Brandon McBride: Keeping His Head on a Swivel