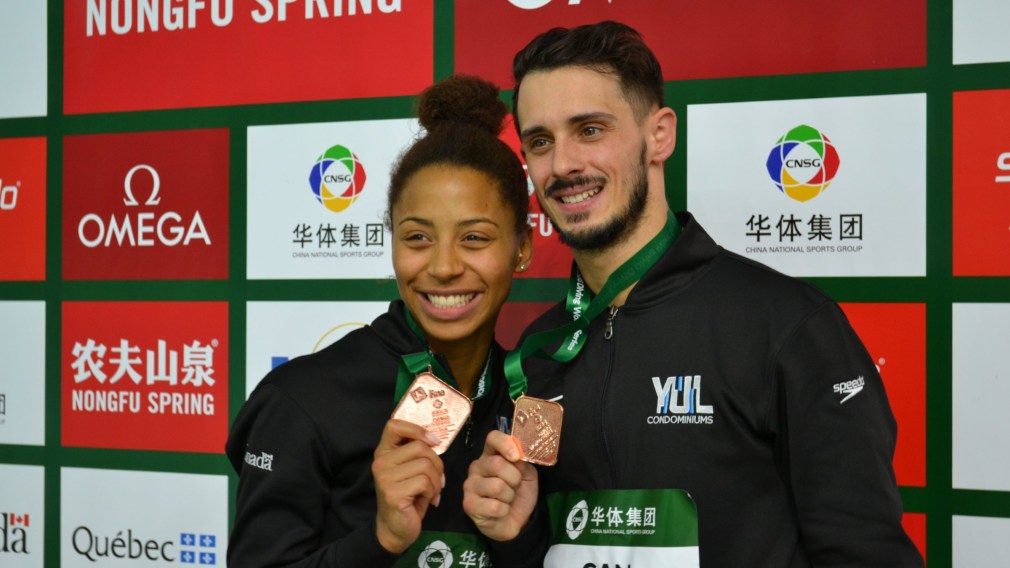 Jennifer Abel and François Imbeau-Dulac won bronze in the 3m mixed synchro event on Sunday to conclude the weekend at the World Series of Diving at the Olympic Park Sports Centre in Montreal.

In the very last event of the weekend, the Canadian pair were able to secure a spot on the podium with a score of 310.89. Gold went to China with a total score of 318.15, while Great Britain took the silver with 314.10 points.

Wrapping up the FINA/CNSG Diving World Series with a wonderful synchronization from the host nations mixed team Francois Imbeau-Dulac and Jennifer Abel. You can enjoy all the action from Montreal on 📺 https://t.co/bEozhdW5qV. #Diving #DWS19 🌏💦 pic.twitter.com/w4NrzKUKzH

This is the first medal for Imbeau-Dulac this weekend and the second medal for Abel. On Friday, Abel rose to a second place finish in the women’s 3m synchro alongside teammate Melissa Citrini-Beaulieu. This is also the third podium for Team Canada at this World Series of diving. Meaghan Benfeito and Caeli McKay won silver in the women’s 10m synchro event early on Friday.

After a difficult day of competition on Saturday, this final podium is good way to wrap-up the weekend for Team Canada’s divers.

Team Canada divers land on the podium in front of a home crowd
Where are They Now? Alexandre Despatie
What are the differences between baseball and softball?
Canada locks up men’s Olympic curling berth for Beijing 2022
Shuttlecock and balls: The fastest moving objects in sport
What is the difference between racquetball and squash?