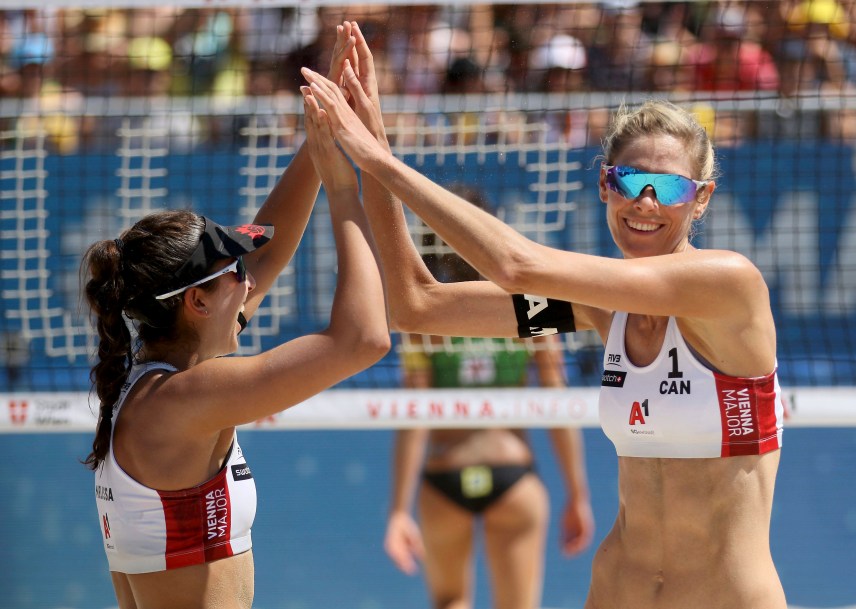 While a day at the beach is about enjoying the water and napping in the sun for most people, the sand is more of a playground – literally and figuratively – for beach volleyball players.

Discover more about the training of Canada’s beach volleyball athletes and gain some inspiration for your own action-packed days by the water!

Want to play in the sand? Reigning world champion Sarah Pavan guides you in this video where she demonstrates some specialized beach volleyball training. Whether you’re an experienced player or not, we bet this workout will challenge you.

With Heather Bansley at Rio 2016, Pavan reached the quarterfinals, tying Canada’s best ever result in beach volleyball with a fifth-place finish.

Because it’s not possible to do all her training on the beach, Pavan also works on her strength off the court. In this post, she proves that “long and lean” does not mean weak.

Does your serve need some work? Melissa Humana-Paredes made a little hype video that might just help.

Sarah Pavan’s partner since 2017, Humana-Paredes will be making her first Olympic appearance at Tokyo 2020.

Even when the sun isn’t shining, Samuel Pedlow seems to have a lot of fun perfecting his technique. Doesn’t it make you want to get out there too?

If your training ever leaves you sore, you can seek medical advice from the 2018 Commonwealth Games silver medallist, who is also a physiotherapist.

Before you can leap like a pro in the sand, you need to strengthen your legs. Take a lesson from Tokyo 2020 qualified athlete Grant O’Gorman as he shows off some squats.

The current partner of Grant O’Gorman, Ben Saxton finished ninth at Rio 2016 along with Chaim Schalk. To bring some variety to his training, he picked up yoga under the supervision of his wife, who just so happens to be an instructor.

Brandie Wilkerson attempted a smash… on the tennis court. Although she poses like a tennis pro, Wilkerson admits to being a complete beginner with the racquet. Maybe the similarities between volleyball and tennis will help her learn quickly?

READ: Brandie Wilkerson: How 2020 has been a year to learn, reset and find her voice

Wilkerson is currently trying to qualify for her first Olympic Games at Tokyo 2020 with her partner, Heather Bansley.

While she certainly prefers to run on the beach, sometimes Heather Bansley works her legs and cardio on the stairs.

Bansley, who finished fifth at Rio 2016 with Sarah Pavan, is trying to qualify for her second Olympic Games at Tokyo 2020, this time with her new partner Brandie Wilkerson.

It’s important to warm up your shoulders before lifting weights to avoid injury. Sam Schachter knows this well and takes his exercise seriously.

Schacter, who won silver at the 2018 Commonwealth Games with Samuel Pedlow, is also trying to qualify for his second Olympics. At Rio 2016, he teamed up with Josh Binstock where they finished 19th.

Is packing a chore? It doesn’t seem to be the case for Shanice Marcelle, who’s having fun and showing off her dance skills in this video. Clearly she was excited to get back to play in April after a long break.

Now a beach volleyball athlete, Marcelle previously represented Canada as a member of the volleyball team at the Toronto 2015 Pan Am Games.