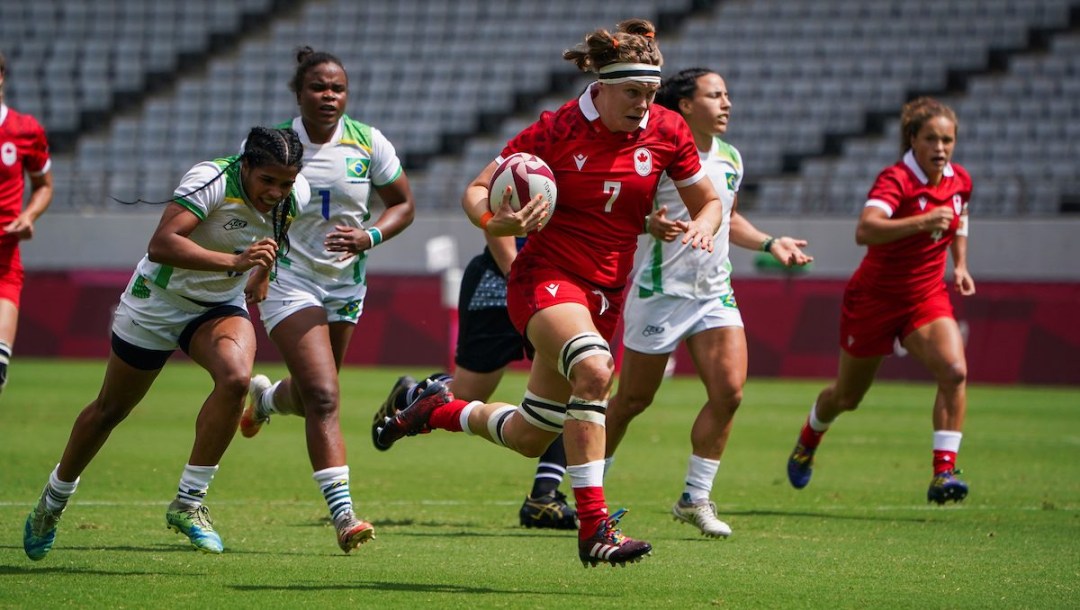 Team Canada is off to a 1-1 start in the rugby sevens women’s tournament at Tokyo 2020.

Captain Ghislaine Landry posted a game high 13 points in Canada’s 33-0 victory over Brazil in the first of two sessions on Day 6 of the Olympic Games. In the second match, Canada got off to a bad start and never recovered, falling 26-12 to Fiji.

Landry, Canada’s leading scorer at Rio 2016, had one try and went 4 for 5 on conversions in the first game. She added another try and conversion against Fiji.

Canada will look to get back in the win column on Thursday night (Friday morning in Tokyo) when they take on France. The French squad opened the tournament with a 12-5 victory over Fiji.

In the first game, Charity Williams got Canada on the board with a try in the final minute of the first half. Landry hit the conversion to give the Canadians a 7-0 lead.

“The first five line breaks they chased us down really well,” said Landry. “Credit to their speed and fitness. Obviously it’s massive for them and they made us work really hard. At halftime we really talked about just going 100 percent and I think you saw that in the second half.”

Canada got off to a quick start in the second half with Keyara Wardley scoring. Landry once again made the conversion to double the lead. At 3:07, Karen Paquin showed off some quick footwork to get through the Brazil defense and go in for the try. Landry made the kick once again to make it 21-0.

Canada got the ball to the line with just over 90 seconds remaining in the half. The team maintained possession and fed a wide open Landry who strolled in for the try – and made the conversion as well. Wardley would get another try late to make it a 33-0 final.

In the second game, Fiji came flying out of the gate, scoring just 20 seconds in and leading 21-0 at the end of the first half. Canada struggled to gain ball possession against a quick moving Fiji squad.

Fiji kept their foot on the gas pedal to start the second half, scoring 51 seconds in and taking a 26-0 lead. Landry got Canada on the board with a try and conversion at 3:31. Kayla Moleschi added another try late to make it a 26-12 final.

Keyara Wardley made her debut with the senior Canadian Sevens team at the Kitakyushu stop of the 2019 Sevens Series.…