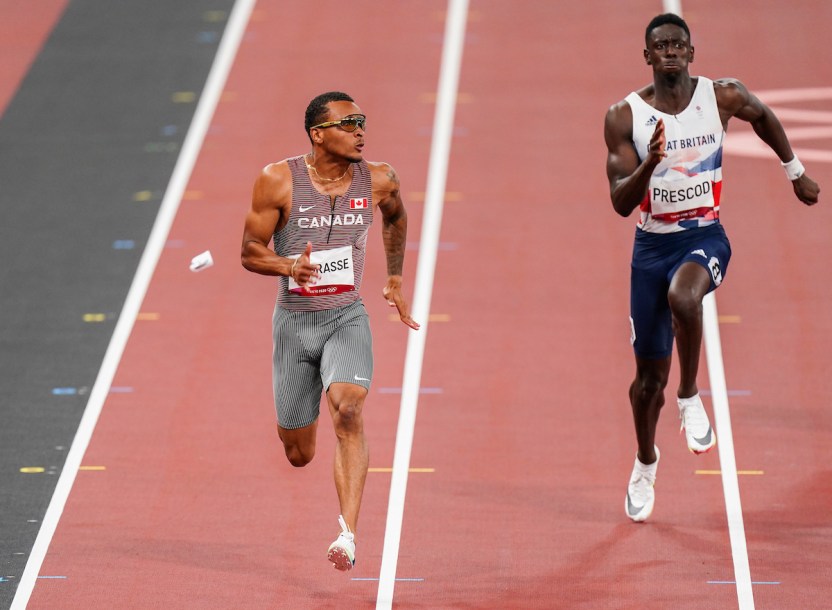 Andre De Grasse showed off his fine form on night two of athletics at Tokyo 2020.

He raced to a season-best matching time of 9.91 (just 0.01 seconds off of his personal best) in round 1 of the men’s 100m competition to start off his second Olympic campaign. The three-time Olympic medallist from Rio 2016, De Grasse and the field in heat 5 took a while to get underway, called back after two false starts. But the sprinter from Markham, Ont., stayed composed to advance to the semifinal with the fastest time in the field.

“I feel good,” said De Grasse. “It is a season’s best so I’m really looking forward to tomorrow night, I’m ready to go.”

De Grasse was running in lane 9, which he said helped him to not get distracted by the false starts down the line as he just had to focus and listen to the gun.

As for the pressure of being a returning Olympic medallist in the event, he said “I feel like people put it on me, but I enjoy it, I have fun with it. It just makes me feel better, that I am one of the guys that can bring home a medal to Canada. It is my second Olympic Games and I am enjoying the moment.”

Gavin Smellie and Bismark Boateng will not advance in the 100m, but will return to the track with Canada’s 4x100m relay team on Wednesday.

Crystal Emmanuel and Khamica Bingham were racing in the women’s 100m semifinal, clocking 11.21 and 11.22 seconds, respectively. They did not advance to the final, but Emmanuel will be back on the track for the women’s 200m.

A day after Team Canada watched Mohammed Ahmed give it his all in the men’s 10,000m final, they looked to use that performance to kick start them the rest of the way inside the hot and humid temperatures of the Tokyo 2020 Olympic Games.

“I tried to go as hard as I could,” Ahmed said after his sixth-place finish in the first medal race of athletics. “I’m a little disappointed in the finish but I’m not disappointed with the way that I ran it. There’s maybe some moves I could take back but other than that, I did it as best as I could.”

Sage Watson got the day session started, racing in round 1 of the women’s 400m hurdles. Finishing with a time of 55.54 seconds was enough to give Watson fourth place in heat 1 and the auto-qualifier into the semifinal. Noelle Montcalm ran a season-best 55.85 to finish in sixth in the heat, but it would not be enough onto the semifinal.

On the men’s side, Canadian record holder, Brandon McBride got off to a fast start in the men’s 800m, but struggled down the final stretch, finishing sixth with a time of 1:46.32 and did not advance. Making his Olympic debut, 22-year old Marco Arop showcased a dominant race, coming out victorious in his heat, finishing with a time of 1:45.26 and a spot in the semifinal.

“I felt great,” said Arop, the 2019 Pan American 800m gold medallist. “I couldn’t tell if it was the adrenaline or the track but I felt really good running 1:45.26 I’ve known all the time that I was in shape based on how training was going, but to see that time definitely gave me another boost in confidence.”