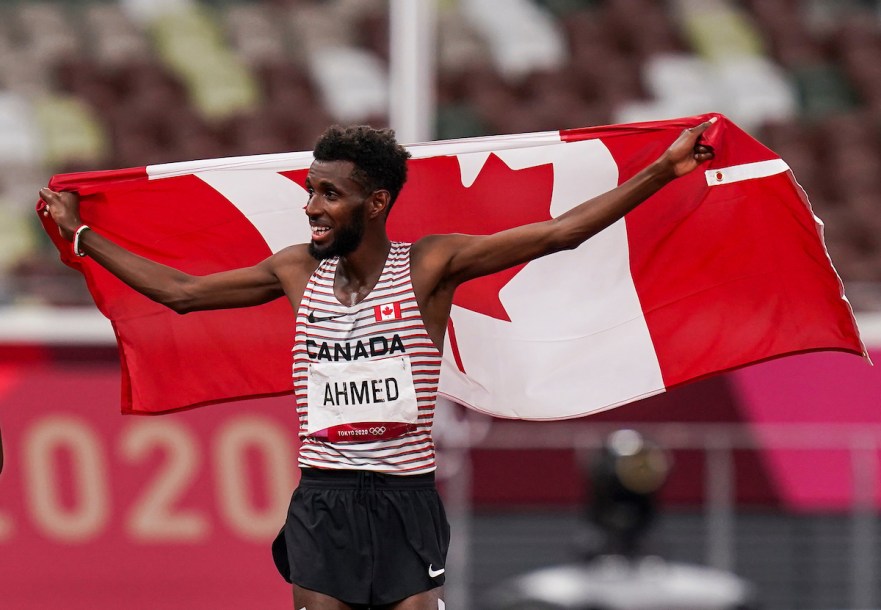 Patience paid off for Mohammed Ahmed.

A great burst in the final lap of the men’s 5000m race won Ahmed a silver medal on Day 14 at Tokyo 2020 — Canada’s first Olympic medal in a men’s long distance track event.

“That race was fast so all I had to do was just stay smooth,” Ahmed said. “Not many people were going to drop me.”

Ahmed stayed near the middle of the pack for much of the race and made his move in the final lap. At the bell, Ahmed was in sixth position and gradually began to pick up speed. At the final bend, the Canadian sped past American Paul Chelimo and Kenyan Nicholas Kipkorir Kimeli to move into the second position, crossing the line with a time of 12:58.61.

Joshua Cheptegei of Uganda won gold in a time of 12:58.15. Chelimo won bronze.

“I did not think this race was going to be fast,” Ahmed said. “I thought they were just going to let it go but Joshua (Cheptegei) came to play tonight. The real Joshua. That’s how he runs the best, up front where he dictates the pace.”

Despite the quick pace, Ahmed said he continued to tell himself to stay relaxed and keep running smooth.

“A lot of these guys are going to fade and I just got to kick. So that’s what I did.”

Making Canadian history is nothing new for Ahmed. In 2019 he won Canada’s first world championship medal in a long distance track event, winning bronze in the 5000m. He also owns the Canadian record in the event with a time of 12:47.20 set in July 2020.

Ahmed was racing in his third Olympic Games. He finished fourth in the 5000m at Rio 2016, which had been Canada’s best ever result until Tokyo 2020.

“I’m elated,” Ahmed said about his silver. “I was off the podium five years ago and it hasn’t been an easy five years for me. It’s been a lot of mental checks, a lot of doubts and uncertainty. All those things. I put a lot of work into this.

“That last 150m, that’s what I thought about. The amount of work that I put in.”

Ahmed also ran in the men’s 10,000m event earlier in the Games, finishing sixth with a seasonal best time of 27:47.76. The Canadian thanked his coaching and medical staff for helping him recover quickly from that race, allowing him to refocus on the 5000m.

“I think if I had fought a little bit harder and found some sort of strength I could have gotten a medal there too,” Ahmed said. “It’s just the way that it goes. I did what I had to do to try and pick myself up.”

Canadian Justyn Knight, running in his first Olympic Games, finished seventh in the 5000m with a time of 13:04.38. The 25-year-old finished 10th in the event at 2019 World Athletics Championships.