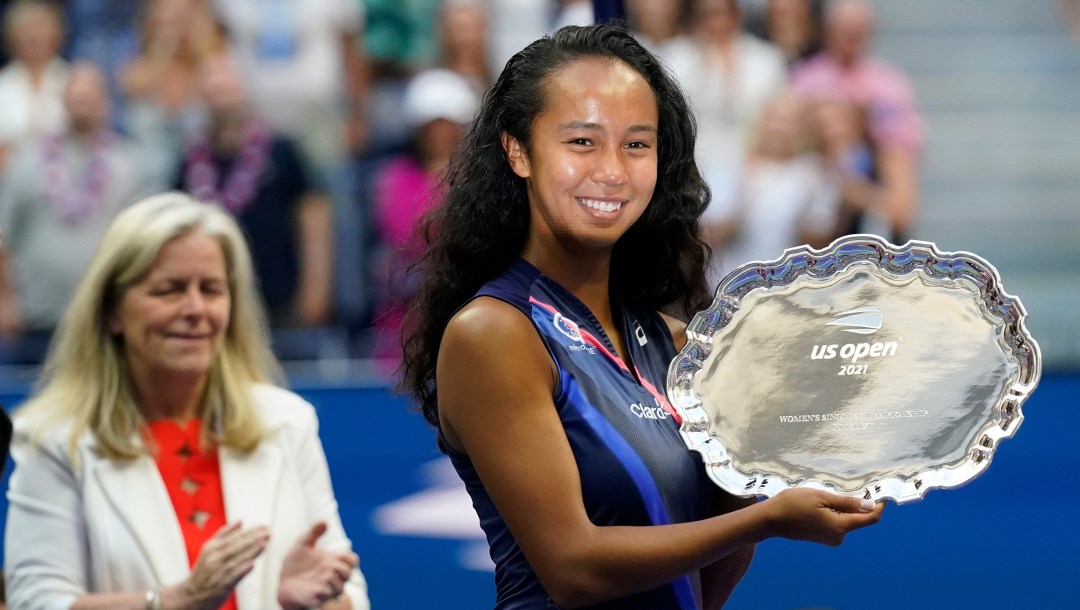 From making history at Flushing Meadows to dancing to the podium on Italian ice, Team Canada athletes rolled up their sleeves and got busy this weekend.

In case you missed the action, here’s what what happened:

Leylah Fernandez‘s historic run at the US Open came to an end on Saturday evening after a gruelling fight against Emma Raducanu of Great Britain. Fernandez was bested in the women’s final in straight sets, 6-4, 6-3. Rather than saying goodbye to Flushing Meadows, Fernandez said until next time.

READ: Here’s what people are saying about Leylah’s incredible run at the US Open
READ: By the Numbers: Leylah Fernandez, US Open Finalist

She may not have walked away with the championship trophy, but Fernandez walked away with the hearts and respect of everyone watching. A gracious post-match speech ended with Fernandez sharing a special message for New York and acknowledging the timing of Saturday’s final on the 20th anniversary of the 9/11 attacks.

Over the past two weeks, Fernandez has demonstrated a level of resilience and composure beyond her years. Just days removed from her 19th birthday, it certainly seems like the best is yet to come for this young star.

Also in action at the US Open was Montreal’s Felix Auger-Aliassime who reached the men’s singles semifinals before falling to Russia’s Daniil Medvedev — who would go on to win the title — on Friday afternoon. Auger-Aliassime also received the 2021 US Open Sportsperson Award.

In the women’s doubles semifinals, Gaby Dabrowski‘s partner Luisa Stefani of Brazil suffered a knee injury during the first set tiebreak and had to leave the court in a wheelchair, forcing the duo to retire from the match.

At the final meet of the 2021 Diamond League, Andre De Grasse sprinted his way to the podium, not once but twice. On Thursday at the Weltklasse in Zurich, Switzerland, De Grasse won the silver medal in the 100m, matching his personal best time of 9.89. Just over an hour later, De Grasse was back on the track for the 200m. Despite the lack of down time, De Grasse ran 19.72 seconds to wrap up the day with a second silver medal.

Cycling straight to the podium 🚴‍♀️

Team Canada cycled their way to a grand total of five medals at the UCI Track Cycling Nations Cup in Cali, Colombia capturing two gold, one silver and two bronze medals on the velodrome.

Skating to silver to kick off the season ⛸

After the rhythm dance, the duo stood in second position with 76.64 points, behind the home crowd favourite Italians, Charlene Guignard and Marco Fabbri. On Sunday the pair posted 108.62 points in the free dance for a final score of 185.26.

Ahead this weekend is the Autumn Classic in Pierrefonds, Quebec where there are many Canadian entries, including world bronze medallists Piper Gilles and Paul Poirier.

Flipping to a double podium 🤸‍♂️

In the final FIG World Challenge Cup of the season in Mersin, Turkey, Team Canada earned five medals, all won by Felix Dolci and William Emard. In the men’s floor exercise, both gymnasts were on the podium, with Dolci winning the event and Emard finishing third. Dolci also won silver in the horizontal bar. Emard won the vault and silver in rings.

One step closer to the World Cup 😤

On Wednesday evening, the men’s soccer team defeated El Salvador 3-0, in their third game of the third round of the CONCACAF World Cup Qualifiers. The top three teams after 14 games will earn a spot in the 2022 FIFA World Cup.

The fourth place team will be in the inter-confederation play-offs, for a final chance to qualify for the World Cup.