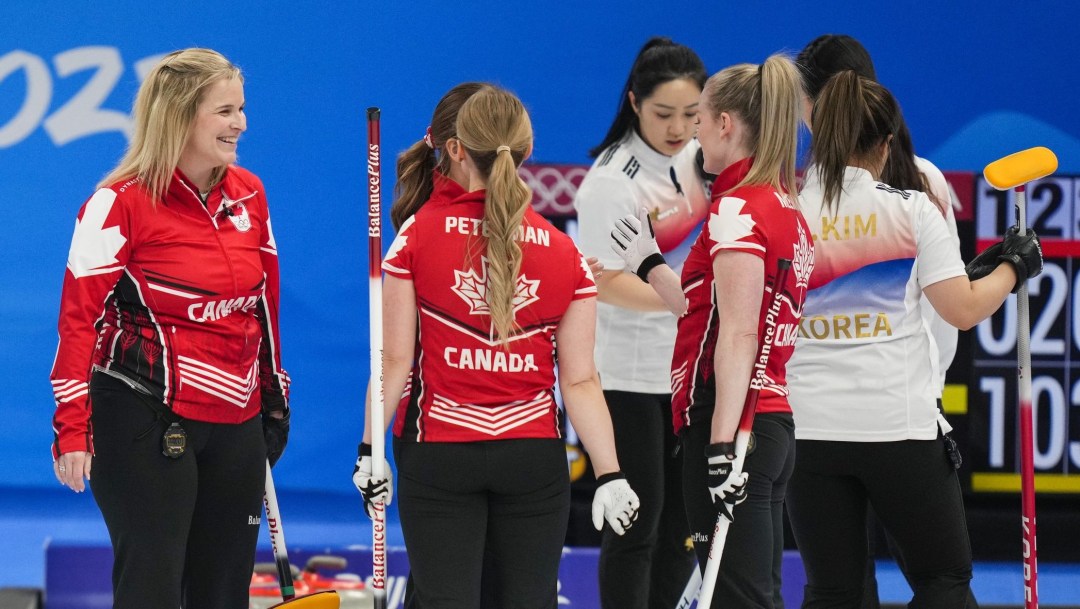 Jennifer Jones remained unbeaten in her Olympic Games career, posting her 12th straight victory in a wild and entertaining 12-7 shoot-out win over South Korea on the first day of women’s curling at Beijing 2022.

With South Korea, skipped by Eun-Jung Kim, playing aggressively on offence there were plenty of rocks in play every end and both teams jumped on their opponents’ misses to post multiple scoring ends.

“What a fun game to play,” the always upbeat Jones said of the win. “It’s nice to get that first win out of the way. For our first game, the ice was unbelievable, the hits for runs stayed and the draw weight was fairly consistent so you’ll see a lot of good shots.

“Our first competitive game since the (Canadian Curling) Trials (in November) so to come out here and score, well the defence maybe needs a little bit of work, but we scored a lot of points, made a lot of good shots, made a lot of great sweeping management (decisions).

“I’m really happy with how we performed for our first game out there, I thought we made a couple of mistakes but we made a lot of big shots to win the game.”

Jones, third Kaitlyn Lawes and lead Dawn McEwen are seeking a second Olympic gold to match the one they captured in 2014. Second Jocelyn Peterman is looking for her first after joining the team in 2018-19.

“It was nice to get out there and get a good feel for the ice, it felt surprisingly comfortable, same game I guess,” Peterman said of her Olympic debut. “In practice yesterday I took a bit more time to feel the excitement of the rings on the handle and stuff, but today, not focusing on that. Really focusing on our routines and just staying in the moment.”

It didn’t take long for the shootout to get underway after Canada forced Korea to take a single in the first end. Kim missed a double takeout in the second, leaving Jones a hit and stick for two. Misses by Peterman and Lawes opened the door for Korea to score three in the third on a nose hit after Jones couldn’t execute a double.

But Jones, who went through the 2014 Olympic Games unbeaten in 11 matches and was the top-shooting skip, bounced back in a hurry in the third. She made a quintuple runback tap on her first stone and a double runback to get rid of two Korean rocks with her second to score three in the fourth.

In the final four ends Kim and her foursome, nicknamed the Garlic Girls during their silver medal run at the 2018 Games in PyeongChang, missed key shots that eliminated a number of opportunities to score multiple points.

The South Korean team is ranked No. 7 in the world so Jones’ next game will be against a slightly more challenging opponent in World No. 5 Satsuki Fujisawa and her Japanese foursome. And it only gets more difficult after that with Sweden and Switzerland on the immediate horizon.

However Jones, at 47 the oldest Team Canada athlete here, isn’t expecting to run through the 10-team round robin and the playoffs like her team did in 2014.

“It’s going to be really hard in this field to go through undefeated. Our goal is to try to make the semi, no matter the position we are in, and just try to make a bunch of shots along the way and give ourselves a chance.”