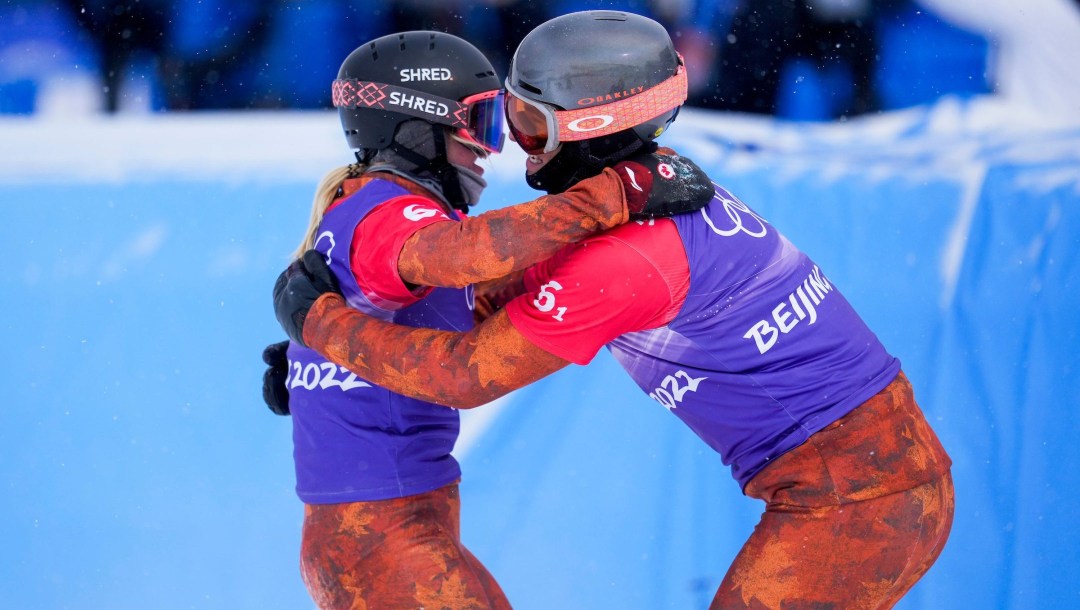 That’s what Meryeta O’Dine told herself midway through her part of the mixed team snowboard cross final on Day 8 — and she was right.

The four-team final was tight on a blustery, snowy day at Genting Snow Park. In Wave 1, featuring the men’s competitors, Eliot Grondin finished third but was just 0.23 seconds off the pace; all four men finished within a second. That meant that in the decisive Wave 2, the women would be tightly grouped from the start.

With all four seeking the fastest line on the first jump portion of the course, O’Dine chose a low flight trajectory. Meanwhile, Caterina Carpano of Italy “popped it as hard as she could”, in O’Dine’s words. The result?

“I got landed on!” O’Dine said. “It’s a part of this sport, it’s what you train for and why you wear so much armour, anything can really happen.”

O’Dine ended up face-first in the snow, underneath Carpano’s board. The gold and silver medals were instantly out of reach, but a third-place finish was still possible.

“I dug my head into the snow and popped it up and realized that I was doing a little bit better than she was,” said O’Dine. “I got up and just said ‘get over this jump first and try to make it to the finish line before she does, because there’s one more medal up for grabs and I want it.'”

Down at the bottom of the hill, Grondin had no idea what was happening. The video screens at the venue showed only the first two snowboarders continuing to progress through the course.

“It was quite stressful,” said Grondin. “I didn’t know if she was OK, or anything. So I was just waiting and hoping she was fine and that she kept going.

“Then I saw her name on the split times and I said, ‘Come on!’ Then she jumped to the finish line and I was like, ‘Ahhh, we did it!’ It’s crazy, unreal.”

This was the first time that the mixed team event was on the Olympic program and despite the dramatic collision, O’Dine was clearly in high spirits after the final.

“It hasn’t really set in yet. It’s absolutely crazy, it’s a really cool feeling. I’m so glad to be able to do it with Eliot,” she said.

“This event is so much fun … I definitely put more pressure on myself for this event than the individual, just because you have someone relying on you. You want to do the best that you can, to your ability, to help them achieve their goal too. So it’s your goals and their goals and they come together, for sure.”

Grondin was similarly enthused about the addition of the event.

“Just to get the chance to race again and prove to everyone how good we can be is a privilege,” he said.

“I approached today the same as the (individual event): I just wanted to have fun and I think we had fun. So I’m stoked, we just enjoyed the day, worked as hard as we could to be the best that we can and we got third.”