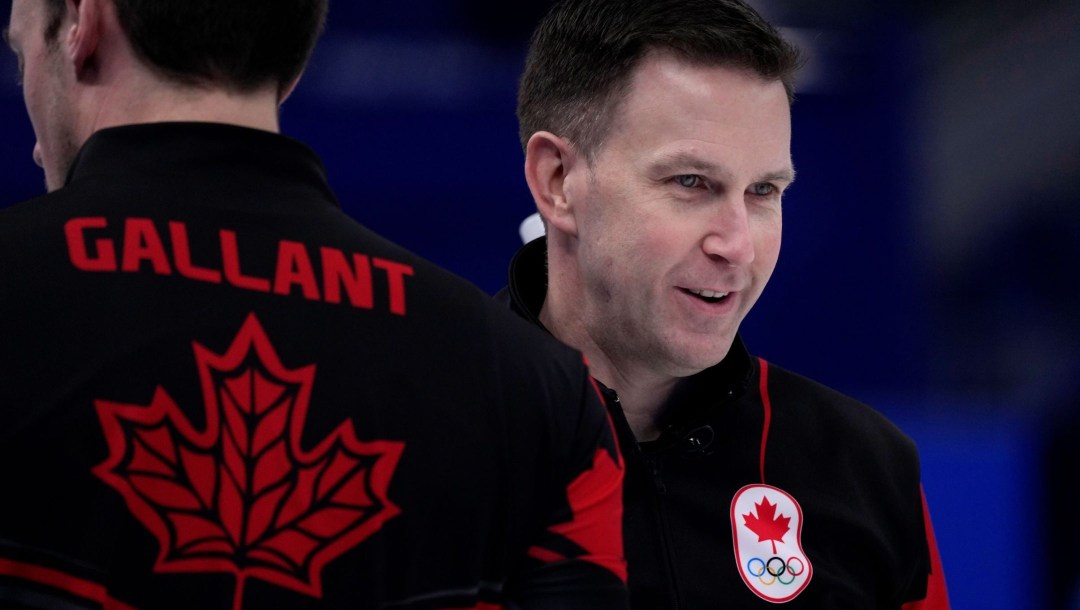 Patience and excellent shooting by Team Canada proved too much for Team Italy on Monday afternoon in Beijing.

Brad Gushue jumped on opportunities to outscore Joel Retornaz 5-1 in the final four ends for a 7-3 victory in men’s curling at the 2022 Olympic Winter Games.

The two teams were deadlocked 2-2 after five ends but Gushue scored two in the sixth and three in the ninth to improve their record to 4-2 in the 10-team round robin. It was a game where sweepers played a major role in controlling shots, either keeping them straight or making them curl as both teams had some issues with rocks and ice. And patience, said Team Canada third Mark Nichols, was another key to the win.

“If you press early, thinking you should be out to a bigger lead early, you press, make a mistake and they get ahead. That’s not what you want,” he said. “This ice is really good when you’re leading. It’s tough to generate big ends so you keep it close, try to wrestle the hammer away from the other team and get a bit of a lead and make the other team come to you. We did that really well tonight.

“Stealing one was nice because it flipped the hammer right away and getting the force and getting the hammer back was good,” he added. “We didn’t go crazy for points and when we finally got a mistake we were able to get those extra points.”

At the fifth-end break Gushue said his team was having difficulty getting their rocks, which had been sanded to create more curl, into the right positions, forcing them to play cautiously. After giving up a steal in the first end, Retornaz, who beat Gushue 7-6 in an extra end 16 years ago at Turin 2006, was content to also play a cautious game. That resulted in an exchange of singles through four ends and a blank in five.

“There’s a lot of stuff going on,” Gushue said at the break. “The ice is curling quite a bit more. It has more of a gritty feeling, which is nice so we’re getting a bit of a finish. We’re just trying to figure out the rocks. The ice is good it’s just completely different from what it’s been the last couple days.”

Lead Geoff Walker and second Brett Gallant parked their stones where Gushue wanted them in the sixth end. Two half-shots by Italy – third Amos Mosaner wrecked on a guard on a hit-and-roll and skip Joel Retornaz got only one Gushue stone on a double try – left Gushue a routine hit-and-stick for two.

Italy blanked seven to get the hammer on the even ends and after five ideal shots to start the eighth were in position for a possible three-point end. Until Mosaner, who earlier won mixed doubles gold for Italy’s first Olympic medal in curling, came up short of the house trying to draw behind cover. That allowed Canada to turn the end and ultimately forced Italy to take a single.

Italy had trouble executing double take outs in the ninth end, three times getting only one Canadian stone and that eventually left Gushue with a hit-and-stick to count three for the win.

“We’re playing well,” added Gushue. “I don’t think we’re firing on all cylinders yet. Our draw weight and our judging is just a little bit off … but I feel we’re all throwing relatively well and once we get used to the (sanding) of the rocks we should be fine. I like the extra curl for sure and hopefully it holds up, but it was a different feel…so you’re a little on edge not knowing what to expect. A couple of games, seeing that extra foot of curl, it’s going to be nice.”

With three games remaining in the round robin to determine the four playoff teams, Canada sits in third place behind 6-0 Sweden and 5-1 Great Britain. Russia, Switzerland, and the defending champions from the United States are close behind at 3-3.