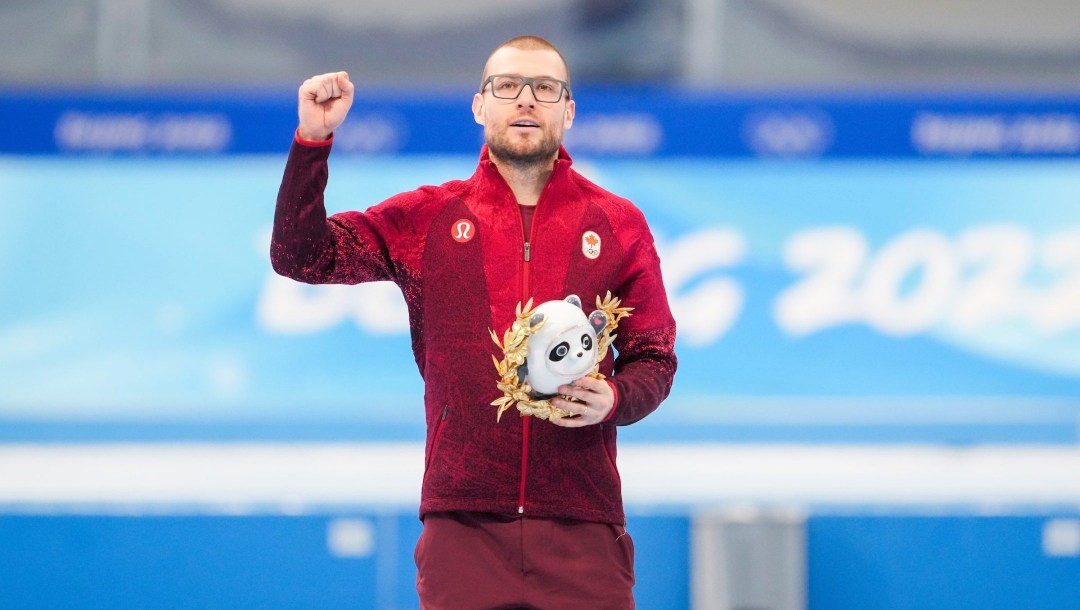 It can take some time to get over a fourth place finish at an Olympic Games. Laurent Dubreuil had just a few days.

“I’m speechless,” Dubreuil said after finishing the men’s 1000m with the second best time of 1:08.32. “I thought I had a good chance at a medal this week, more so in the 500m where I finished fourth. I had a tough week trying to get over that. It’s a big shock to get a medal, it is amazing. It took a lot of belief and a lot of support to turn things around, and I’m really proud.”

Racing in the final pair with Kai Verbij of the Netherlands, Dubreuil used his 500m speed to get off to a tremendous start in the opening lap. He carried that momentum throughout the race, finishing 0.40 behind Thomas Krol of the Netherlands, who won gold with a time of 1:07.92. Krol previously won silver in the 1500m race.

Haavard Holmefjord Lorentzen of Norway won bronze with a time of 1:08.48.

In a post-race interview with CBC, a smiling Dubreuil said he gave himself 24 hours to get over the 500m result that saw him finish just 0.03 short of the podium. It probably took him closer to 72 hours, he said.

“I showed up here today knowing that I wasn’t the favourite but I could do it,” he told CBC. “I had good legs but I just needed to skate a bit smoother and a bit more relaxed and I managed to do that while going faster. It was a really good execution today and I’m really happy I did it.”

While Dubreuil may not have considered himself a favourite in the 1000m, his success doesn’t come as a surprise. The 29-year-old has won bronze in the event at each of the past two ISU World Single Distances Championships. He’s also stood on several World Cup podiums in the 1000m.

Dubreuil won gold in the 500m at the 2021 World Single Distances Championship and has had more international success in the shorter race. His 1000m training paid off.

“This silver medal feels like a win,” said the Lévis, Quebec native. “The fourth place in the 500m felt like a disaster.

“This is a week I will remember for a long time. The last four years I’ve trained a lot on the 1000m to give myself another chance. If you only compete in one distance and mess up, it’s over. Now I had another chance.”

Keeping things in perspective, Dubreuil said the Olympic silver is a reward for many years of hard work — but it won’t be what defines him as a person.

“It is a bonus on top of my happy life so far. I want to thank my family, friends and support team but especially my daughter and my wife — without them I would not be as happy and as balanced in life. It was because of them I was able to turn it around.

“I know that sport doesn’t define me. I’m not scared going into a race because I know that even if I fail, I’m still going to go home and they are going to love and support me.”