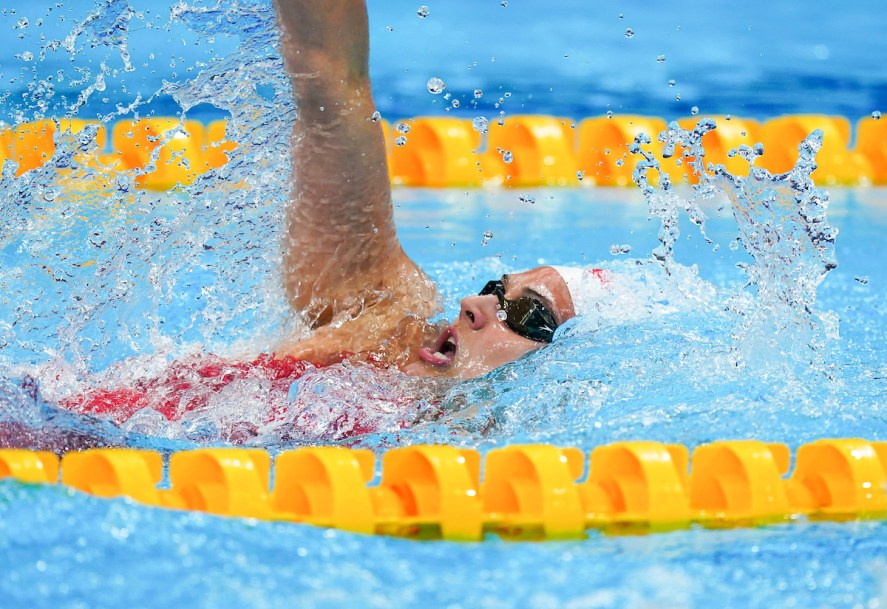 On day one of the third leg of the Mare Nostrum Swim Tour, five Canadian swimmers — Kylie Masse, Ingrid Wilm, Summer McIntosh, Margaret Mac Neil and Penny Oleksiak found themselves on the podium in Canet-en-Roussillon, ​​France. After previous stops in Monaco and Barcelona, the Mare Nostrum Tour concludes this weekend.

READ: Three more medals for Team Canada at the Mare Nostrum in Barcelona

Four-time Olympic medallist Kylie Masse led the medal haul with two victories on Saturday. In the first competition of the day, she finished three tenths ahead of the field in the shortest women’s backstroke race. She touched in 27.47 seconds, about three tenths off her season-best mark of 27.18 that ranks second in the world. France’s Analia Pigree finished second in 27.76 ahead of Canadian Ingrid Wilm in 27.81.

Masse went on to win the 200m backstroke for her second victory of the day. Masse was the Olympic silver medallist in this event and ranks sixth in the world for 2022 at 2:07.66. Today she touched in 2:09.34, a second-and-a-half ahead of Hungary’s Eszter Szabo Feltothy (2:10.98) in second. France’s Pauline Mahieu (2:11.10) rounded out the podium with bronze.

15-year-old Summer McIntosh scored a big victory in the women’s 200m medley race. she beat a strong field that included the Olympic gold medalist Yui Ohashi of Japan and the world-record holder Katinka Hosszu of Hungary. McIntosh won the distance in 2:10.75, moving into a tie for eighth in the world. Ohashi (2:11.28) and Britain’s Abbey Wood (2:11.35) finished second and third respectfully. Fellow Canadian Sydney Pickrem finished in sixth position with a time of 2:12.35.

At just 14-years-old, McIntosh was the youngest athlete on all of Team Canada at Tokyo 2020. She finished fourth individually in the 400m freestyle while lowering the Canadian record to 4:02.42 and as the leadoff swimmer for the 4x200m freestyle relay.

In the last women’s event of the day, Canada’s all-time most decorated Olympian Penny Oleksiak entered the pool to capture a bronze medal in the 200m freestyle. She finished with a time of 1:57.77 behind France’s Charlotte Bonnet (1:57.35) and Great Britain’s Freya Anderson (1:57.48).