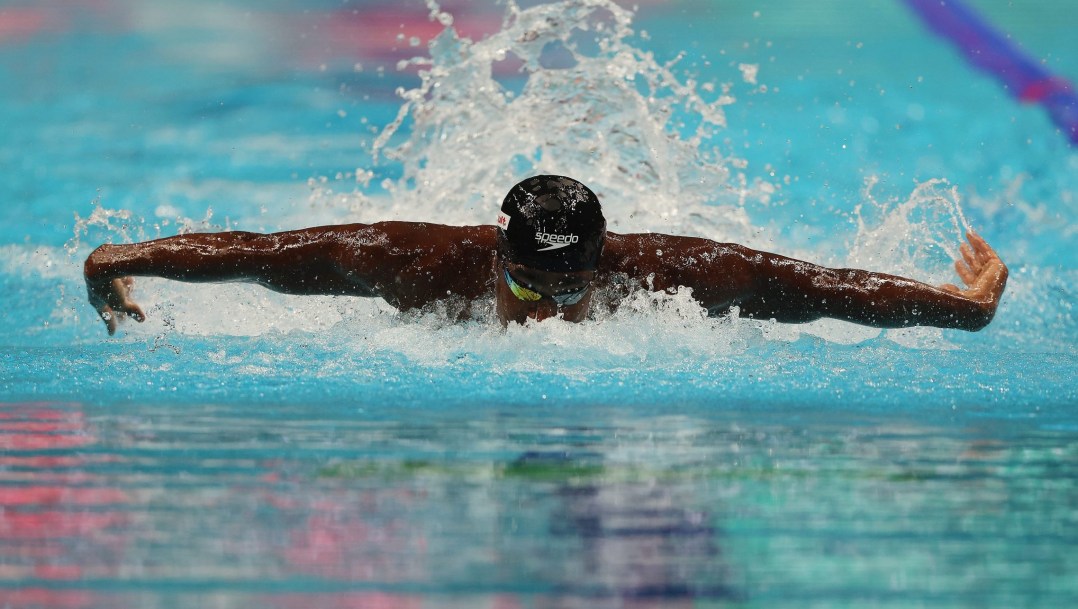 Joshua Liendo has won his second and third medals at the 2022 FINA World Aquatics Championships. He took bronze in the men’s 100m butterfly and then helped Canada claim silver in the mixed 4x100m freestyle relay on Friday.

Liendo’s time of 50.97 in the 100m butterfly was less than a tenth of a second off the national record he set during the Canadian trials in early April.

Outside the top three at the turn, Liendo moved into a podium position on the second length of the pool. He was narrowly out-touched at the wall by Naoki Nizunuma of Japan, who took the silver medal by just 0.03 of a second ahead of the 19-year-old Canadian. Kristof Milak thrilled the home crowd in Hungary with his victory in 50.14 seconds.

The podium performance came just about a half hour after Liendo finished fifth in the 50m freestyle final, missing a medal by only 0.04 of a second. His time of 21.61 seconds broke his own national record he had set in April by 0.02 of a second. Liendo had gone into both finals as the third-fastest in Thursday’s semifinals.

It has been 49 years since a Canadian won a medal in the men’s 100m butterfly at the long course worlds. Bruce Robertson was the world champion way back in 1973 when the FINA World Aquatics Championships were held for the first time.

On Wednesday, Liendo won the bronze medal in the men’s 100m freestyle, the first Canadian reach the podium in that event since 2011. He is the first Black Canadian to ever win a swimming medal at the long course worlds. He’s just the fifth man to ever win medals in the 100m freestyle and 100m butterfly at one edition of the world championships.

In the mixed 4x100m freestyle relay, which is not an Olympic event, Liendo swam the leadoff leg and was in a tight battle against Australia and the United States for the top three spots. Javier Acevedo followed and kept Canada in a podium position as he handed it over to Kayla Sanchez. Australia then started to pull away, leaving Canada and the United States to fight it out for second place. Penny Oleksiak, the anchor swimmer, moved ahead of American Claire Curzan in the last few metres of the race to get Canada the silver medal in a national record time of 3:20.61.

Australia won the gold with a world record performance (3:19.38) as the United States (3:21.09) finished almost half a second back of the Canadians.

The silver is the eighth career medal for Oleksiak at the World Aquatics Championships, tying her with Ryan Cochrane for the most won by a Canadian swimmer. All of her medals have come in relay events. A stalwart of the relays, Sanchez now has five career world championship medals.

Ruslan Gaziev, Taylor Ruck, and Maggie MacNeil will also receive medals after swimming in the morning preliminaries alongside Acevedo.

Canada now has nine medals (two gold, four silver, three bronze) in the swimming pool in Budapest, one more than the overall total from the 2019 World Aquatics Championships.

Saturday will mark the conclusion of the swimming events at the FINA World Championships. The finals can be streamed starting at noon ET on CBCsports.ca and CBC Gem.