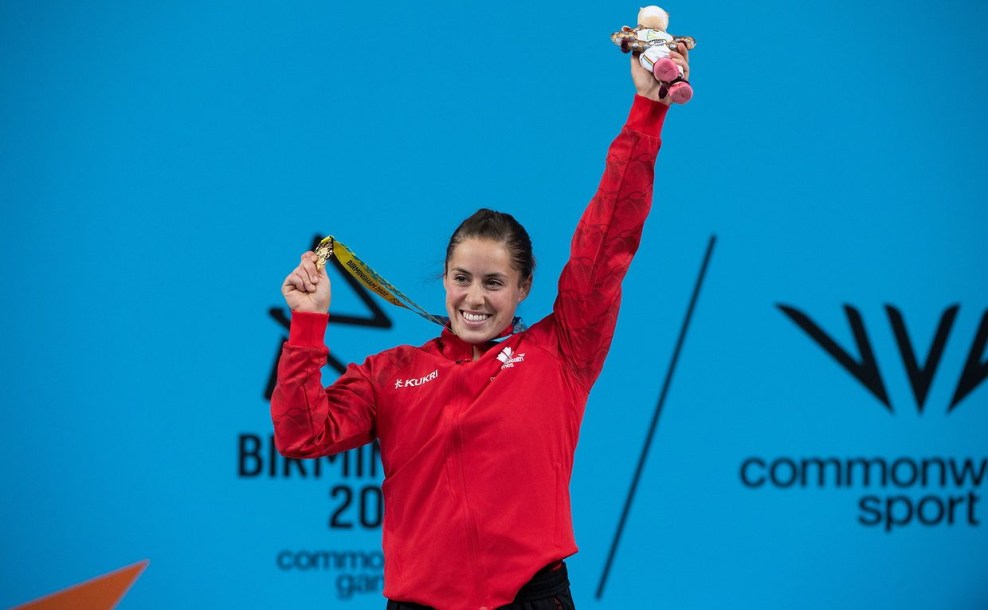 The medals kept coming for Team Canada on day four of the 2022 Commonwealth Games in Birmingham, England.

Incase you missed the action, here’s a quick recap of what happened:

Summer McIntosh does it again! The recently crowned world champion snatched a Commonwealth gold in the women’s 200m individual medley with a time of 2 minutes 8.70 seconds. Australia’s Kaylee McKeown touched in 2:09.52 for silver and England’s Abbie Wood finished in third after swimming 2:10.68. Canadian teammate Mary-Sophie Harvey also competed in the final, finishing in sixth position with a time of 2:12.48.

This is the 15-year-old’s second gold medal and fourth medal overall at Birmingham 2022. She dominated the women’s 400m individual medley final to win gold, bronze in the 4x100m freestyle relay final, followed by silver in the 4x200m freestyle relay.

After claiming silver in the women’s 100m backstroke on Sunday, Kylie Masse was looking to defend her title in the women’s 200m backstroke. The 22-year-old came up short of gold, touching in 2 minutes and 7.81 seconds to finish behind Australia’s Kaylee McKeown, who set a Games record of 2:05.60. Scotland’s Katie Shanahan rounded out the podium with a time of 2:09.22. This is her second silver medal in Birmingham.

On the men’s side, Javier Acevedo won bronze in the 50m backstroke final. He had a blistering start and hung on at the wall to finish in Canadian record time of 24.97 seconds. New Zealand’s Andrew Jeffcoat (24.65) and South Africa’s Pieter Coetze (24.77) finished first and second respectively.

Kelsey Mitchell collected her fourth and final medal of the Commonwealth Games in the women’s keirin final at Lee Valley VeloPark in London. After claiming three silver medals through the first three days of competition, Mitchell added a bronze to her collection while finishing 0.156 seconds behind gold medallist Ellesse Andrews of New Zealand. England’s Sophie Capewell took silver, coming 0.050 seconds shy of Andrews.

Maggie Coles-Lyster also reached the podium, cycling to her first medal of Birmingham 2022. She claimed bronze in the women’s 10km scratch final. The 23-year-old finished behind Laura Kenny of England, who struck gold, and silver medallist Michaela Drummond of New Zealand.

Four artistic gymnasts landed on the podium on day four. Laurie Denommée captured her first individual podium. The 21-year-old won silver in the women’s vault final. She tied with gold medallist Georgia Godwin of Australia at 13.233 points, but missed out on first place due to the highest execution score criteria.

On Sunday, Spence finished the women’s all-around competition with bronze.

In the men’s floor exercise, Félix Dolci claimed his second silver medal, marking Canada’s 20th medal of the 2022 Commonwealth Games. It’s also Dolci’s first individual medal at the Games. The 20-year-old earned 5.900 difficulty points and 8.266 execution points. He finished with a total of 14.166 points, 0.500 behind gold medallist Jake Jarman of England and 0.200 ahead of England’s Giarnni Regini-Moran, who took bronze.

Over to the men’s pommel horse, Jayson Rampersad successfully found his way on the podium. He captured a bronze medal with a score of 14.000. Rampersad, who just celebrated his 19th birthday on Sunday, had a 5.900 difficulty score and 8.100 points in the execution column to finish behind Northern Ireland’s Rhys McClenaghan (14.133) and England’s Joe Fraser (14.833).

On the rings, Chris Kaji added a fourth medal for Canadian artistic gymnasts with a bronze medal. The 22-year-old had scores of 5.900 in difficulty and 8.366 in execution for a total of 14.266 points. He was 0.034 of a point shy of silver medallist Sokratis Pilakouris from Cyprus. England’s Courtney Tulloch won the event title with 14.400 points.

On Friday, Dolci, Rampersad and Kaji helped Canada claim silver in the men’s team event along with Mathys Jalbert and Kenji Tamane.

Canadian weightlifters added three more medals to their haul on Monday. Maude Charron set multiple records while becoming the first Canadian weightlifter to climb the top podium step at Birmingham 2022. She set a Commonwealth Games Record in the snatch, lifting 101kg in her third attempt. She went on to set another Commonwealth Games Record of 130kg in the clean & jerk. She listed a Games record total of 231kg.

Charron finished 15kg ahead of silver medallist Sarah Cochrane of Australia and 19kg ahead of Nigeria’s Islamiyat Adebukola Yusuf. The 29-year-old is the reigning Olympic champion in the same event, and she also won gold at the 2018 Commonwealth Games in the women’s 63kg event. Charron served as one of Canada’s flag-bearers at the opening ceremony along with Paralympic wheelchair racer Josh Cassidy.

In the women’s 71kg event, Alexis Ashworth finished with a silver medal. The 23-year-old lifted a total weight of 214kg after listing 91kg in her second snatch attempt and 123kg in her third clean & jerk. England’s Sarah Davies finished in the gold medal position in Commonwealth Games record weight of 229kg. India’s Harjinder Kaur finished with bronze after listing 212kg.

Nicolas Vachon was the first to collect a medal for Canada on day four. In a thrilling men’s competition, he lifted his way to a bronze medal in the 81kg weight class. The 26-year-old lifted a total weight of 320kg after successfully listing 140kg in his final snatch attempt and 180kg in his second clean & jerk attempt. Vachon was five kilos shy of the weight lifted by gold medallist Chris Murray who set a Commonwealth Games record in the clean & jerk. Australia’s Kyle Bruce finished with silver and 323kg lifted.

Canada’s first-ever judo world champion Christa Deguchi won the women’s 57kg division. She overcame Acelya Toprak of England. The English judoka battled hard as she received a shido at the midway point in the bout. Deguchi landed a waza-ari with just over a minute left of normal time only for the score to scrubbed off following a video review. With two seconds remaining, Toprak picked up a second shido but managed to force Deguchi into golden score. The Canadian was then penalized for the first time before picking up another as hope over a shock home victory grew inside the arena. But Deguchi silenced the home fans when she flipped Toprak onto her back for an ippon.

Christa joins her sister Kelly as a medallist in Birmingham 2022. Competing in her first Commonwealth Games, Kelly Deguchi won silver in the 52kg judo final earlier in the day.

Audrey Lacroix participated at her second consecutive Olympic Games and finished 12th in the 200m butterfly event in London. She…