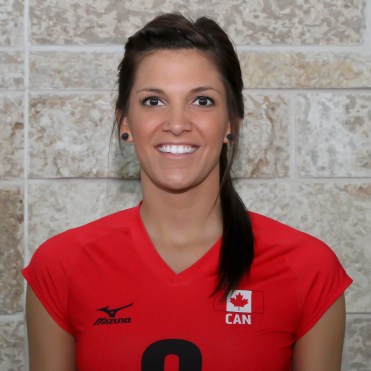 Jaimie Thibeault joined the national team in 2010, playing with the B team in 2010 and 2011. At the 2013 Pan American Cup, Thibeault was named Best Blocker. She attended the University of Montana on a full scholarship where she enjoyed four successful seasons, winning Freshman of the Year in 2008, Female Athlete of the Year in 2011 and four-time First Team All-Conference awards. Thibeault played professional in France and Italy before moving to Poland in 2014.

Family: Parents Jos and Patti Thibeault… Older brothers Corey and Tyrell… Registered with the T’Souke First Nation in British Columbia… Getting into the Sport: Started playing volleyball in grade 5 after being surrounded by the sport because both parents played… Outside Interests: Enjoys movies, reading, camping, hiking, mountain biking… Is a certified Elementary Teacher after earning her Bachelor of Education in 2010… Odds and Ends: Nicknames: Jaim, JT, Jam Face, Jayjay… Has a lucky sports bra and her game-day hair is always a braid through her bangs… Collects shot glasses from her travels for her brother… Favourite motto: “How you respond when you are challenged is where you find respect for yourself and from others… Being willing to risk failure is often the result of being hungry for success”…

Kate Psota is a veteran of the women’s national team, having appeared in every IBAF World Cup since its inception...