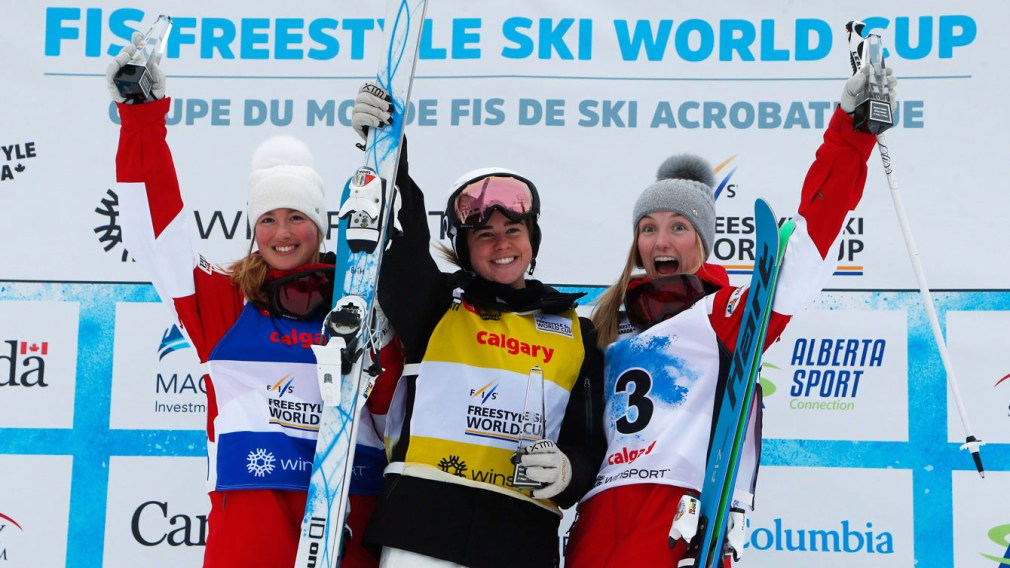 From Team Canada’s first world championships of 2017, to one of the biggest winter sports compeitions, athletes impressed fans and judges on their way to the podium.

Read: McRae breaks through with bronze at worlds

On Saturday Kimberley McRae became the second Canadian to ever win an individual medal at a world luge championships. McRae raced to bronze in the women’s event, after launching a massive comeback from 10th place after her first of two runs.

Craziest finals I've ever took part of!! So stoked to win for a second year in a row at @xgames!!! 😃 @nobaday_sports @monsterenergy @bromont_montagne #Freedom55 #snowboarding

It was mission accomplished for Max Parrot, after he defended his big air gold medal from 2016. Once again Parrot shared the podium with Mark McMorris who finished third.

#WhileYouWereSleeping Our girl @laurieblouin1 was saying "ciao" to the rest of the competition, taking 2nd at the Seiser Alm World Cup Slopestyle in 🇮🇹! Congrats to @Ennirukajarvi on the W and @Sinacandrian on 3rd! 📷: @Fissnowboarding #OhCanada

Over in Italy Laurie Blouin landed a spot on the FIS World Cup podium in Sieser Almwith a silver medal in slopestyle.

It's a dream come true! @xgames medal in slopestyle! Just unbelievable! Thanks for everyone helping me get there and supporting me in my dreams! Feeling blessed! 📸: @chasenmarshall @monsterenergy @oakleyskiing @voelklskis @freestylecanadaski

Alex Beaulieu-Marchand got his first taste of an X Games podium on Saturday, after he nabbed bronze in ski slopestyle. After a torn ACL in 2015 and a broken left collarbone in 2016, Beaulieu-Marchand is back and ready to compete for a spot atop of the podium.

Noah Bowman returned to the podium in Aspen for the first time since 2012, clinching bronze in ski superpipe the halfpipe equivalent at X Games.

Moguls skiers had their second straight World Cup event on Canadian snow on Saturday. After helping give Canada a sweep last weekend in Quebec, sisters Justine and Chloé Dufour-Lapointe shared the podium once again, finishing second and third in Calgary. In the men’s event Mikaël Kingsbury scored silver, giving Canada a total of three medals.

At the final World Cup stop before the single distances world championships in February, Ted-Jan Bloemen won gold in the 5,000m. With worlds doubling as the PyeongChang 2018 Olympic test event, long track speed skaters will get their first test run of the Gangneung Oval.

Had a great time wrestling in my first tournament back from the Olympic Games. It feels so good to be back! #paris #teamcanada #wrestling #newgoals

Olympian Michelle Fazzari stepped on the mat for her first compeition since Rio 2016, taking gold in the 58kg category at the Paris International. Braxton Stone-Papadopoulos also earned a spot on the podium finishing third in 68kg category.

May have taken me four weeks of competing over and over again but I'm finally figuring out how to keep pressure threw the jump!!👏🏼This was my jump at 4.53m this weekend .. Got to take one step back in order to take two steps forward ! #NBIGB #PoleVault #2017