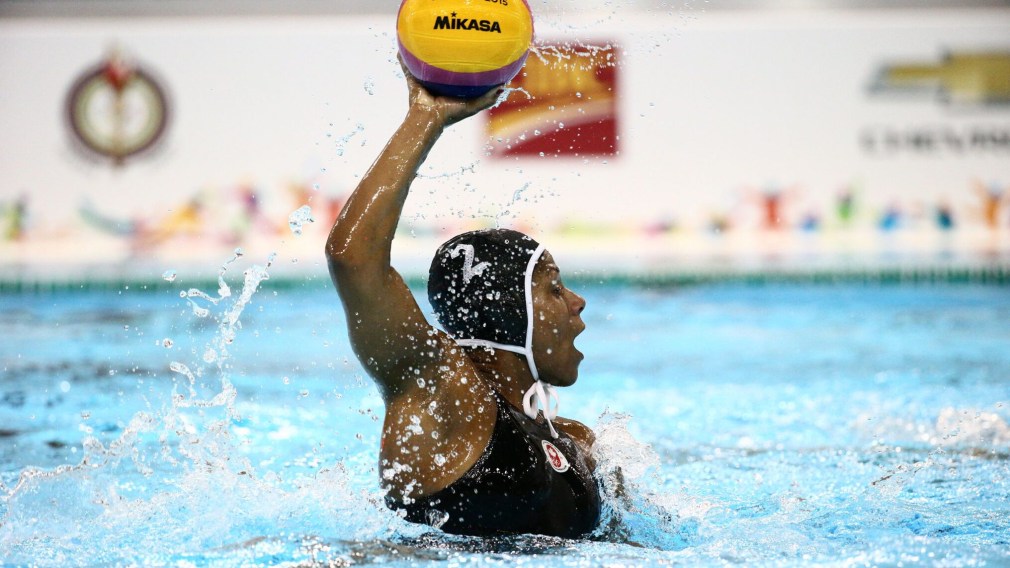 Water Polo Canada has announced its women’s and men’s rosters for the FINA World Championships which start this weekend.

We’ve got the scoop on who made the team and when they’re in action in Budapest. 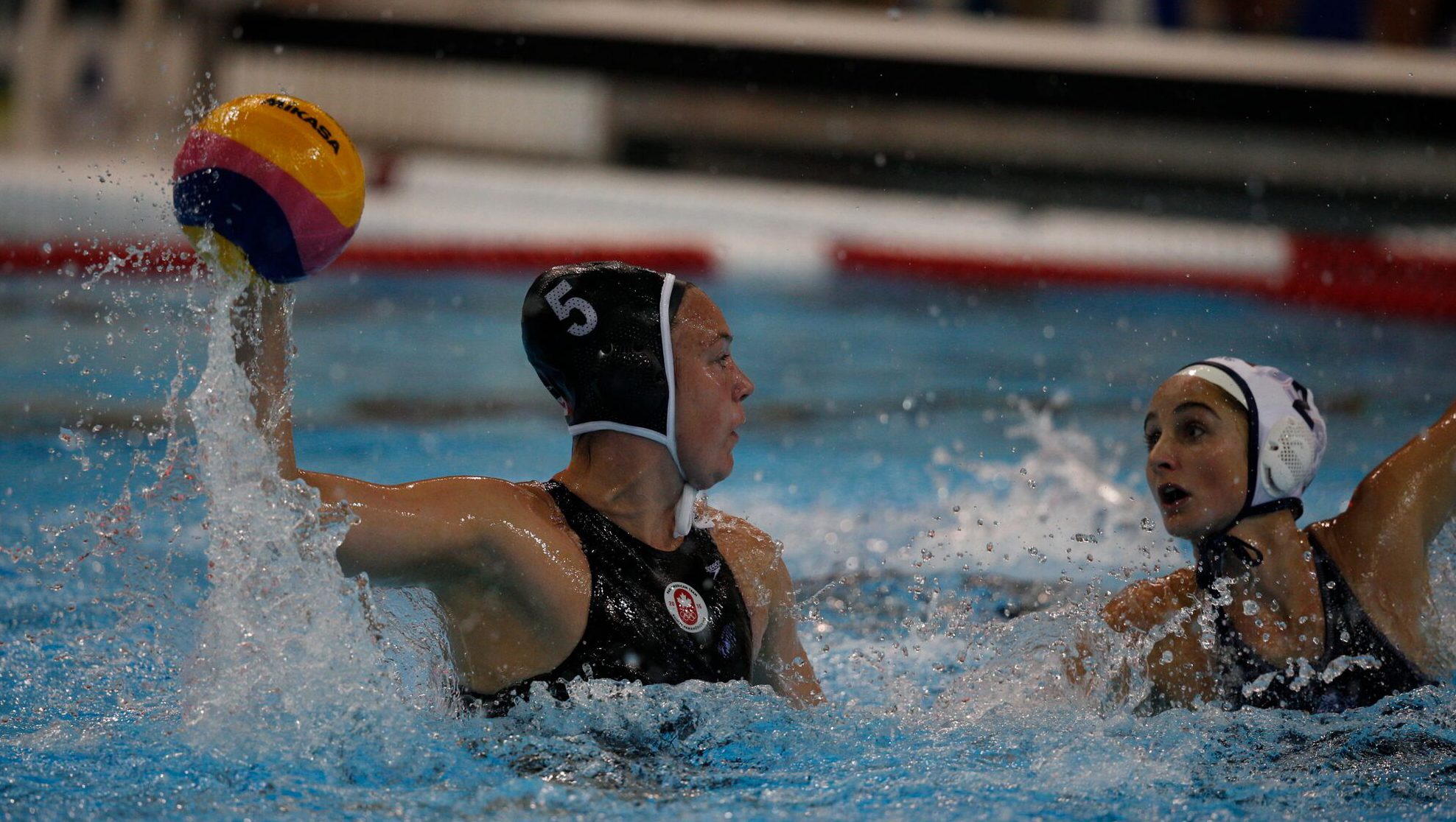 Monika Eggens competes in the final at the 2015 Pan Am Games in Toronto. Canada won silver.

The women’s team will be suiting up July 16 to battle in their first round robin match against Italy. They hit the water next July 18 as they compete against China, and then again on July 20 against Brazil. The women’s crossover matches are scheduled to take place July 22 with the quarterfinals on July 24, the semifinals on July 26 and the medal matches on July 28.

The last time the women’s team brought home a medal from worlds was in 2009 when they captured silver. But this past season saw the squad achieve success at the FINA World League Super Final when they brought home the silver medal. Members of that team also on the world championship roster are Joëlle Békhazi, Krystina Alogbo, Christine Robinson, Emma Wright, Hayley McKelvey, Monika Eggens, Kyra Christmas, Shae Fournier, Elyse Lemay-Lavoie and Jessica Gaudreault. 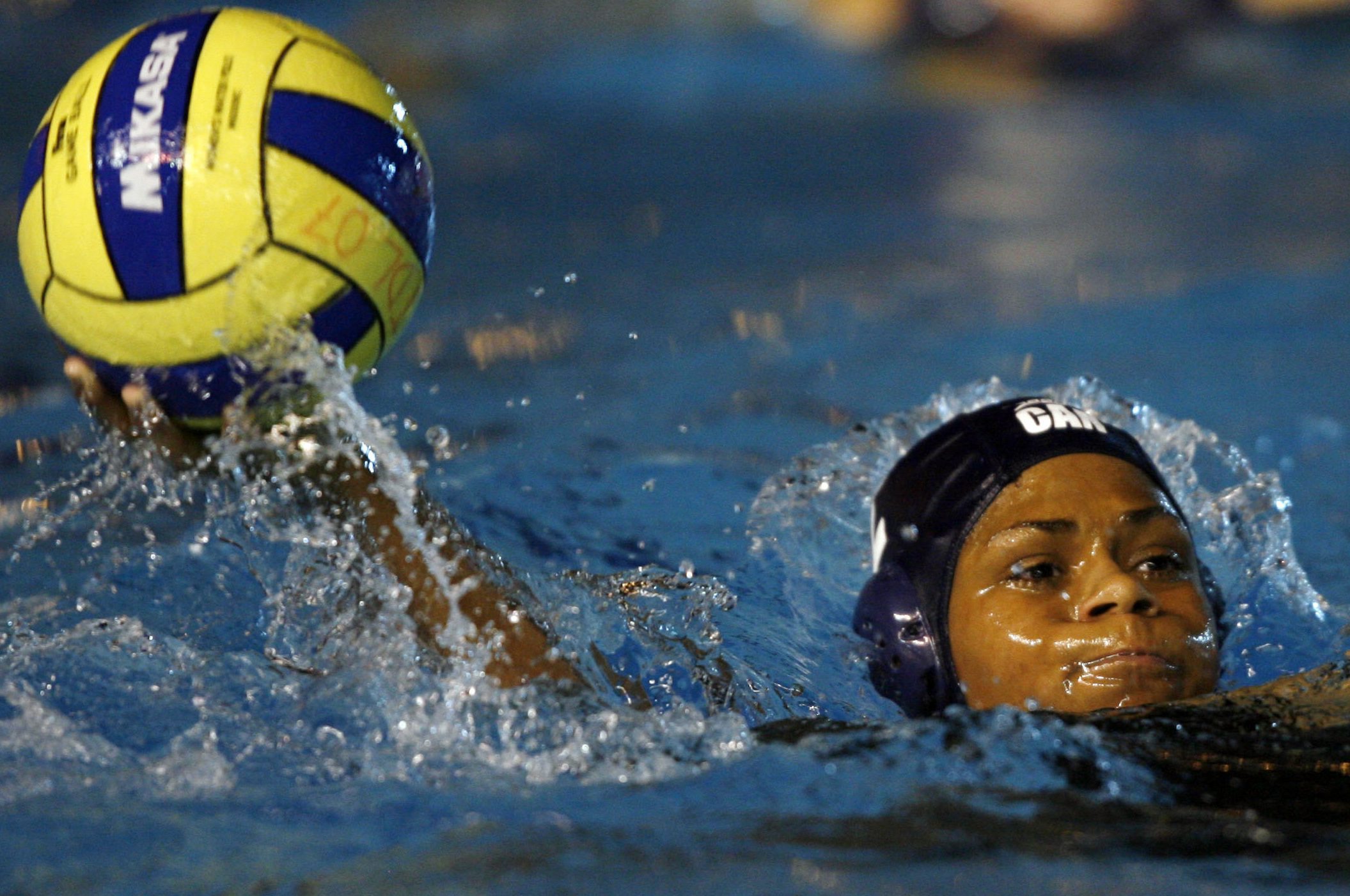 Canada’s Krystina Alogbo, fights to stay afloat as US’ Alison Gregorka, not seen, pushes her down in the 2007 Pan American gold medal game in Rio. (AP Photo/Dario Lopez-Mills)

Three of Team Canada’s female veterans heading to worlds for another chance at gold are Békhazi, Alogbo and Robinson. They’ll be joined by a few of their teammates from the 2015 Pan Am Games team that won silver, including Eggens, Fournier, Gaudreault and Wright. 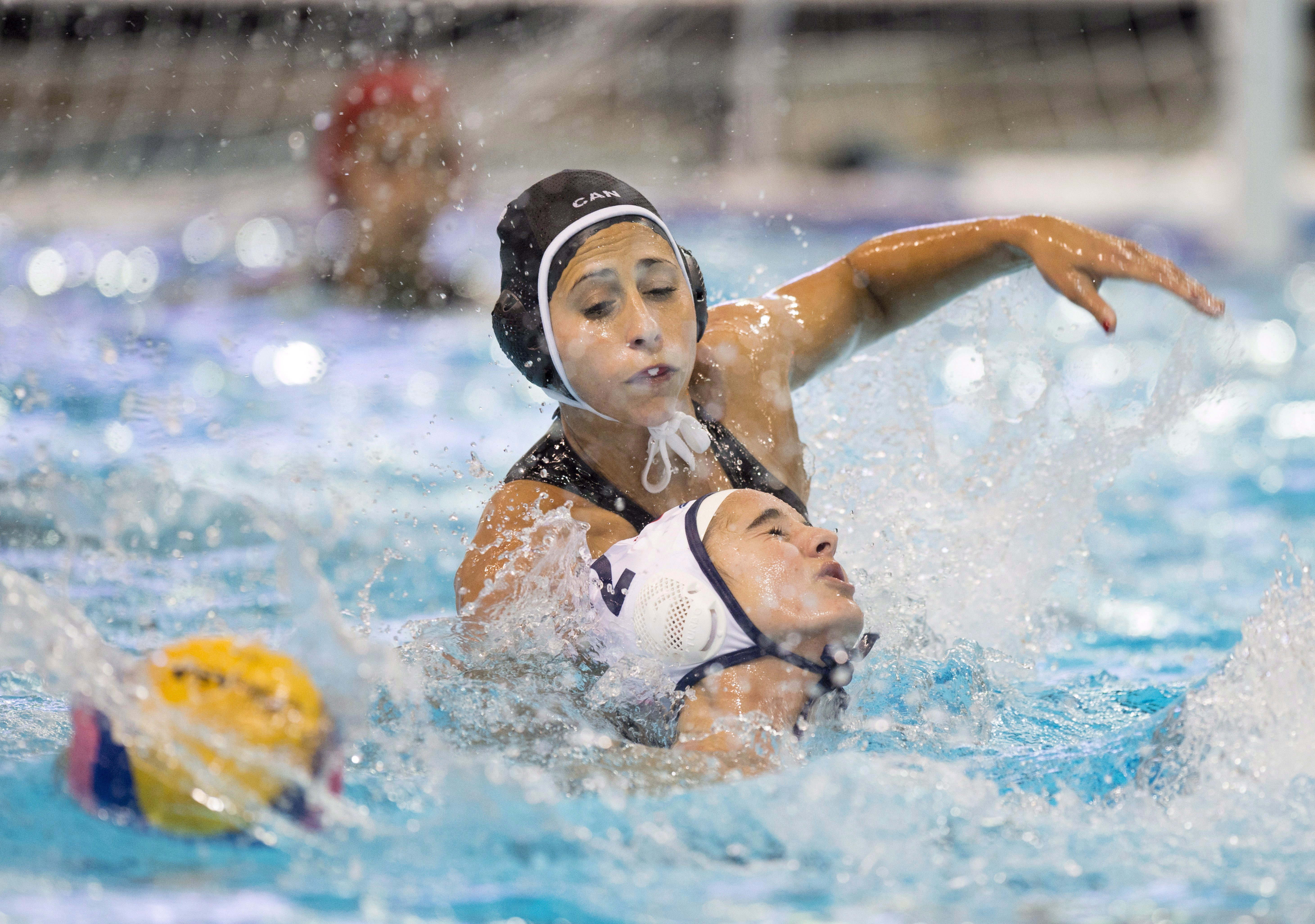 Joelle Bekhazi fights for the ball during the gold medal match at the 2015 Pan Am Games 2015. The USA defeated Canada to win gold. THE CANADIAN PRESS/Darren Calabrese

Békhazi will be hitting the water for her sixth world championships (2007, 2009, 2011, 2013, 2015), having also won a silver medal at worlds in 2009. That same year she was also a part of the team that captured a first-ever silver in the FINA Water Polo World League. More recently, Bekhazi has kept up her reputation as she helped Team Canada win silver at the 2011 and 2015 Pan Am Games. 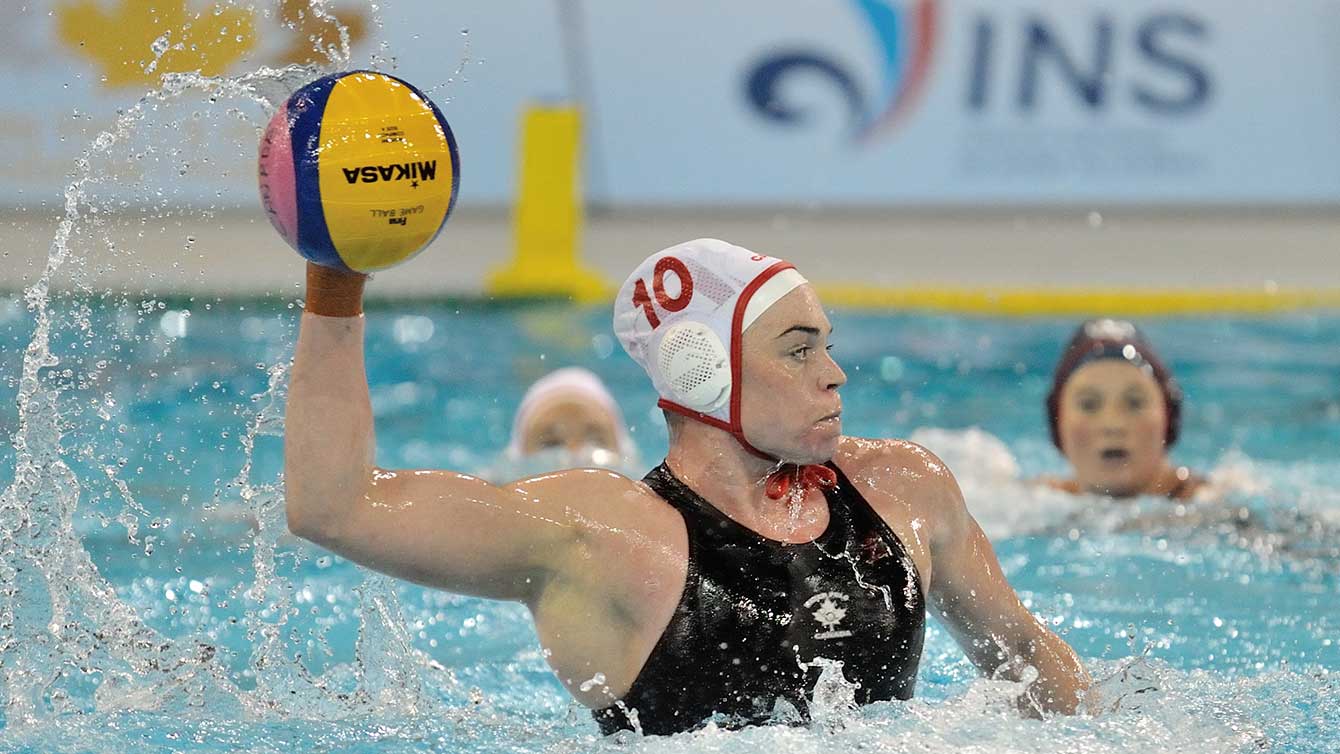 Christine Robinson at Pan Am Games in 2015 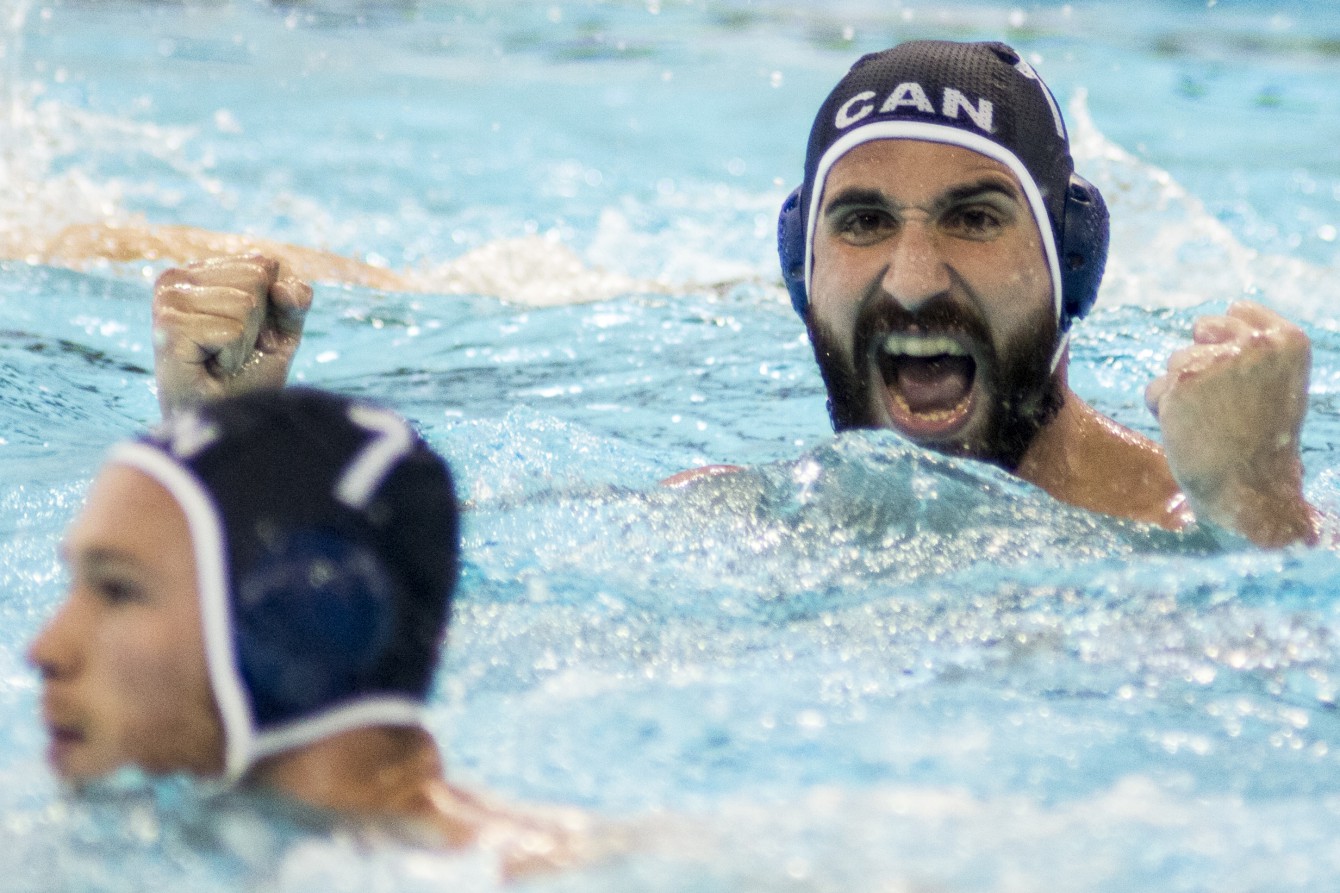 George Torakis celebrates after Canada scores a goal in the men’s water polo semifinals of the 2015 Pan Am Games (Jeffrey Sze/COC).

The men’s team will be diving into the tournament a day after the women, competing in their first round robin match July 17 against Montenegro. They will also face Kazakhstan on July 19 and Brazil on July 21. The men’s crossover matches are scheduled on July 23 followed by quarterfinals on July 25, the semifinals on July 27 and the medal matches on July 29. 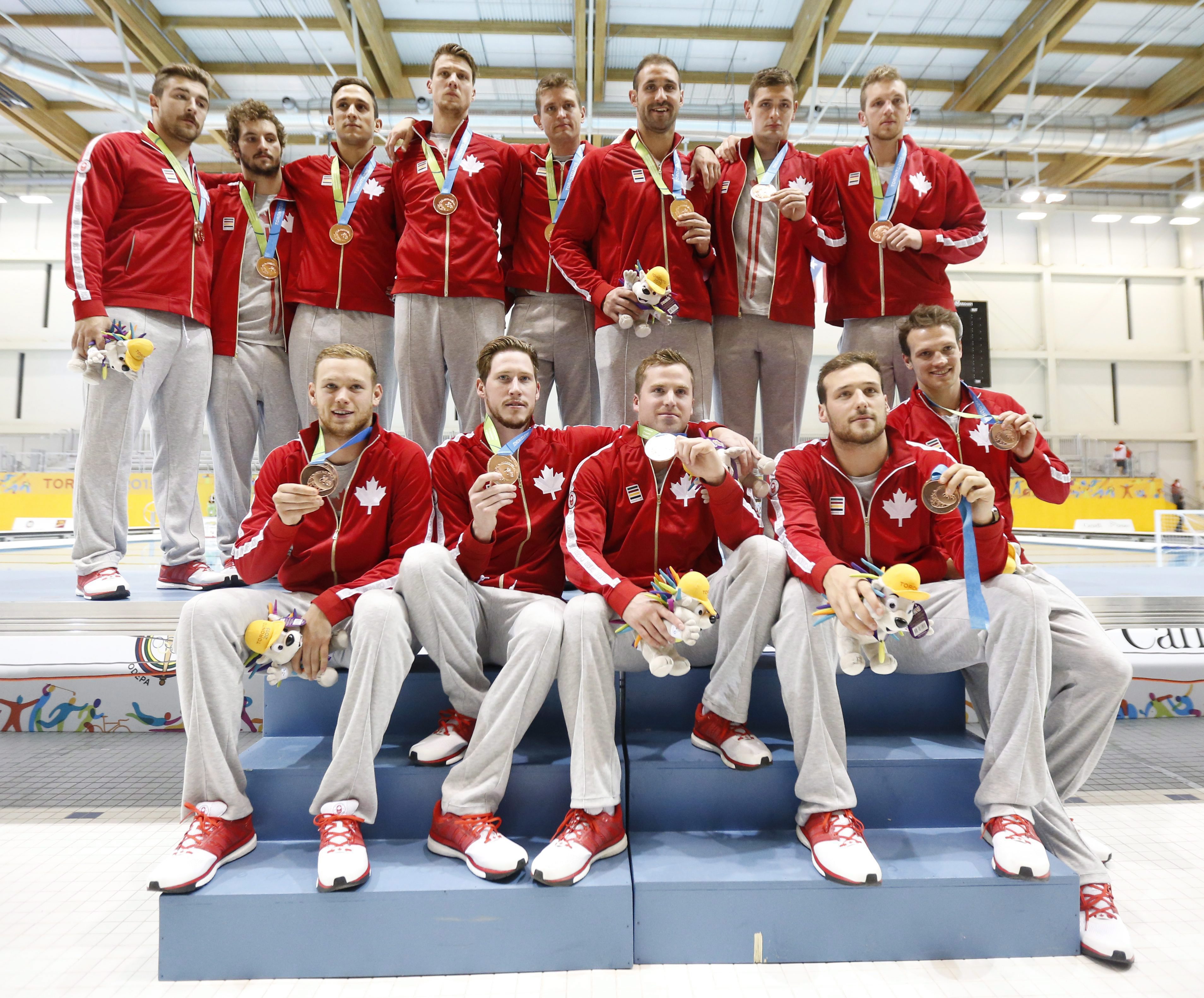 Canada poses with their bronze medals earned in the men’s water polo gold medal tournament at the Pan Am Games, 2015. (AP Photo/Julio Cortez)

The Canadian men have never won a medal at worlds, but did stand on the podium at the 2015 Pan Am Games in Toronto with a bronze medal. Earlier this year they won silver at the UANA Cup, the Pan American event that served as the qualifier for the world championships.

You can help cheer on Team Canada by live streaming the event at www.cbcsports.ca.

Canada’s water polo teams are set to shoot for the podium at worlds
Team Canada and Hudson’s Bay unveil Tokyo 2020 uniform kit
What is the difference between racquetball and squash?
Wearing the maple leaf: Team Canada through the decades
Shuttlecock and balls: The fastest moving objects in sport
Brandon McBride: Keeping His Head on a Swivel