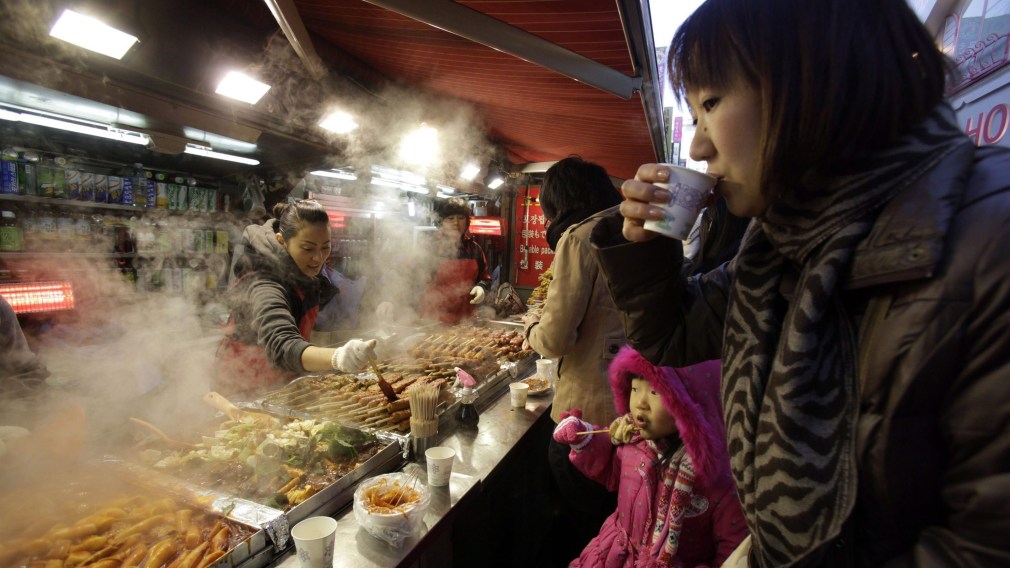 In North America, we’re all familiar with food trucks and hot dog stands when you need a quick bite on the go.

But Korea is a street food paradise, especially at the end of a late night. The stands attract people with their unique options, scents, and tempting flavours.

So whether you’re in Korea for the 2018 Olympic Winter Games or just to play tourist, here are 10 must-try street foods in Korea that are sure to be a treat for your taste buds.

If you love a sweet and spicy combination for a snack then this quick and delicious food option is perfect for you. The dish is made from a combination of Korean pastes and other ingredients that are guaranteed to ignite your palate. If you enjoy eating this snack, I dare you to take a leap forward and add ramen noodles, shredded white cheese, and a hard-boiled egg with sprinkled sesame seeds and green onion.

A delightful street food for all ages, this snack is a potato sliced in a long spiral and evenly skewered on a wooden stick. It is then deep fried, sprinkled with cheese, chili, and other flavourful ingredients. I personally enjoy it best dipped in Ddeokbokki sauce, resulting in a crunchy, sweet, salty, spicy taste. Its unique look is also eye-catching to earn those likes on your Instagram.

You wouldn’t think it, but the corn dog is quite the staple of Korean street food. Not only is it popular, but there are different variations that you may not see elsewhere in the world. Such as the French fry corn dog, a combination of cut up crispy French fries mixed in with the delicious bread coating around the sausage and baked until golden brown. Drizzle some mustard, ketchup or both and you have two snacks for the price of one.

Kimbap is probably the most recognizable Korean snack outside of Korea because of its resemblance to sushi. It differs from sushi because it does not include raw fish, but instead is stuffed with veggies (typically pickled radish, carrots, cucumbers, spinach) and/or slices of egg, ham, imitation crab, beef or tuna. A pleasant touch is toasted sesame seeds for added nutrition and energy boosts. My personal favourite is “chamchi kimbap” which is the tuna version.

I encountered these tasty treats more often during the winter months while living in Korea, so with the Olympic Winter Games there, I would bet this will be a popular snack making its rounds through the streets. They are served up on a skewer paired with steaming Odeng broth guaranteed to warm up your core. They are cheap and filling and don’t worry about paying for it right away. Eat first because you’ll more than likely have more than one.

One of the reasons I love Korean street food is because of the throwback memories to my childhood of eating delicious pink and blue cotton candy without having to be at a crowded amusement park. And because it’s Korea, expect to see cotton candy bundles go to the extreme with their sizes and decorative shapes.

Korean sweet pancakes are one of the most popular street snacks on this list, especially during the winter months because of the hot brown sugar syrup bursting out as you take a bite. Different variations exist as well, such as sunflower seeds and nuts, kimchi stuffing, or bulgogi and cheese. Whichever your heart desires, you will not disappointed.

Also recognized as Korean dumplings, mandu can be either steamed or fried. Both are excellent. These magical balls of flavour differ from other dumplings because the filling is completely different. Mandu includes a mix of minced meat, green onions, ginger, tofu, and garlic stuffed to perfection with a serving of kimchi and soy sauce for dipping.

This unique snack is a favourite among Korean youth because of its delicious taste and goldfish shape. The traditional snack would include a red bean filling, crispy on the outside and gooey on the inside. But be cautious on your first bite. With its growing popularity among tourists and locals, other options have emerged, including cream or custard, making it similar to cannoli.

Are you looking for refreshing beverage to wash down the tasty Korean street food you’ve just consumed? Well look no further, as freshly-squeezed juice stands seem to be on every couple of blocks in Seoul and other big cities. What’s also interesting is the juices are often served in drinkable plastic bags, great for recycling after consumption.