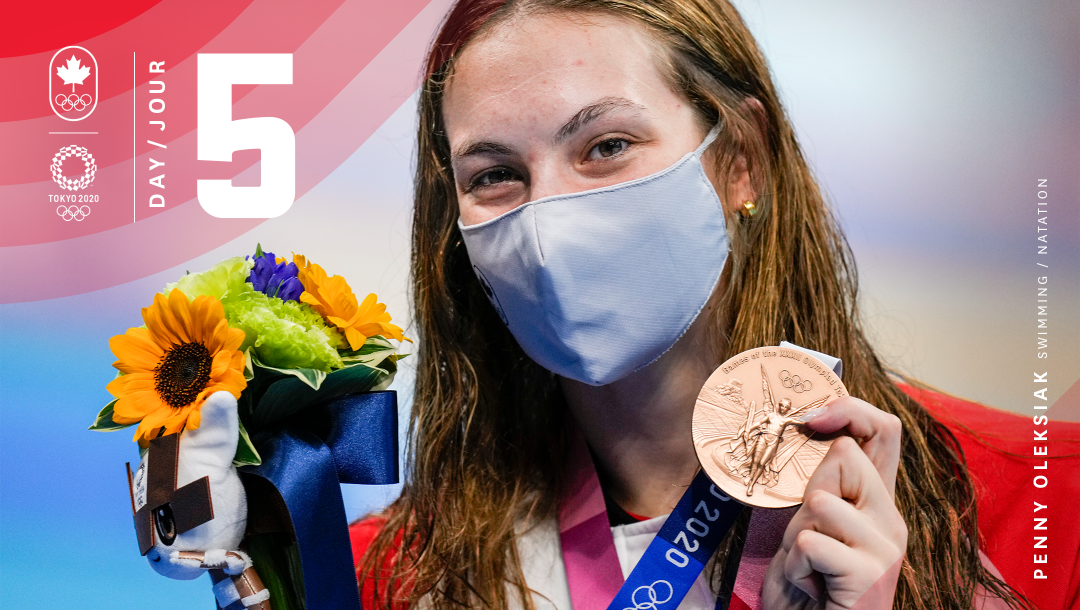 Penny Oleksiak swims into the Canadian Olympic history books, three boats set Canadian records to earn their way into medal races at the Olympic rowing regatta, Michelle Li moves on from badminton group play, and Tammara Thibeault is off to the quarterfinals in boxing.

Those were just a few of the Team Canada athletes in action on Day 5 at Tokyo 2020.

Penny Oleksiak won bronze in the women’s 200m freestyle for her sixth career Olympic medal, making her stand alone as Canada’s all-time most decorated summer Olympian and tying her for the most by a Canadian athlete in any sport. She adds to the silver she won in the 4x100m freestyle relay earlier in these Games, as well as the four medals she won at Rio 2016.

Sydney Pickrem was racing in the final of the women’s 200m individual medley. The reigning world bronze medallist in the event finished sixth. Yuri Kisil and Joshua Liendo competed in the semifinals of the men’s 100m freestyle but did not advance to the final.

Oleksiak was back in action during the night session in the heats of the 100m freestyle in which she is the reigning co-Olympic champion. She and her silver medal-winning teammate from the 4x100m freestyle relay, Kayla Sanchez, both advanced to the semifinals. Markus Thormeyer raced in the heats of the 200m backstroke and finished 16th overall, which was enough to advance him into the semifinals. He was a finalist in that event at the 2019 World Championships.

The first medals were awarded at the Sea Forest Waterway but Gabrielle Smith and Jessica Sevick could not lay their hands on one as they finished sixth in the A final of the women’s double sculls.

Gaby Dabrowski and Felix Auger-Aliassime played in the first round of mixed doubles against second seeds Maria Sakkari and Stefanos Tsitsipas of Greece. They were unfortunately eliminated in straight sets, 6-3, 6-4.

Two Canadian women were in the ring. World bronze medallist Tammara Thibeault started her campaign in the 75kg event with a 4-1 victory in the Round of 16 over Nadezhda Ryabets of Kazakhstan. She is the last Canadian boxer standing after Caroline Veyre was defeated 5-0 in her quarterfinal by Irma Testa of Italy.

Brittany Fraser-Beaulieu and All In just set a Canadian Olympic Dressage Grand Prix Freestyle record with a score of 76.404%, beating coach Ashley Holzer’s score of 71.450% from Beijing 2008.

Five Canadian boats were on the water, all of them competing in multiple races. Seeing their first action in the men’s 470 were Jacob Saunders and Oliver Bone, who sit 16th overall after two races. 49er duo William Jones and Evan DePaul are in 19th place after four races. 49er FX crew Ali ten Hove and Mariah Millen are in 17th place overall after six races. Tom Ramshaw is in 14th place after four races of the Finn class and Nikola Girke is in 24th overall after nine races of the women’s RS:X.

Falling 21-14 against the United States, Canada closed out their Tokyo 2020 tournament against Australia, losing 26-7 to finish in eighth place in their Olympic debut.

Team Canada, led by captain Gordan Perrin, put together their most complete game of Tokyo 2020, winning in straight sets to earn their first win of the tournament against Iran. They will continue preliminary play against Venezuela on Day 7.

Gurpreet Sohi scored four goals in a dominant 21-1 win for Team Canada over South Africa. The Canadians led 9-1 at halftime and added another 12 goals in the second half. The victory improves Canada’s record to 1-2-0 at Tokyo 2020. Their final game of preliminary round action is Sunday against the Netherlands.