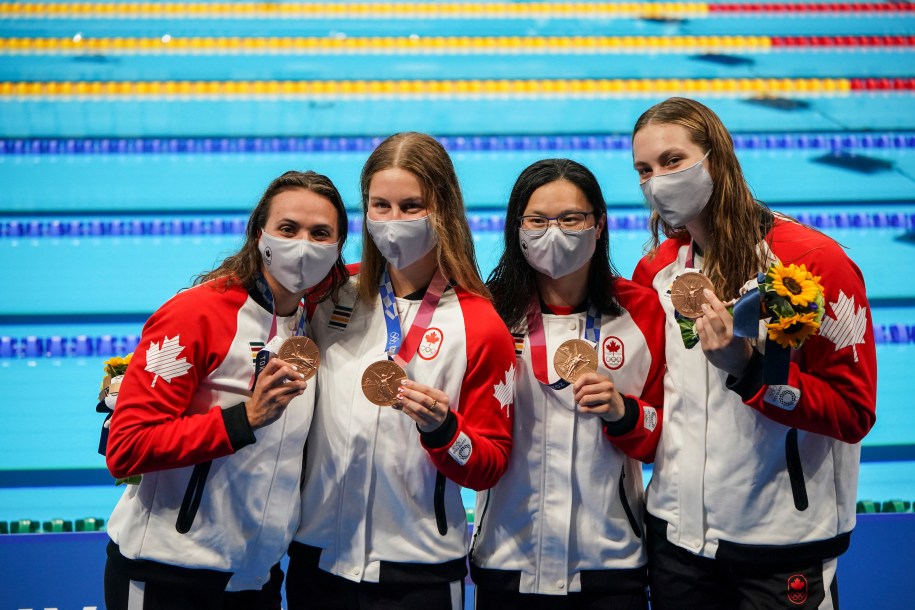 You couldn’t have written a better ending for Canadian swimming at the Tokyo 2020 Olympic Games.

On the final day of competition at the Tokyo Aquatics Centre, Penny Oleksiak anchored Canada to bronze in the women’s 4x100m medley relay. It’s the seventh Olympic medal of Oleksiak’s career, making her the most decorated Canadian Olympian of all time.

But after the race, her focus was entirely on the people who helped get her here.

“Knowing that I have the best girls in the world to race with, I pretty much had a medal in the back of my mind the whole race. I was just like, ‘I’m racing with three of the best swimmers in the world so why should I worry?'”

Sure, this group of Canadian women are known to be an exceptionally tight-knit group. But that was no exaggeration on Oleksiak’s part.

Mac Neil, who won silver with Oleksiak in the 4×100 freestyle relay, claimed the gold medal in the 100m butterfly. Masse, meanwhile, claimed silver in both the 100m and 200m backstroke event.

Sydney Pickrem is no slouch either, having finished just off the podium in the 200m individual medley and 4x200m freestyle relay.

Oleksiak had the opportunity to win her record-breaking medal in the 100m freestyle, an event in which she was the defending Olympic champion. But she finished fourth, just 0.07 seconds behind the bronze medal winner.

That may, however, have been a blessing in disguise.

“I honestly am glad I didn’t win it on an individual [event],” Oleksiak told the CBC after the 4x100m medley relay. “This just makes it 10 times sweeter, knowing that I’ve accomplished this history with girls that are also making history.”

As part of the safety protocol at Tokyo 2020, athletes have been placing medals around their own necks. So when the time came, the honour of placing that history-making seventh medal around Oleksiak’s neck fell to her teammate, Mac Neil.

And it may not be the last time we see these athletes celebrating together on the Olympic stage.