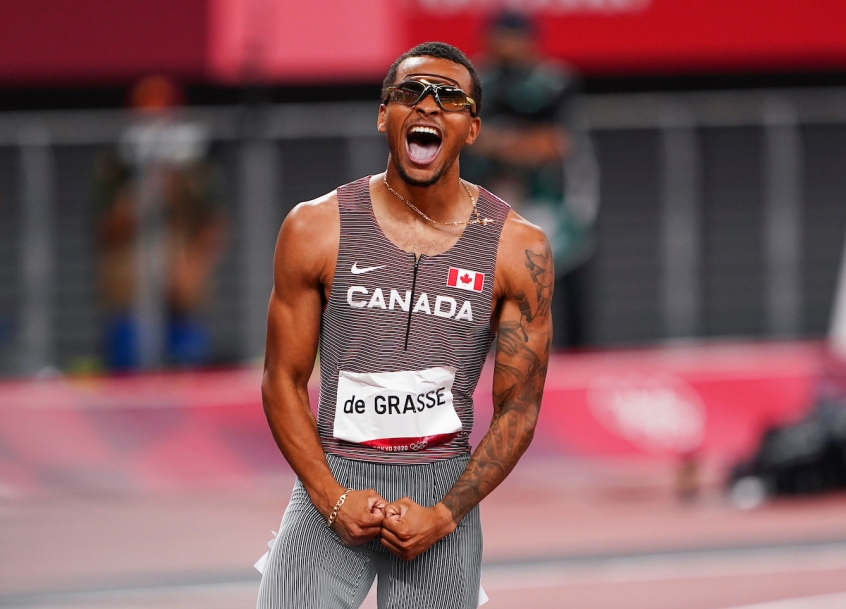 Looking up at the scoreboard as he crossed the finish line, Andre De Grasse knew it was close. With a cry of victory as his face flashed across the screen, he quickly realized — he had become an Olympic champion.

And he did it with a personal best and Canadian record time of 19.62 seconds.

Walking out onto the track and into the blocks, the gold sunglasses were back for the 26-year-old and it couldn’t have been a more fitting choice. Running out of lane six, De Grasse charged out of the bend, splitting through the Americans Noah Lyles and Kenneth Bednarek before edging them out at the finish line.

“I shocked the world, that’s what I came here to do,” said De Grasse. “Everyone was saying the Americans are going to win but I came out here and this is my moment. I knew I had it in me and, like Kobe said, get the job done.”

Fellow Canadian Aaron Brown finished in sixth place with a time of 20.20s in the final. This was the first time since 1928 that Canada had two men in an Olympic 200m final. Coincidentally, those 1928 Games in Amsterdam were also the last time Canada won gold in the men’s 200m, when Percy Williams took the crown.

De Grasse said he knew he had a lot in the tank after breaking his own Canadian 200m record in the semifinals the night prior and was happy to execute his race plan to break it again in the final.

“My coach told me this is your moment, you can run 19.5 out here,” De Grasse said of his preparation going into the final. “Just run the bend, stay relaxed and bring it home. That’s what I tried to do, just tried to execute. Physically I was fit, I just had to be there mentally.”

After what De Grasse has described as falling short the last few years, he was still proud of his accomplishments that included medals at the world championships, but this one definitely feels different.

“Every time I came up short, winning bronze, winning silver, obviously I was young back then, racing the greatest of all time, Usain Bolt. Of course I was still proud of myself, still happy to be at my first Olympics, but I knew going into my second Games, I’m ready,” De Grasse explained.

“I trained an extra year for this, during a pandemic, I knew I was ready,” he continued. “I was a little bit disappointed in my 100 metres, even though I ran a personal best but I knew this was my stronger event and to come out here and make it happen.”

With his gold medal, De Grasse now has two medals at the Tokyo 2020 Olympic Games following his bronze medal performance in the men’s 100m, bringing his career total to five Olympic medals. Canada now has a total of 15 medals in Tokyo and De Grasse isn’t done yet, as he is set to race as a member of Team Canada’s 4x100m relay team.