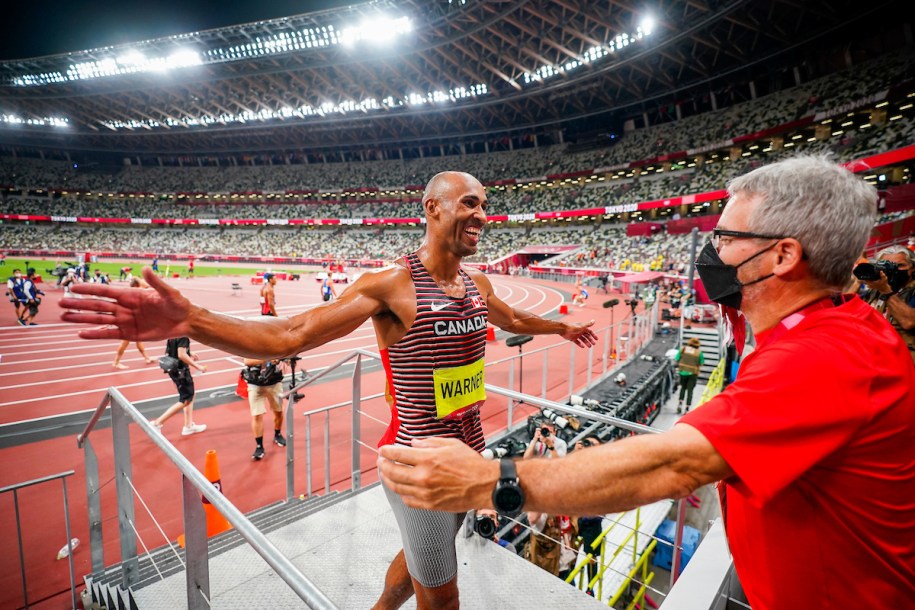 At his third Olympic Games, Warner will now join his childhood idols as he stands atop the podium, celebrating an Olympic gold medal in the decathlon.

“It’s one of those things where when you’re younger you set little dreams and goals, and I just remember watching Donovan Bailey and Catriona Le May Doan celebrating and winning gold medals,” Warner recalled. “Sitting there on the couch and watching it with my mom, telling her ‘I want to do that one day.’ It’s really cool to come out here and finally live that dream.”

He could feel it and Canadian fans could sense it from the very start: this was Warner in top form, physically and mentally. And he showed it at Olympic Stadium, right up through the final 1500m race. With one last kick down the last 300 metres, Warner pushed his way to the finish line, breaking the Olympic record with a total of 9018 points to eclipse Ashton Eaton’s point total of 8893 set at Rio 2016.

“I had a gameplan on where I needed to be, and when I came around at 1200m I was three seconds off the pace,” he explained. “I was like, ‘if I’m going to get this 9000 points I have to go now’, and I gave it everything I had. It wasn’t pretty but we got the job done.”

Getting off to a quick start on both days of competition, Warner took the lead and never looked back, winning with 292 points between him and the silver medallist, world record holder Kevin Mayer from France. Australia’s Ashley Moloney round out the podium finishers. Canadian teammate Pierce LePage finished in fifth with a personal best 8604 points.

Setting Olympic decathlon bests in the 100m (also tying his world decathlon best 10.12 seconds), long jump (8.24 metres), and 110m hurdles, Warner had the competition of his career. It is Canada’s first Olympic decathlon gold medal, and with his new Olympic record, he also shatters his Canadian record of 8995 points, which he set at the Gotzis Hypo-meeting in late May.

The leader after five events at the Tokyo 2020 Olympic Games, Warner started day two of the decathlon the same way he started the first — racing away from the competition. Entering the 110m hurdles as the holder of the world decathlon best time, Warner stormed out of the blocks, quickly separating himself from the rest of the heat. Coming through the finish line with a time of 13.46 seconds (1045 points), Warner shattered German Frank Busemann’s Olympic decathlon best time of 13.47s set in 1996.

The 31-year old Warner couldn’t have been more satisfied with his performance and with his family and friends watching and cheering from London, Ontario, he can’t wait to get to back and celebrate with them.

“It’s hard to put into words when you have these dreams and goals and then they finally come true, you really don’t know how to process that. It’s one of those things where I imagine it’s going to be a little bit easier once I’m around all those people who supported me and helped me get to this point.”

Warner now adds his Olympic gold medal to his bronze medal from Rio 2016, as well as his two Pan American gold medals and three medals (two bronze, one silver) from the World Athletics Championships.

“The experience of my life, I couldn’t be more grateful and I can’t wait to share it with everybody back home.”