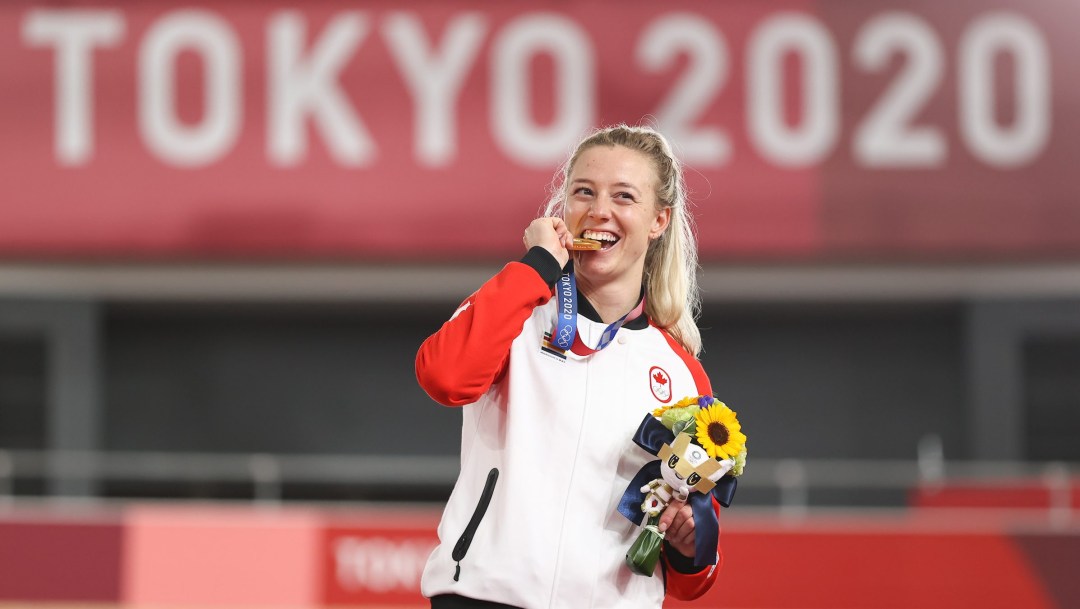 Kelsey Mitchell said she was excited to be cycling against the best in the world in the women’s sprint at Tokyo 2020.

“The best of the best are here,” Mitchell said on Day 13, not long after placing fifth in the women’s keirin. “Everyone is going to go out there and race their best race so I’m excited to see where I end up.”

On Day 16, Mitchell proved that she was the best.

The 27-year-old defeated Ukraine’s Olena Starikova 2-0 in the best-two-of-three sprint final, joining Lori-Ann Muenzer as the only Canadians to ever win a gold medal in track cycling. Muenzer won gold in the sprint at Athens 2004.

“Amazing. I feel amazing,” said Mitchell after her race. “I feel a lot of emotions and all I’m thinking about right now is my family, friends, teammates, Cycling Canada staff and everyone who made this possible. You guys all pushed me to this moment and I am just so grateful and all the hard work has paid off.”

Mitchell led the first race of the final throughout, holding off a late push by Starikova. In the second, Mitchell was the trailing rider but opted to jump in front with about half the race to go. She would lead all the way to the finish line.

Guaranteed a medal just by advancing to the final, Mitchell said it was important to keep her mindset in the right place in order to reach the top step of the podium.

“I really, really wanted (the final) done in two. And I got it done in two which is rare for me because I usually end up going to three,” laughed Mitchell. “That was the cherry on top.

“Just seeing everyone coming together… it was just such a team effort. I’m so grateful for everyone I have around me.”

It’s been quite a rise to the top for Mitchell. After spending five years as a varsity soccer player at the University of Alberta, Mitchell attended the RBC Training Ground in 2017 where she was identified by Cycling Canada. She began training with the national track cycling team in 2018 and won three medals at the Canadian Championships later that year.

In 2019, Mitchell won gold in sprint at the Pan Am Championships and Lima 2019. She also owns the world record in the event with a flying lap time of 10.154s.

Now Mitchell is adding an Olympic gold medal to that already impressive résumé. Not bad for someone who only began riding in a velodrome just a few years ago.

Mitchell won’t be an unknown or an underdog at sprint events moving forward, which is something she takes pride in.

“There’s always pressure. My background on my phone has been ‘pressure is a privilege.’ I appreciate the pressure and I know I’ve earned it.”

Mitchell advanced to the sprint final after defeating Germany’s Emma Hinze 2-1 in the best-two-of-three semifinal. Mitchell won the first race but was beaten down the stretch by Hinze in the second. In the decider, Mitchell capitalized on Hinze opting to slow down mid-race, cutting past the German to gain — and maintain — the lead.

The day prior, Mitchell defeated her Canadian teammate, Lauriane Genest, in the quarterfinal to advance to the semi. Genest, who won bronze in the women’s keirin, finished eighth overall in the sprint event.

Mitchell hopes that Tokyo is just the beginning of a strong stretch for Canada in the velodrome.

“Canada’s a threat and I think we’ve proved that here. We’re strong, we’re some of the best. Cycling Canada is bringing it to the world.”