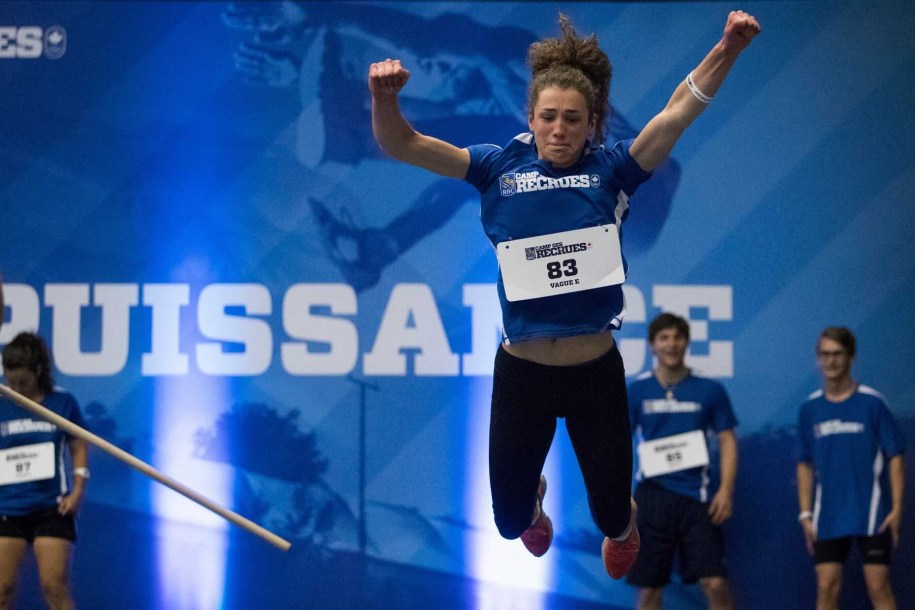 It’s been a series of twists, flips and turns for Marion Thénault, a gymnast turned aerialist.

From sticking landings on a mat to sticking them on snow, she has used her unique skill set to pursue her goals of being part of Team Canada at the Beijing 2022 Olympic Winter Games.

After being identified via RBC Training Ground in 2017, Thénault made her name known just four years into her freestyle skiing career. The Sherbrooke, Quebec native went from not knowing anything about the sport to being one to watch after she won bronze at the World Cup in Moscow in January. The third-place finish was an especially impressive feat given it was her first World Cup season.

“At the beginning of the season I really just wanted to see what my place would be on the World Cup tour,” Thénault told Olympic.ca. “After the first World Cup in Finland I finished fifth and I vividly remember being like, ‘Okay I want to podium now’. That was my goal for every single World Cup. To land in the top three.”

After accomplishing her goal of landing on the podium in Russia, she soon went on to earn her first World Cup victory in Kazakhstan just two months later, making her dreams a reality, but also leaving her hungry for more. Now, Thénault is looking ahead to bigger goals, which go beyond just competing at the upcoming Winter Games.

Getting to her first international podium was not a smooth or seamless transition for the now-21-year-old. Despite knowing how to do tricks in the gym, Thénault not only had to learn how to land similar tricks on skis just inches wide but had to learn one particularly important component of the sport – how to ski.

“My first year was essentially learning to ski,” said Thénault. “I had a ski coach, a private ski coach [Rémi Belanger] and would ski three to four times a week at a little mountain north of Montreal. He really helped me. He made me discover how fun skiing was; he wanted me to have fun and discover all the aspects of it. At the same time, I would learn the aerial twisting techniques on the trampoline, so I was really preparing myself to fully jump on snow without actually jumping because I wasn’t ready.”

Thénault pushed her body and is now at ease reaching speeds up to 58 kilometres per hour as she travels into a jump before flying 35 feet in the air to perform triple twisting double flips.

What she was able to accomplish would be scary for any seasoned athlete, let alone learning how to do it all in such a short time. Despite the learning curve, one aspect of it all stayed the same, and that is her mindset going into every jump.

“I use key words a lot. I have things I tell myself at very specific points through the jump. I will go through those words and then once I take off in the jump, then I know if it’s going to be a good one or a bad one. I know immediately, and then I adjust in the air.”

Thénault’s arrival has certainly had an impact on the rest of the Canadian aerials team, as noted by 2018 Olympian Lewis Irving who returned after missing the 2018-19 season due to injury to be amazed by his new teammate.

“Having Marion was definitely a huge kick in the butt at the beginning,” Irving told Olympic.ca. “Because I came back after being away for a year, then there was this new girl rookie on the team that was out-performing everybody, working super hard and setting the bar really high […] It’s good to have and makes it so we have a really strong team that wants to push and it’s a great thing.”

While her dedication inspires her teammates, Thénault can’t help but to think of her own motivations, especially after seeing other RBC Training Ground athletes not only fulfill their aspirations of making the Olympic team, but also becoming Olympic medallists.

During Tokyo 2020, Thénault witnessed the possibilities of what can happen thanks to RBC Training Ground. Kelsey Mitchell might be the first athlete to come to mind, as the varsity soccer player-turned-track cyclist won Olympic sprint gold just a few years after she rode on a velodrome for the first time in her life.

“It just proves to me it is possible to have a few years in the sport and still be in the top in the world and I think that’s what I am aiming for,” said Thénault. “I don’t have as much experience. But as she [Mitchell] proved, and many other RBC Training Ground athletes prove, it is possible to get in that top very quickly. Because of our backgrounds and because we don’t start from zero, of course, we start from enormous backgrounds and then we have the work ethic and we are used to training, so that also helps a lot.”

Thanks to RBC Training Ground, Thénault was able to find her passion in aerials. She took her nothing-to-lose attitude into a regional final event where the girl who was too tall for gymnastics had her eyes opened to a sport that can now take her to the biggest stage on earth.

RBC Training Ground is a talent identification and athlete funding program that seeks to find young athletes with Olympic potential and provide them the resources needed to achieve their podium dreams. Athletes between the ages of 14 and 25 are eligible to participate in testing events across Canada where numerous National Sports Organizations look to recruit talent for future success.