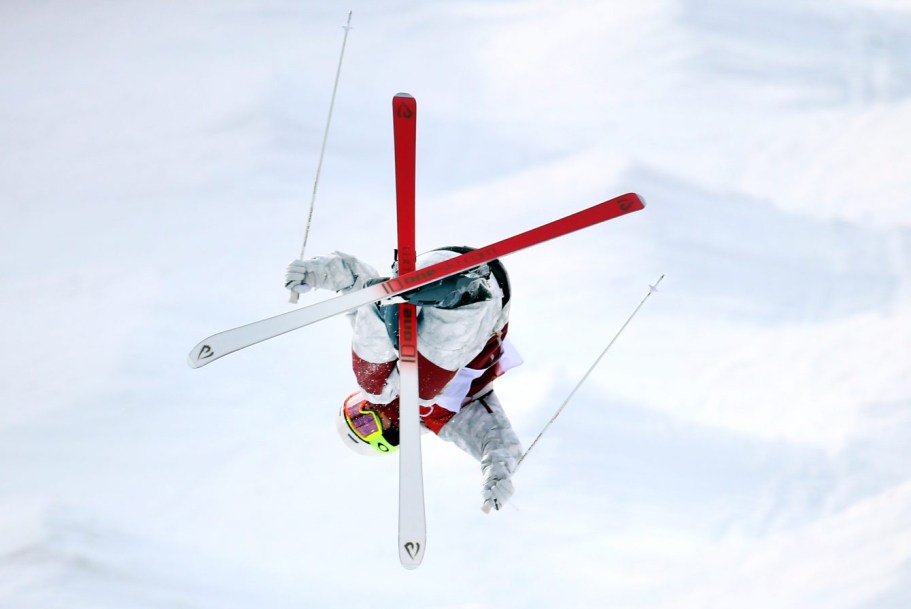 If there’s one Canadian athlete that everyone will be watching at Beijing 2022, it’s Mikaël Kingsbury. The good news for him (and for all die-hard fans of the King of Moguls) is that he’s more prepared than ever to defend his Olympic title… and to inspire his teammates to do their very best as well.

“I’m exactly where I want to be right now.”

That’s how Kingsbury described his state of mind at the beginning of the season. His goal? To be at the top of his game in early February to vie for his second Olympic gold medal at Beijing 2022. With six podium finishes in seven moguls events this season (for a career total of 101, including 71 wins), the all-time best feels even more ready and confident than he did for his first two Olympics… where he won silver (2014) and gold (2018).

When asked if he’s feeling extra pressure in his quest for another gold, Kingsbury says it’s quite the opposite. “I feel less pressure because I’ve done it before. When I was preparing for my last Olympics, I was asked a lot of questions. That was the only medal I was missing: the Olympic gold medal. [Today,] I don’t feel like I’m going to defend my Olympic gold medal. I have a great opportunity to win a second one, but I know I’m going to be an Olympic champion for the rest of my life.”

Along with that confidence and calm, Kingsbury has another advantage: his adaptability.

As is the case for most athletes about to compete in Beijing, moguls skiers didn’t participate in the traditional test events. They didn’t take place due to the pandemic. Test events are competitions held at venues for the upcoming Olympics so that organizers and athletes can try them out — a kind of dress rehearsal.

This means that skiers will encounter a course they’ve never skied before. But what could be an added stressor for Kingsbury is actually another advantage.

“We’ll need to adjust very quickly,” said Kingsbury. “I think it’s going to be tough for everyone. Whenever a course is tough, it makes the best of us stand out. When it’s hard, it’s usually a little better for me. I think that’s one of my strengths.”

For this Olympic cycle, the GOAT (Greatest of all Time) is the veteran of the Canadian moguls team. That experience will be absolutely invaluable to his younger teammates.

Laurent Dumais is the other Canadian who earned an Olympic ticket (his first!) in the men’s moguls event. According to Dumais, while Kingsbury is obviously a role model for the rest of the team, it’s all about helping each other.

“We help each other in many ways, explained Dumais. “We push each other that’s for sure. And we just push each other during training. And we are just trying to help each other also giving tips for certain jumps and adjusting for certain situations. I also am just trying to learn from him how he attacks some of the obstacles during training and during competition. I want to learn from him how he manages stress and how he prepares for big events.”

For Brenden Kelly, who has been on the national freestyle team since 2014 but is not competing in Beijing, it’s Kingsbury’s unwavering confidence that drives him. “It seems to me it’s not just confidence. Every run he knows he can do it and there is sort of no wavering in his mind. And the way he approaches, the calmness to what is demanded of him is something I really look up to.”

What about Kingsbury? How does he feel about being the team’s wise man?

“It’s a new chapter for me. I went to the Games with Alex (Bilodeau), Marc-Antoine (Gagnon) and Philippe (Marquis). I have many memories with them. Now, we have blank pages and we’ll write our own chapter.”

For this new chapter, Kingsbury believes he’s leading by example. “Every time I go to the gym or hit the snow, I work really hard, but I’m also always open. My teammates know they can ask me a question anytime. They’re always welcome.”

At Beijing 2022, the King of Moguls will not only defend his Olympic title, but the country’s as well. Canada has been on top for 12 years thanks to Bilodeau’s consecutive triumphs in Vancouver 2010 and Sochi 2014, before Kingsbury took over in 2018. With a solid and united team behind him in China and Canada alike, and peak physical fitness and incredible mental strength in tow, Kingsbury only needs to add one magic ingredient to his recipe for success: fun.

“I really had fun at PyeongChang 2018. Now I know how to do it, and I’ll have more fun with the process. When I’m confident in competition and having fun, there’s a fire burning inside me. That’s the most important thing. That’s what I want to feel at the Olympics.”