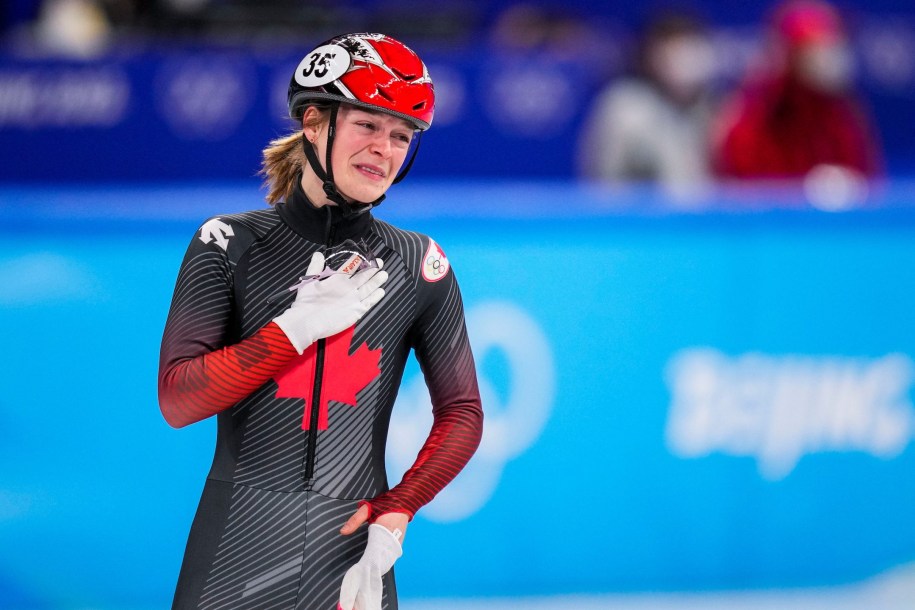 Kim Boutin ended PyeongChang 2018 by carrying Canada’s flag in the Closing Ceremony, an honour bestowed on her after winning three medals – a silver and two bronze – in short track speed skating.

Now, in her second Olympic Games, Boutin is picking up right where she left off.

The 27-year-old won Canada’s first short track speed skating medal of Beijing 2022 on Monday, claiming bronze in the 500m. She won bronze in the same event four years ago – a race that saw South Korean skater Minjeong Choi eliminated for bumping Boutin, pushing the Canadian onto the podium.

Boutin received online threats and bullying after that 2018 race. She’s hoping for a much more positive all-around Olympic experience in Beijing.

“I really went into this competition with the goal of being in union with the ice and to let go of all the emotions that were going to come. The last games were very emotional and difficult for me,” Boutin told media in French after the race. “Take it step by step.”

Despite the challenges she faced in PyeongChang, Boutin had quite a showing. She became the second woman to ever win a medal in all three individual short track events at one Olympic Games, adding a silver in the 1000m and a bronze in the 1500m to her 500m bronze. Her attempt at repeating – or perhaps even bettering – that impressive feat is off to a strong start in Beijing.

The tension could be felt at Capital Indoor Stadium ahead of Monday’s final. The first attempt to start the race was halted when Boutin committed a false start. The second attempt ended just a few seconds in after Italy’s Arianna Fontana fell after clicking an opponent’s blade. The officials allowed the race to start over for a third time.

Boutin maintained her spot in third for most of the race, holding off China’s Yuting Zhang. Fontana won the gold while Suzanne Schulting of the Netherlands took silver.

The Sherbrooke, QC native said she was proud of her performance.

“I think it was a very tough race with Arianna and Suzanne, two athletes I admire very much. I am very happy with my third place.”

Boutin narrowly advanced to the final. After jumping out to a quick start in the semifinal, Fontana took the lead late in the race. With only the top two skaters advancing, Boutin just edged Elena Seregina of the Russian Olympic Committee in a photo finish for the second spot.

“I am pretty happy about it,” Boutin said about winning bronze. “It’s incredible to be here. I had a little difficulty in the semifinal but being in the final with these amazing skaters, with Suzanne Schulting and Arianna Fontana, it’s always exciting. They are incredible athletes. I am a big, big fan of them.”

Boutin has been busy since PyeongChang, winning medals in several world championship events. She came to Beijing ranked second in this season’s 500m World Cup standings after winning the overall title in 2019-20. She also holds the world record in the event, posting a time of 41.936 in 2019, becoming the first woman to register a time under 42 seconds.

Even with all the on-ice success, Boutin said she has had her challenges over the past four years, making the bronze medal win even sweeter.

“Yes, I was very emotional. It has been a rocky road over the last four years. The whole personal process behind it made me emotional after the race. I am very proud that I felt comfortable on the ice without any fear. A successful final.”

Canada’s Alyson Charles raced in the same semifinal as Boutin, finishing fourth, which pushed her into the B final where she placed third.

Charles, Boutin and fellow Canadian Florence Brunelle all skated in the same quarterfinal. Boutin finished first while Charles was advanced to the semis after Brunelle was penalized.

On the men’s side, both Pascal Dion and Jordan Pierre-Gilles didn’t advance past the quarterfinals. Racing in separate quarters, Dion posted no time after a fall while Pierre-Gilles was penalized.